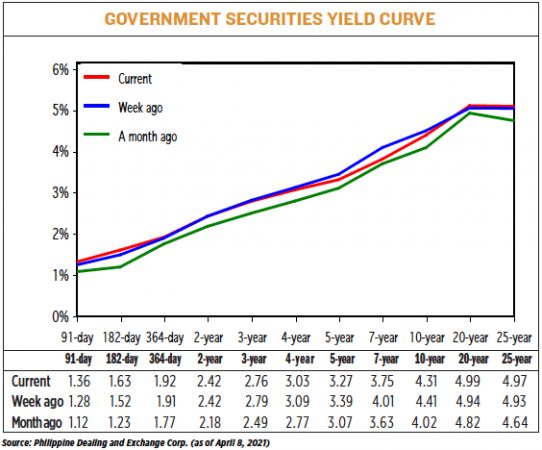 YIELDS ON government securities (GS) ended mixed last week after the slower-than-expected March inflation print and the release of dovish minutes from the US Federal Reserve’s latest policy meeting.

GS yields, which move opposite to prices, went down by an average of 2.7 basis points (bps) week on week, based on the PHP Bloomberg Valuation Service Reference Rates as of April 8 published on the Philippine Dealing System’s website.

Local financial markets were closed last Friday in observance of the Day of Valor.

“[Last] week, buying momentum in the local GS space was spurred by the slower-than-expected March inflation print as well as lower US Treasury yields. Overall, the GS curve ended the week flatter with yields in the belly (five- to 10-year sector) outperforming the rest of the curve,” First Metro Asset Management, Inc. (FAMI) said in an e-mail on Thursday.

“While yields are still higher month on month, the disinflation surprise led to some buying in oversold bonds across the curve,” it added.

Aside from the slower-than-expected March inflation rate, yields “were likewise pulled down by some caution ahead of the release of the US Federal Reserve policy minutes, which reiterated its dovish monetary policy stance while keeping an optimistic outlook on the US economy,” a bond trader said in an e-mail on Thursday.

The government on Tuesday reported that the March headline inflation rate settled at 4.5%. This was slower than the 4.7% seen in the previous month but faster than the 2.5% posted in March 2020.

The March print was slower than the 4.8% median in a BusinessWorld poll but was within the 4.2-5% estimate range given by the Bangko Sentral ng Pilipinas for the month.

Meanwhile, the minutes of the Fed’s March 16-17 meeting showed the US central bank remains cautious over the coronavirus pandemic and will continue to support the world’s largest economy until its recovery is more secure, Reuters reported on Wednesday.

With their own forecasts projecting the strongest run of US economic growth in nearly 40 years, “participants agreed that the economy remained far from the (Fed’s) longer-run goals and that the path ahead remained highly uncertain,” the minutes showed.

“For [this] week, we may continue to see persistent demand in the local bonds space should global bond yields continue to trade within range,” FAMI said.

“We see the lower inflation trend as well as reduced economic activity following the implementation of stricter lockdown measures to prevent the yield curve from steepening in the near term,” it added.

For the bond trader: “Local yields might track its global peers to move higher [this] week on expectations of stronger inflation reports from the US and the eurozone. Moreover, global optimism might likewise prevail amid a potentially upbeat Chinese economic growth report for the first quarter of 2021.” — Jobo E. Hernandez

A taste of Spain’s Rioja

Brady told to leave park closed due to COVID-19