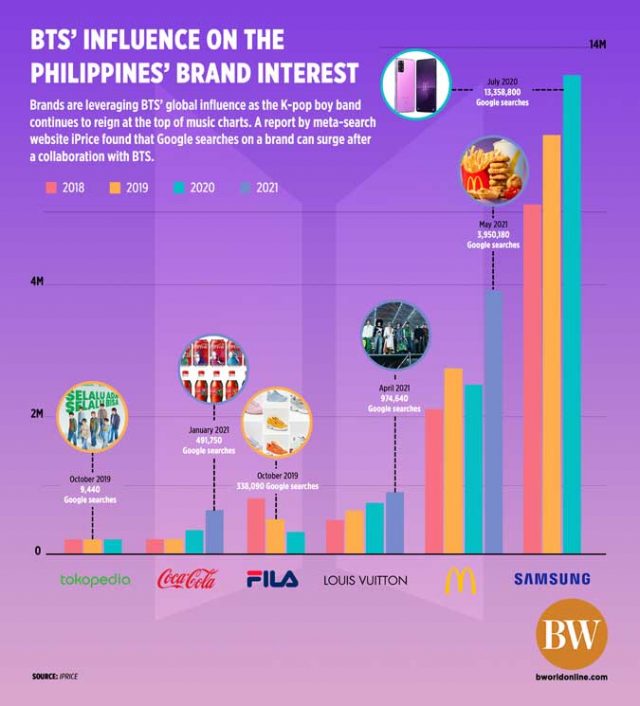 Brands are leveraging BTS’ global influence as the K-pop boy band continues to reign at the top of the music charts. A report by meta-search website iPrice found that Google searches on a brand can double after a collaboration with BTS.

Other collaborations include a BTS edition of Samsung’s Galaxy S20+ in July 2020, as well as with Tokopedia, an Indonesian shopping site, in October 2019.

A separate iPrice study revealed that a devoted member of the BTS Army — as the group’s global fan base is called — spends an average of $1,422 on the group’s merchandise, concert tickets, and albums.

In the Philippines, the BTS member with strongest pull is Jungkook, followed by V and Jimin. This trend carries over to the rest of the Southeast Asian region, iPrice found. — Patricia B. Mirasol

The success of BTS’ brand collaborations is based on the search volume seen on Google Keyword Planner. The searches recorded were during a three-month period during BTS’ collaborations, announcements, or product releases.  The search volume of each brand is compared to the same three-month period of each year from 2018 until 2021.  The brand keywords used depends on how it’s referred to in each country (e.g. in the Philippines, keywords used for McDonald’s included “McDo.” Popularity was based on each country’s Google searches per BTS member in the last six months (December 2020 to May 2021). The keywords used are each member’s stage name with the keywords “BTS” after (e.g. “V BTS”). For Thailand, keywords used were in Thai characters. The tool Google Keyword Planner was used to obtain the search volume.

Do these three popular anti-ageing skincare ingredients work? Here’s what the evidence says

Cars and planes and watches, Oh my!