THE PHILIPPINES continued to see a decline in economic freedom, falling seven spots to 80th out of 177 economies in the 2022 global index released by US think tank The Heritage Foundation.

The Philippines recorded a score of 61.1 in The Heritage Foundation’s 2022 Index of Economic Freedom, lower than its score of 64.1 in the previous year’s index. This score is above the Asia-Pacific average of 58.5 and the global average of 60.

The country ranked 73rd out of 178 economies in the previous year’s index. 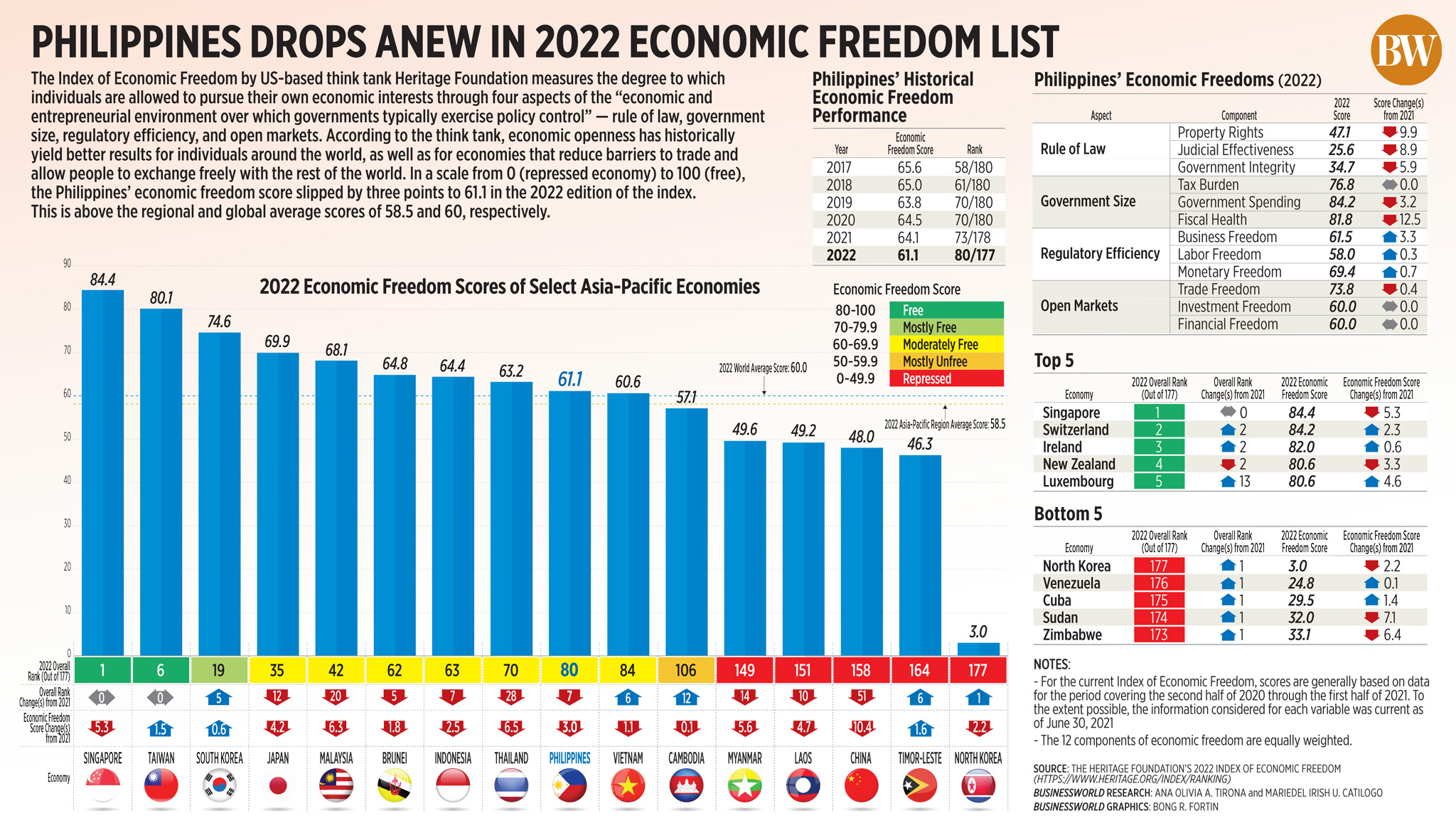 The Philippines’ economic freedom is considered “moderately free” based on its score and ranking.

“Dragged down by decreased scores for fiscal health and monetary freedom, the Philippines has recorded a 4.5-point overall loss of economic freedom since 2017 and has fallen to the bottom ranks of the ‘Moderately Free’ countries,” The Heritage Foundation said.

“The tax burden is not heavy, and trade freedom is a bright spot, but judicial effectiveness and government integrity exhibit weaknesses.”

The Philippines ranked 15th among 39 Asia-Pacific countries included in the report which assesses rule of law, government size, regulatory efficiency, and open markets.

Singapore was the world’s freest economy, followed by Switzerland, Ireland, New Zealand, and Luxembourg. On the other hand, North Korea was the least-free nation.

The Heritage Foundation said the index examined economic policies and conditions from July 1, 2020 to June 30, 2021.

Overall, the index showed a decline in economic freedom around the world, which the report attributed to the “unwise policies” to address the coronavirus disease 2019 (COVID-19) pandemic.

“Most every economy included in the 2022 index experienced negative growth in 2020, which is not surprising given that so many of the actions that governments have taken in the name of protecting public health have also reduced economic freedom. These restrictions have exacted a cost in terms of human well-being that must be added to the enormous cost of the death toll from the disease itself,” The Heritage Foundation said in a statement.

While trade freedom is a “bright spot,” the Philippines’ score slipped by 0.4 to 73.8. Investment and financial freedom scores were unchanged at 60.

“Foreign investment is generally welcome, and the investment code treats foreign investors the same as it treats domestic investors… However, investment in several sectors remains restricted. The financial sector, dominated by banking, is relatively stable. Capital markets are underdeveloped,” the think tank said.

“Courts are inefficient, biased, corrupt, slow, and hampered by low pay, intimidation, and complex procedures… Corruption and cronyism are pervasive. There is little accountability for powerful politicians, big companies, or wealthy families,” The Heritage Foundation said.

The country also recorded a drop in its scores for government spending and fiscal health, while the tax burden score remained at 76.8.

“To improve the degree and quality of economic freedom in the country, it is clear that the next administration should manage our resources for economic and social development more efficiently,” University of Asia and the Pacific Senior Economist Cid L. Terosa said in an e-mail interview.

He noted key tax reforms should be sustained and implemented to ensure the country’s fiscal health would be restored.

Calixto V. Chikiamco, Foundation for Economic Freedom president, said in a mobile phone message that the country is likely to see a higher economic freedom ranking next year, following the passage of reform measures such as the amendments to the Retail Trade Liberalization Act.

Mr. Chikiamco added that the participation of the Philippines in the Regional Comprehensive Economic Partnership will also help improve economic freedom.

“To improve the country’s ranking the next administration can abolish quantitative restrictions on agricultural commodities, such as corn, fish, and pork and establish low tariffs for them instead. It can open up the renewable energy sector to foreign investments and it can combat corruption by passing the Freedom of Information Act,” Mr. Chikiamco said.

“While government spending and fiscal health contributed to the drop during the pandemic, the ‘unforced errors’ were in government integrity, judicial effectiveness, and property rights. These can be dramatically and then steadily improved by a new administration with the vision that believes in these values and has the credibility and backbone to deliver them,” Mr. Alcuaz said.