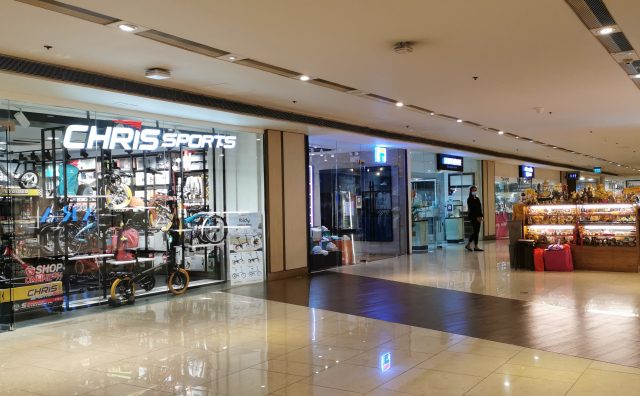 DELIGHT CALIBJO ENTE reluctantly brought her five children to the Ayala Malls Solenad in December after their constant nagging, weeks after the government allowed minors out amid a coronavirus pandemic.

“They were really happy,” she said in a Facebook Messenger chat last month. “They were asking us to buy all the toys they saw and they didn’t want to go home.”

Foot traffic at Ayala Malls rose to as much as 60% of pre-pandemic levels after the quarantine in most areas of the country was lowered to Level 2 amid decreasing coronavirus infections. The rate reached as much as 70% on weekends.

That was before President Rodrigo R. Duterte raised the lockdown level to No. 3 again in Manila, the capital and nearby cities after an infection surge during the holiday. It will start today (Jan. 3) until Jan. 15.

Mall revival and the rest of the Philippine economy is threatened by the spike if it leads to stricter quarantines again especially in the capital region.

The Philippines reported 4,600 coronavirus infections on Jan. 2 — the highest in over two months — probably spurred by the highly mutated Omicron variant. At least 14 Omicron cases have been detected locally.

Infections would probably multiply in the coming days and exceed past surge levels, according to the OCTA Research Group from the University of the Philippines.

“It’s better that they stay at home because it’s still not safe for them to go out, especially in crowded places,” Ms. Ente said before the latest government lockdown announcement. “There are a lot of ways for them to explore things. They can go online shopping, play online games and interact using social media.”

Only one of her five kids — her 15-year-old son — has been vaccinated against the coronavirus. Her 11-year-old twins and daughters aged five and six have not been vaccinated.

The Philippine Food and Drug Administration (FDA) has given the go signal to vaccinate children aged 5 to 11 using the vaccine made by Pfizer, Inc., taking its cue from the US, Canada and European countries.

“The increased vaccination of younger children five to 11 years old by early 2022 would be a step in the right direction,” Michael L. Ricafort, chief economist at Rizal Commercial Banking Corp., said in a Viber message. He said spending for children is a key factor in boosting consumer expenditures.

The Pfizer vaccine is said to have an efficacy rate of more than 90% for children, although they will be getting a lower dose. The government has said it would buy the Pfizer vaccines by this month.

Taguig City, Pateros, and Manila have called on parents to pre-register for the COVID-19 vaccination of kids aged 5 to 11.

“I’m willing to have my kids vaccinated as soon as possible, but maybe I’ll wait first and see if the vaccination of other kids would be okay,” Ms. Ente said. “I trust the Health department and the government.”

Over at SM City Molino in Cavite province, families opt to visit at the weekends, going shopping and bonding usually after lunch until 7 p.m.

“The parents are annoying,” he said. “It’s not the kids that are the problem, it’s the parents,” he said in Filipino, stopping to reprimand a parent going to the indoor amusement center without logging details with security.

At Toy Kingdom’s pop-up shop, sales demo worker Maureen Anne Historia Cabral said the store have started selling as much as P20,000 worth of toys after kids were allowed to visit malls again. Before, the pop-up shop only sold half.

“Children would ask their parents to buy Barbie dolls, Nerf guns, yoyos and bubbles,” she said in Filipino. Each family would spend as much as P1,000 per visit.

Dean Kier L. Menodiado, a sales clerk for kids’ apparel at the SM department store, said sales have increased since parents were allowed to bring their children with them because getting the right sizes have become easier.

“They would get two items each and they will spend P500 to P600 in total,” he said in Filipino. Clothes are put inside a container for sanitation after a customer tries them on, he said.

Meanwhile, Character Shop supervisor Benet M. Guanlao said they have hit their sales target for every brand at the accessory corner, where kids would often buy Disney’s Frozen merchandise, cars and superhero items.

“We barely sold anything before the kids were allowed inside malls,” he said in Filipino.

That might happen again as Omicron spurs another infection surge. The coronavirus variant dampened New Year festivities around the world, with Paris canceling its fireworks show, London relegating its own to television and New York City scaling down its famous ball drop celebration at Times Square.

Globally, airlines canceled more than 6,000 flights on Christmas Eve, Christmas and the day after Christmas as COVID-19 cases surged. In the United States, more than 1,200 flights were canceled and more than 5,000 were delayed on Dec. 26 alone as staff and crew called out sick.

“The Omicron variant surge in some countries around the world could slow down global economic recovery or growth amid restrictions on travel,” Mr. Ricafort said. Vaccination will be key to ease the effects, he added.

“Accelerated vaccination versus COVID-19 towards population and herd immunity could help better protect the local population against the more transmissible but less deadly Omicron variant,” he said.

Ms. Ente’s kids will have to wait before they can go out again.

“I used to tell them that kids were just allowed to go out because it’s the holiday season, but children will no longer be allowed after Christmas and the New Year,” she said. “I would tell them that they are doing their part in helping end the pandemic. If we don’t have to do anything outside, we will not go out.”