THE RANKS of unemployed Filipinos increased in April, when the government tightened lockdown restrictions in Metro Manila and nearby provinces to curb a surge in coronavirus disease 2019 (COVID-19) cases, data released by the Philippine Statistics Authority (PSA) showed.

Preliminary results of the PSA’s April 2021 round of the Labor Force Survey showed an unemployment rate of 8.7%, inching up from 7.1% in March.

Metro Manila, Cavite, Laguna and Rizal were placed under an enhanced community quarantine from March 29 to April 11 as the government tried to slow the surge in COVID-19 cases that were overwhelming hospitals. This was later relaxed to a more lenient modified enhanced quarantine from April 12 to 30. 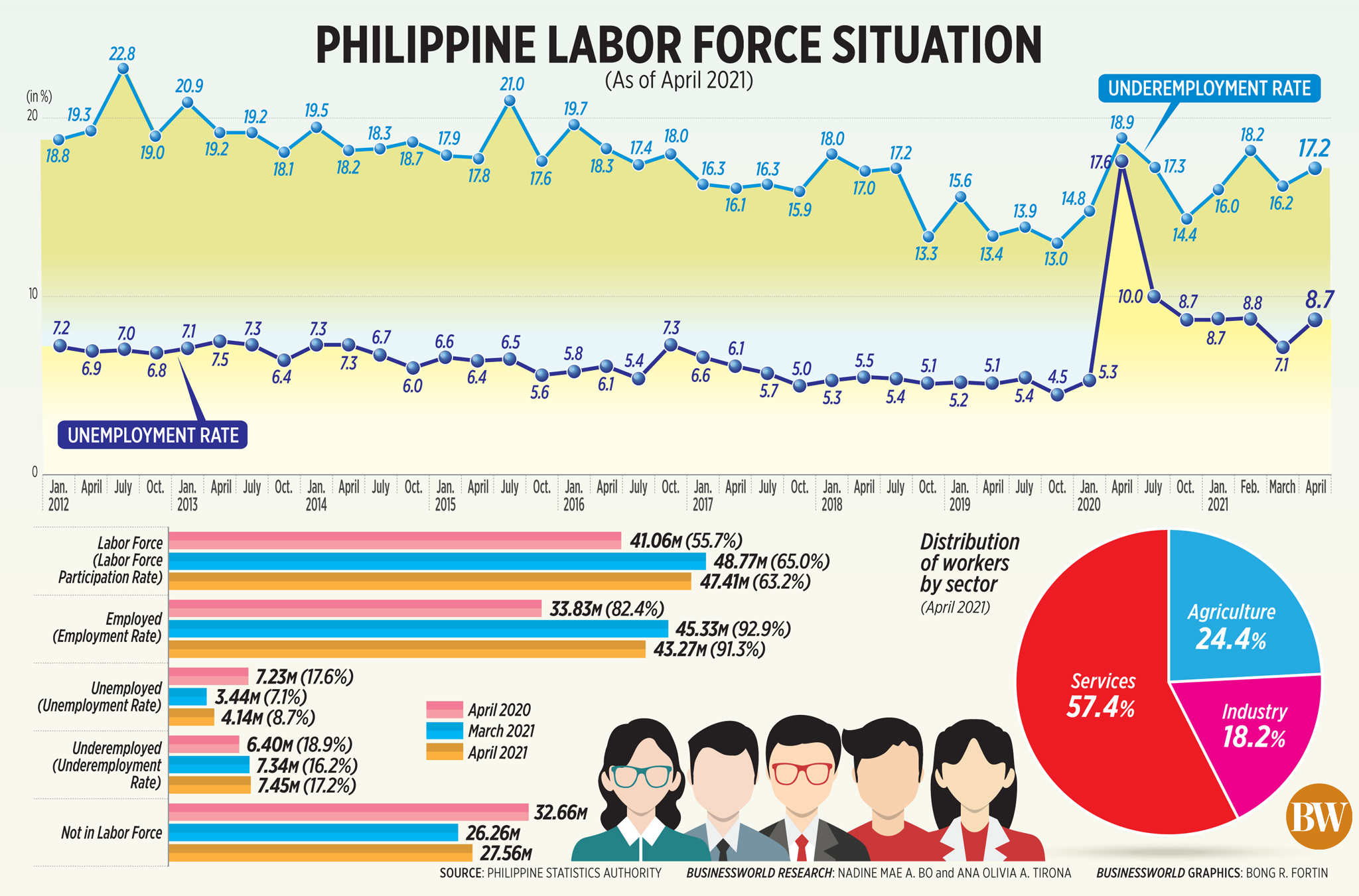 The April unemployment rate was still lower than 17.6% in April 2020 — at the height of the strictest form of lockdown in Luzon at the onset of the pandemic.

The underemployment rate — the proportion of those already working but still looking for more work or longer working hours — worsened to 17.2% in April from 16.2% in March. This translated to 7.453 million underemployed Filipinos, more than 7.335 million in the previous month.

The latest figure was lower than April 2020’s 18.9% underemployment rate, though there were fewer underemployed Filipinos (6.398 million) because many had left the labor force that time.

In a joint statement, Socioeconomic Planning Secretary Karl Kendrick T. Chua, Finance Secretary Carlos G. Dominguez III and Budget Secretary Wendel E. Avisado noted that while the results in April were “substantially better” than last year, there was “temporary reversal” of the gains made in the previous months due to the lockdowns.

The economic managers said unemployment rates in the National Capital Region and Calabarzon (Cavite, Laguna, Batangas, Rizal, and Quezon) regions, where the strictest quarantines were imposed, were the highest in April at 14.4% and 13.4%, respectively.

“Meanwhile, the unemployment rate outside NCR continued its general downward trend, declining from 8.7% in January 2021 to 7.9% in April 2021. This reflects the gains from the safe reopening of the economy in the provinces,” they said.

They also noted that total employment in April remained above pre-pandemic levels: “While the economy lost 8.7 million jobs at the height of the quarantines last April 2020, the economy generated 9.4 million jobs or a net of 0.7 million jobs between April 2020 and April 2021. Improving the rate of job creation will be crucial in our recovery effort this year,” they added.

The employment rate — the proportion of the employed to the total labor force — stood at 91.3% in April, down from 92.9% in March. This was equivalent to 43.269 million Filipinos in April compared with 45.332 million in the previous month.

Between April 2020 and April 2021, services saw the most jobs generated on a net basis at about 5.509 million, followed by industry’s 2.131 million and agriculture’s 1.799 million. Among subsectors, wholesale and retail trade led with 3.391 million net jobs created followed by agriculture and forestry (1.55 million) and construction (1.346 million).

“Moving forward, the main challenge to economic authorities will be to restore business confidence on the back of gradual reopenings that should result in more persons joining the labor force. With the recent decision by authorities to start the ‘phased implementation’ of the vaccination of workers in essential industries (A4 sector), a turnaround in confidence is possible soon and should lead to better employment numbers and contribute to the pace of the economic recovery beginning in the second half of this year,” Mr. Roces said.

In a separate e-mail, Asian Institute of Management economist John Paolo R. Rivera said normalization would only happen once herd immunity is achieved and the economy is fully opened.

“The employment figures so far, given measures to contain the pandemic, can be an indication that we still cannot expect significant improvements in GDP (gross domestic product) growth figures. Steep growth rates are constrained by the ‘opening-lockdown-opening’ approach because momentum is not sustained,” he said.

“There might be a need to channel resources in enabling enterprises to stay afloat and allowing consumers to sustain consumption through assistance or amelioration programs. It cannot be a one-time-big-time provision. It has to be strategically and systematically done,” he added. — Lourdes O. Pilar with inputs from Beatrice M. Laforga