MANUFACTURING ACTIVITY in the Philippines declined at a softer pace in May, as new orders and production improved amid the easing of lockdown restrictions in the Philippine capital and nearby provinces, a survey by IHS Markit showed on Tuesday.

The Philippine Manufacturing Purchasing Managers’ Index (PMI) stood at 49.9 in May, a slight improvement from April’s 49 but still below the 50 neutral mark that separates expansion from contraction, IHS Markit said in a report.

This signaled a “softer downturn across the Philippines manufacturing sector, as operating conditions inched towards stabilization,” it said. 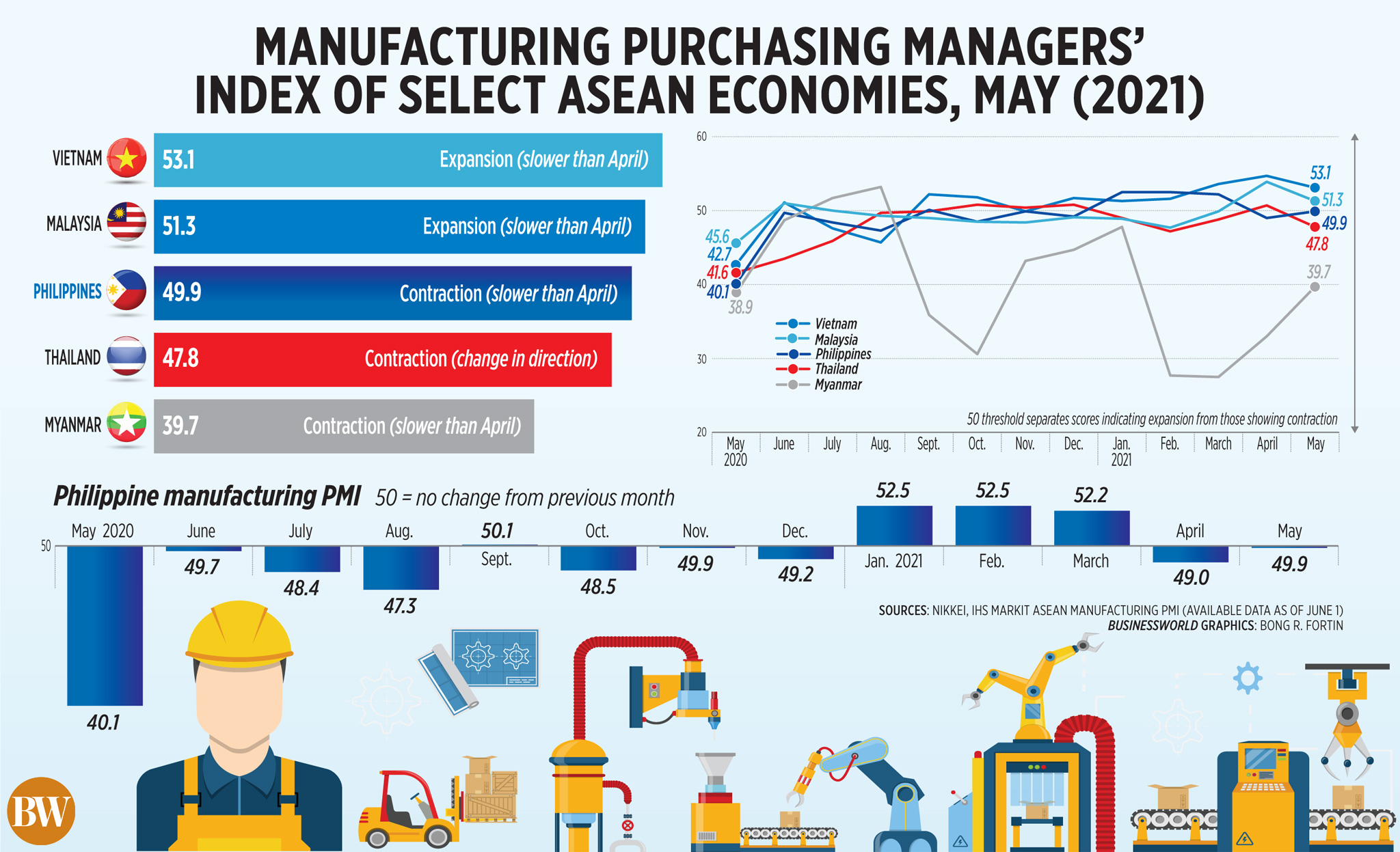 The May PMI reading matched that of November last year.

“A surge in COVID-19 (coronavirus disease 2019) cases and ECQ (enhanced community quarantine) measures last (April) forced the Filipino economy back into contraction territory. May PMI data will therefore be welcomed as it revealed a swift movement towards stabilization with some businesses already resuming their operations. Softer declines in output and new orders signaled a step in the right direction, whilst a renewed increase in overseas demand also supported the sector,” Shreeya Patel, economist at IHS Markit said.

Coronavirus infections surged in March, prompting the return to strict lockdowns in Metro Manila and adjacent provinces. Restrictions have been eased starting May 15 after new cases drastically declined.

The Health department reported 5,177 new coronavirus cases on Tuesday, bringing the total number of active infections in the country to 53,203.

In May, the Philippine manufacturing PMI was the third highest among five Southeast Asian economies, Malaysia’s 51.3 and Vietnam’s 53.1.

Like the Philippines, the PMI of Thailand (47.8) and Myanmar (39.7) also remained in contraction territory in May.

In the Philippines, the total volume of production continued to drop and the supply of materials remained tight in May. However, the rate of decline was slower than April as more factories were able to resume operations and reduce backlog.

New orders continued to fall in May, but only marginally compared with the previous month, buoyed by the high orders from overseas markets after more economies reopened.

“Despite this, outstanding business was reduced at a solid rate, with the latest contraction the sharpest in five months. Anecdotal evidence suggested the reopening of some businesses allowed firms to keep up with demand,” IHS Markit said.

Quarantine restrictions continued to disrupt supply chains, with longer lead times that month were seen to be one of the highest in over five years. Delivery of inputs were delayed largely due to shortage in raw materials and transportation bottlenecks according to companies surveyed by IHS Markit.

Local manufacturers also increased their inventories in May to post five straight months of expansion, as they prepared for an expected surge in demand over the coming months. Production stocks remained stable during the month.

Despite addressing these challenges, IHS Markit said short supply and disruptions still pushed input price inflation up. The rate of increase eased from April but remained above the long-run series average.

This prompted companies to pass on part of the higher raw material costs to customers by increasing prices to the greatest extent since November 2018.

IHS Markit said firms were optimistic on their output expectations in the next 12 months, as they hoped the ongoing vaccination program will help the country go back to normal by May 2022.

“Nevertheless, policy makers are working towards securing enough vaccines to inoculate a large proportion of the population. The rollout must gain momentum to prevent another tightening of measures and to encourage an economic recovery, however,” Ms. Patel said.

IHS Markit said the level of confidence among respondents remained below the series’ average since many companies are cautious over the long-term fallout from the coronavirus pandemic.

“Much uncertainties remain in this pandemic, but with the recent shift to looser curbs and inventory buildup, expect the index to hover slightly at expansion in the months ahead, with production volume likely supported by rebounding demand especially from overseas. However, soft local demand might dampen the potential for further expansion readings,” Mr. Roces said via Viber on Tuesday.

“Going forward, risk of lockdowns in an effort to help reduce new COVID-19 local cases that have been relatively higher on a daily basis recently could result to slower recovery in production, sales, net income, jobs, and other economic activities, especially for hard-hit sectors,” Mr. Ricafort said in a note.

SUPPLY SQUEEZE
Meanwhile, Asia’s factory activity continued to expand in May thanks to an ongoing recovery in global demand, surveys showed on Tuesday, though rising raw material costs and supply chain constraints clouded the outlook.

A spike in COVID-19 infections in some countries could disrupt supply chains, posing a headache for manufacturers and weighing on Asia’s export-driven recovery, analysts say.

Japan and South Korea saw expansions in factory activity moderate in May, purchasing managers’ indexes showed on Tuesday, underscoring the fragile nature of their recoveries.

“A spread of new variants is already having a negative impact on supply chains. If this situation persists, it would hit Asian manufacturers that had been scrambling to diversify supply chains out of China,” said Toru Nishihama, chief economist at Dai-ichi Life Research Institute.

“Asia’s recovery has been driven more by external than domestic demand. If companies have trouble exporting enough goods, that bodes ill for the region’s economies,” he said.

China’s factory activity expanded at the fastest pace this year in May on solid demand at home and overseas, though sharp rises in input prices and strains in supply chains crimped some firms’ production, a survey showed on Tuesday.

The Caixin/Markit Manufacturing PMI, which focuses on smaller firms, rose to 52.0 last month, the highest since December and inching up from April’s 51.9.

The survey followed China’s official PMI on Monday, which showed factory activity in the world’s second-largest economy slowed slightly in May on surging raw material costs.

The effects of surging infections on manufacturing were most prominent in India where factory activity growth hit its lowest in 10 months, the PMI for the country showed.

India’s coronavirus outbreak has infected 28 million, killed more than 300,000 and forced many states to impose restrictions on economic activity.

Factories in Taiwan and Vietnam were so far holding up despite rising infections. Taiwan’s PMI stood at 62.0 in May, slowing from April but remaining well above the 50 mark that separates growth from contraction.

Japan’s au Jibun Bank PMI dropped to a seasonally adjusted 53.0 in May from 53.6 in the previous month, but was higher than its flash reading of 52.5.

Separate data released on Tuesday showed Japanese companies cut spending on plant and equipment for the fourth consecutive quarter in January-March, as the economy struggles to shake off the drag from the coronavirus pandemic.

South Korea’s PMI stood at 53.7 in May, slowing from April but extending growth into an eighth straight month although the pace of input price increases hit a 13-year high, the index showed.

The recovery in Asia’s fourth-largest economy remains robust with South Korean exports logging their sharpest expansion in 32 years in May, fueled by stronger consumer demand globally as many economies start to reopen. — Beatrice M. Laforga and Reuters