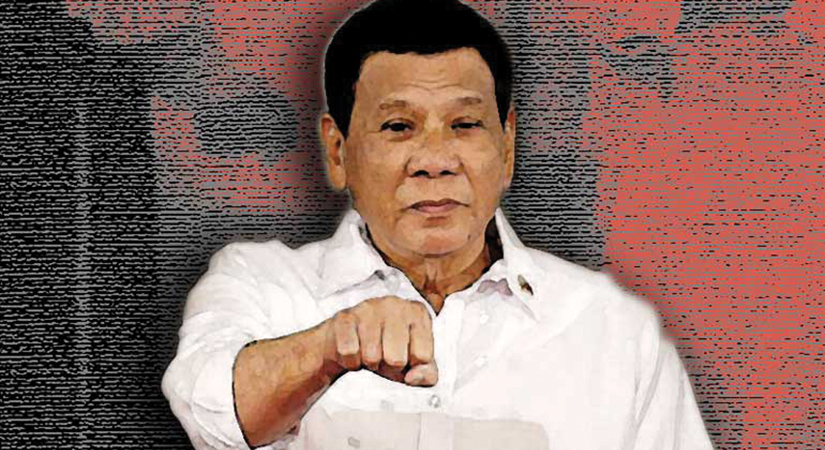 They called him The Punisher when he was mayor of Davao City. I guess he can now be called The Terminator (step aside Schwarzenegger).

President Rodrigo Duterte appears to be in a terminating mood of late. He just ordered the termination of the Visiting Forces Agreement (VFA) with the United States and is set to allow the termination of the existence of the ABS-CBN network, the media bulwark of the Lopez business empire, operating television and radio stations across the Philippines and overseas.

Duterte does not have to actually cut off the network’s operations, as in unplugging a dying person’s life support system or discontinuing an international agreement like the VFA. He will simply order his rubber-stamp Congress not renew or extend the network’s franchise.

Power. That’s what Duterte wants to show to anyone who dares to displease him. Of course, his lieutenants (like Solicitor General Jose Caleda) will apply legal goobledygook to justify Duterte’s display of power. That’s like sheathing a brass knuckled fist with kid gloves.

There’s a wise saying: “He who fights and runs away lives to fight another day.”

One doesn’t have to be a monster for Duterte to decide to make you kneel in obeisance. The VFA was terminated because of the cancellation of the 10-year visitor’s visa to the US of Senator Ronald “Bato” de la Rosa, Duterte’s former chief of the Philippine National Police and principal enforcer of Duterte’s war against drugs.

Duterte actually gave the US one month to reinstate the visa… or else. Expectedly the US was not impressed with the threat. The Americans ignored it. In fact, President Donald Trump’s reaction was that this would save money for the US. And so, the VFA was terminated.

And speaking of Trump, Duterte is not the only head of state who has demonstrated a willingness to give more importance to the interests of cohorts than the greater good of the country. If Duterte has Bato, Trump has Roger Stone — which has caused pundits to comment that both Duterte and Trump have left their respective countries caught between a rock and a hard place.

Note that the VFA is linked to many other military and economic ties between the United States and the Philippines. It’s like a string that is tied to a rope that is tied to a bigger rope that is tied to a package of benefits that could be lost. This loss will have a profound impact on the Filipino people and is infinitely more important than a vacation by Bato in the US (he has been seen in Las Vegas lifting Manny Pacquiao on his shoulders after a fight). But that hasn’t dissuaded Duterte from his power trip.

And why should that dissuade him? ABS-CBN, the business moguls, and the United States are chicken feed compared to what Duterte has also decided to take on. God Himself.

Some time last year, following profundities hurled at His Holiness Pope Francis, Duterte got pissed over the imperfections God has allowed in man (including Duterte’s imperfections, one may assume). As a result he called God stupid (that should give the Ayalas, Pangilinan and the Lopezes some comfort, knowing that they are in Divine company).

Not satisfied with insulting God, Duterte has predicted that the Catholic church will be kaput in 25 years.

Why 25 years and not sooner? I guess Duterte acknowledges the difficulty of bringing an institution of over 2,000 years to its knees, so he set a less abrupt timeline of a quarter century (Duterte is only giving ABS-CBN only up to the end of March plus a grace period to continue its existence).

This has led some social media trolls to wonder if the Catholic church also depends on a government franchise to continue to operate in the Philippines. If that were the case, you can be sure that the Almighty and All-Powerful Duterte would also threaten to allow the franchise to lapse and refuse to renew it.

Note that Duterte has a sense of history. He never had much love for America, because, according to him, US troops had massacred Mindanao natives way back during its colonization of the Philippines. That, on top of being denied a tourist visa when he wanted to visit a girlfriend in the US (this may simply be gossip, of course).

Thus, when then US President Obama expressed concern over the reported bloodbath that characterized Duterte’s war on drugs, Duterte reminded Obama of the spillage of Filipino blood caused by America.

The Catholic church has also been critical of Duterte’s anti-drug war, condemning the reported extrajudicial killings. Pissed at this “interference,” Duterte has called the princes of the church hypocrites for having looked the other way while priests abused young parishioners. Duterte has even threatened to “kill” the abusive priests.

Not surprisingly, Duterte does not have much love for the Catholic church. That, on top of being allegedly molested by a priest himself (this may also be gossip, of course, although Duterte himself has claimed that it actually happened).

In a predominantly Catholic country like the Philippines, Duterte’s threats have gone in one ear and out the other of millions of “devout” Catholics, thus encouraging Duterte to continue his insults against the church and even against the Lord. Of course God doesn’t need anyone to defend Him, but shouldn’t there be at least an uproar from the Catholic faithful over Duterte’s foul language?

One is constrained to observe that Duterte wouldn’t dare use the same foul language against Islam. If he does, he would immediately be the object of a fatwa or a death sentence. This says something about the alleged tapang or bravery of Duterte.

At any rate, it should also be noted that Catholics have been taught to turn the other cheek and to suffer insults in silence. Thus, blusterers like Duterte have felt free to throw their weight around.

You can be sure that Duterte has also not forgotten the centuries of Spanish domination of the archipelago and the sword and the cross that were used in the introduction of Christianity and the establishment of the Catholic church in the Philippines.

Indeed, Duterte has such contempt for the Catholic church that one should not be surprised if he rakes up the conquest of the Philippines by the Spaniards and how Ferdinand Magellan was slain in Mactan by a Cebuano chieftain named Lapu-Lapu.

If it took someone named Lapu-Lapu to fight the Spaniards, Duterte would have no compunction about giving the bishops and the priests his dirty finger, along with the greeting, “Fish be with you.”