Last week I attended two energy fora where some important data and issues were discussed. First the “Market Operations 2019,” a media briefing by the Independent Electricity Market Operator of the Philippines (IEMOP), on Jan. 30 at the trading floor of the Wholesale Electricity Spot Market (WESM). Second, the Keynote Speech of Senator Sherwin Gatchalian, Chairman of the Senate Committee on Energy, at the “Forum on Competition in Developing Countries” on Jan. 31 at Sofitel Philippine Plaza, sponsored by the Philippine Competition Commission (PCC).

During the IEMOP briefing, an important chart was shown where power undersupply relative to rising power demand in April-July 2019 resulted in high generation prices expressed as Effective Spot Settlement Price (ESSP) in WESM of P5 to P6+ per kWh, vs average prices of P2-P4/kWh in non-peak demand months.

See that the rising average ESSP from 2016 to 2019 in the Luzon-Visayas grids as both annual electricity consumption and system peak demand keep rising. I added here data from the Department of Energy (DOE) on dependable capacity (see Table 1). The bottom line — insufficient supply when demand is high and rising would lead to both higher prices and frequent “yellow-red” alerts by the National Grid Corp. of the Philippines (NGCP).

At Mr. Gatchalian’s presentation, he focused on “limited competition” by the few big domestic players, and that retail electricity suppliers (RES) and distribution utilities (DUs) are supposed to compete with each other by offering more affordable rates but does not happen in some cases. I summarized his three charts here (see Table 2).

Other competition issues during the good and cool PCC conference, I will discuss in the next few weeks.

Now, three points to clarify in Mr. Gatchalian’s claim of limited competition from the “big five.”

One, prices spike mainly because of power undersupply thanks to old, ageing baseload plants that go on unscheduled or extended shutdowns and no new peaking plants to provide the sudden big supply gap. This was very clear in March-July 2019, five months of occasional, sometimes daily, “yellow-red” alerts by NGCP.

Two, DUs are already highly regulated by the Energy Regulatory Commission (ERC), the Department of Energy, and even Congress because they need a Congressional franchise to operate. RES are less regulated but Retail Competition and Open Access provision of the Electric Power Industry Reform Act of 2001 — better known as the EPIRA law — remains suspended by the Supreme Court for three years now.

Three, the Philippines’ “big” power companies are actually medium-sized, even small, when compared with energy companies in the region. See the total power generation in terawatt-hours (TWH) of the Philippines in 2018, which was only 47% to 59% of our neighbors Malaysia, Thailand, and Vietnam. I include here portions of Platts’ 250 biggest energy companies in the world, I did not include largely oil-gas producers and manufacturers (see Table 3). 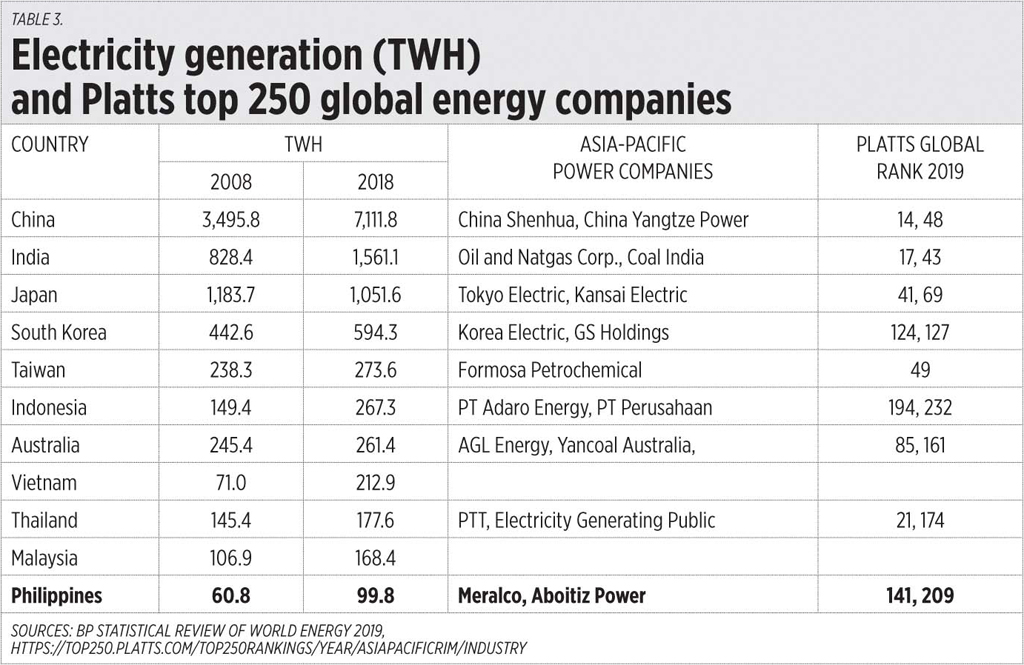 We need to significantly expand our power generation capacity, from conventional, stable, reliable, and dispatchable power sources, baseload to peaking plants. To do that, government, especially the ERC, should step back from too much regulation especially in pricing.

Finally, bottlenecks from the biggest power monopoly in the country, the NGCP, should be relaxed so that more power plants, baseload to peaking plants, will be positioned near the high demand cities and provinces.