Home Editors' Picks In RTL, economists have had their economic ‘laboratory’

Economists had rejoiced in the passage of the rice tariffication law (RTL) in 2019. To them that reform was long overdue. Their arguments may be summed up by the following data-supported adverse effects of the rice import restrictions implemented through a rice import monopoly of the National Food Authority (NFA).

One, despite the protection accorded to farmers, rice productivity is low resulting in rice farmers being among the poorest of the poor in our country. Two, the policy raises rice and food prices to the detriment of consumers, the majority of whom are poor. Three, the operations of the NFA had caused a massive corporate deficit to be paid by taxpayers with rice insecurity due to its inefficiency. Four, the past policy, which RTL corrected, had spawned corruption in rice trading, in government-to-government import rice transactions, and in the allocation of the minimum access volumes where rice cooperatives were identified as fronting for rich financiers. Lastly, the whole policy regime supposedly designed to attain rice self-sufficiency had come at the expense of other agricultural industries with high comparative advantage.

Picking up data from a study by Adriano et al., entitled “Philippine Rice Tariffication Law — A Midterm Review: Challenges and Opportunities,” rice productivity has averaged at 1.4% from 2009 to 2018 which was “not even enough to meet the consumption requirements of the growing population of the Philippines, which registered an annual growth rate of 1.6%.” Filipinos pay more for rice than the Vietnamese and Myanmar rice consumers. About two-thirds of the Department of Agriculture (DA) budget went to rice at the expense of other agricultural industries like coconuts.

If it was not passed in 2019, RTL was still bound to happen from the perspective of managing the fiscal deficit. There are other benefits of RTL which economists claim, but the most compelling is to arrest the fiscal deficit. NFA’s corporate debt had reached P170 billion at its peak and without the RTL, had the potential of surpassing that of the National Power Corporation which triggered the EPIRA law. Like in power, the country was bleeding fiscal resources without the attendant benefits the expenditure was supposed to buy.

Yet, the opposition to RTL refuses to concede and move forward with the liberalized policy on rice imports. With the change in government looming on the horizon, the anti-RTL camp hopes to reverse the 2019 reform. Let me point out their main arguments for advocating so.

From the key arguments of Raul Montemayor in his article entitled “Rice Traders Liberated (RTL): Winners and Losers from the Rice Tariffication Law,” the rice farmers have suffered the most from RTL at about P40 billion in the first year of RTL as compared to a normal reference period from March 2017 to February 2018. Two, the gains of rice consumers amounted to only P232 million. Three, importers and traders scooped up much larger benefits from RTL. Importers gained a windfall gross profit amounting to P14.2 billion ostensibly from technical smuggling of rice, while traders decided not to pass to consumers all the benefits of RTL resulting in them pocketing about P43.3 billion.

Both analyses agree on one important finding — that the farmers lost in RTL, and that is expected since RTL reduced the trade protection of rice farmers. Economists, including me, however have argued that most rice farmers are rice consumers on more days of the year. Rice trade liberalization reduces the prices that consumers pay for rice, and thus rice farmers benefit from it as well.

However, if we take the computation of Raul Montemayor as correct, the loss of rice farmers far outweighed the gains of rice consumers. Adriano et al. echoed that in the first year of implementation of RTL “the average y-o-y decline in farm gate prices was -15.5% while the average decrease in the wholesale and retail prices of regular milled rice are -8% and -5.2%, respectively.”

Let us hang on to this common finding that farmers lost heavily in RTL compared to rice consumers in 2019, the first year of implementation of RTL. At this point, the public discourse on the matter suggests for us to look at the data and how the observed loss of farmers relative to the gain of consumers changed in the second year and third years.

Adriano et al. found out that in the second year the pattern had changed. Their analyses indicate that “from 2020 to 2021, wholesale and retail prices of rice had steeper y-o-y decline vis-à-vis the farm gate price.” Wholesale and retail prices of rice fell by 3.7% and 4.2% in 2020, respectively, from their 2019 levels. In contrast, farm gate prices of palay (unhusked rice) for the same period contracted by only 1.1%.

The change of price movements appears to be sustained in 2021 or the third year of implementation of RTL as the Table shows. 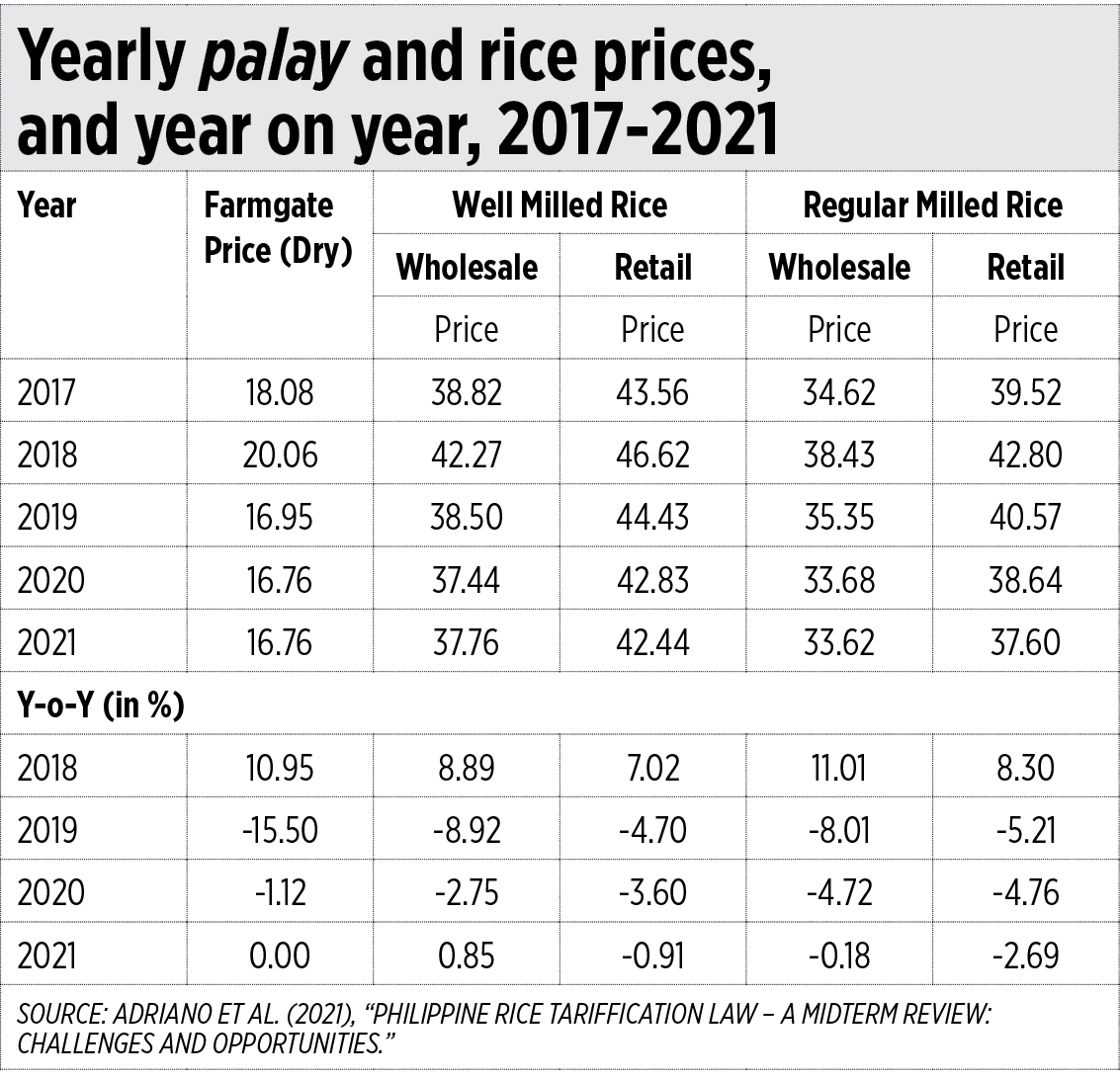 It is encouraging. As trade liberalization takes root, there is even more benefit to rice consumers and this time not at the expense of rice farmers. After their initial significant drop, which is expected because trade liberalization is supposed to reduce rice prices, palay prices stabilized. The implication of it is that consumers are now gaining more than farmers are losing, and if farmers are rice consumers in most of the year, this implies that the expected benefits of trade liberalization are showing as economists have claimed. Accordingly, the disincentive to growing rice is weakened, and rice production settles at its expected levels at lower valuation but nonetheless expanding because of rising demand.

But trade liberalization appears shunned by many of us. When the subject of RTL is brought up, I bet the average Filipino would ask “Is that necessary if rice farmers will have a decline in farm income?”

In the past three years of RTL, economists have had their “economic laboratory” with regards to rice trade liberalization as natural scientists have when they verify their propositions. The disadvantage of economic analyses is that their “laboratory experiments” take much longer to complete compared to natural science. In the case of RTL, they needed three years before they were able to validate their claims. Within the period of validation, economic propositions are vulnerable to the alternative claim that RTL is bad for our country like the one peddled by those who are opposed to trade liberalization.

The problem stems from economic science itself: economic analysis ignores time. I may be exaggerating this feature so much that my fellow economists may want to criticize me on this one. But hear me out on this observation. When we argue that RTL is beneficial to society, we dismiss answering the question of “when” the beneficial effect of trade liberalization is going to take root because we do not know when. However, economists are confident that the net gains to society would be positive after everything had settled down to the next economic equilibrium.

Let me track what happened to the rice supply chain after RTL was implemented. The RTL initially failed to promote competition as expected. Wholesale prices fell by less than the observed decline of import tariff rate on rice. Retail prices, which should move pari pasu with wholesale prices, and farm-gate prices, whose changes correlated more with those of wholesale prices, plunged more than wholesale prices.

The few who already know the rice import business imported as much as their business capacity could absorb, but they faced increasing costs from importing more. They needed to scale up their capital to bring in some more rice. On the other hand, while legally enabled to import, potential importers still had to learn the business and failed to give competition to existing rice importers and traders. The resulting price margin could not be competed away.

It may be said that RTL left behind a marketing system dominated by a few traders, without the effective import competition that it statutorily enabled due to possible entry costs of new importers. But instead of reversing to pre-RTL market policies for rice, the government may choose to facilitate import competition. Facilitating competition may be regarded as an integral part of opening local markets to import competition in order to promote the public interest.

Philippine Competition Commission Chairman, Dr. Arsenio Balisacan stresses that an open trade policy is important to effectively restrain any abuse of market dominance in such concentrated markets. In support of that, facilitating the entry of firms in the import business following the statutory lifting of import restrictions is important to make import competition more effective.1

However, promoting more competition would drive farm-gate prices even lower, and this leaves a bad taste about trade liberalization to many of us. That may not necessarily happen if trading and milling costs can be reduced. The observed deeper penalty on palay farmers following the RTL — that is, they lost trade protection relative to the percentage loss of traders — may be traced to the inefficiencies in the supply chain. This result ties up with a similar finding by Jandoc and Roumasset (2018) who documented that only about a fourth of the trade protection margin of retail rice prices went to rice farmers.2 The residual was appropriated by traders and millers either as excess profits or to pay for marketing and milling inefficiencies (Dawe et al. 2008).3 Policy distortions such as market interventions of the NFA in the marketing sector, which displace private transportation, storage and handling, contribute to making the palay and rice intermediation sector less competitive and efficient (Roumasset 1999).

I go along with Raul Montemayor’s suggestion for a “more strategic and nuanced approach to liberalization.” I am sure all of us are in favor of increasing rice productivity, farm incomes, reduced poverty everywhere, and so on. RTL had taken the first step towards this goal, and we needed additional measures to lock in the benefits we all aspire for rather than go back to a past made up of low rice farm productivity, rural poverty, massive fiscal deficits, and corruption. My suggestion to Montemayor is look at market intermediation costs.

Ramon L. Clarete is a professor at the University of the Philippines School of Economics.

Price is no longer an obstacle to clean power