The Philippine Statistics Authority (PSA) released the updated monthly vital statistics last week, on Jan. 6, and many numbers are interesting or shocking.

Two, there were fewer marriages in 2020 due to the strict lockdown. On average there were 40,000 marriages/month in 2019, then there was a drastic decline to only 20,065 in 2020, with the biggest decline in April-May 2020 with only 866 and 4,135 marriages, respectively. Economic and health/psychological stress must have also contributed to fewer babies for young married couples. 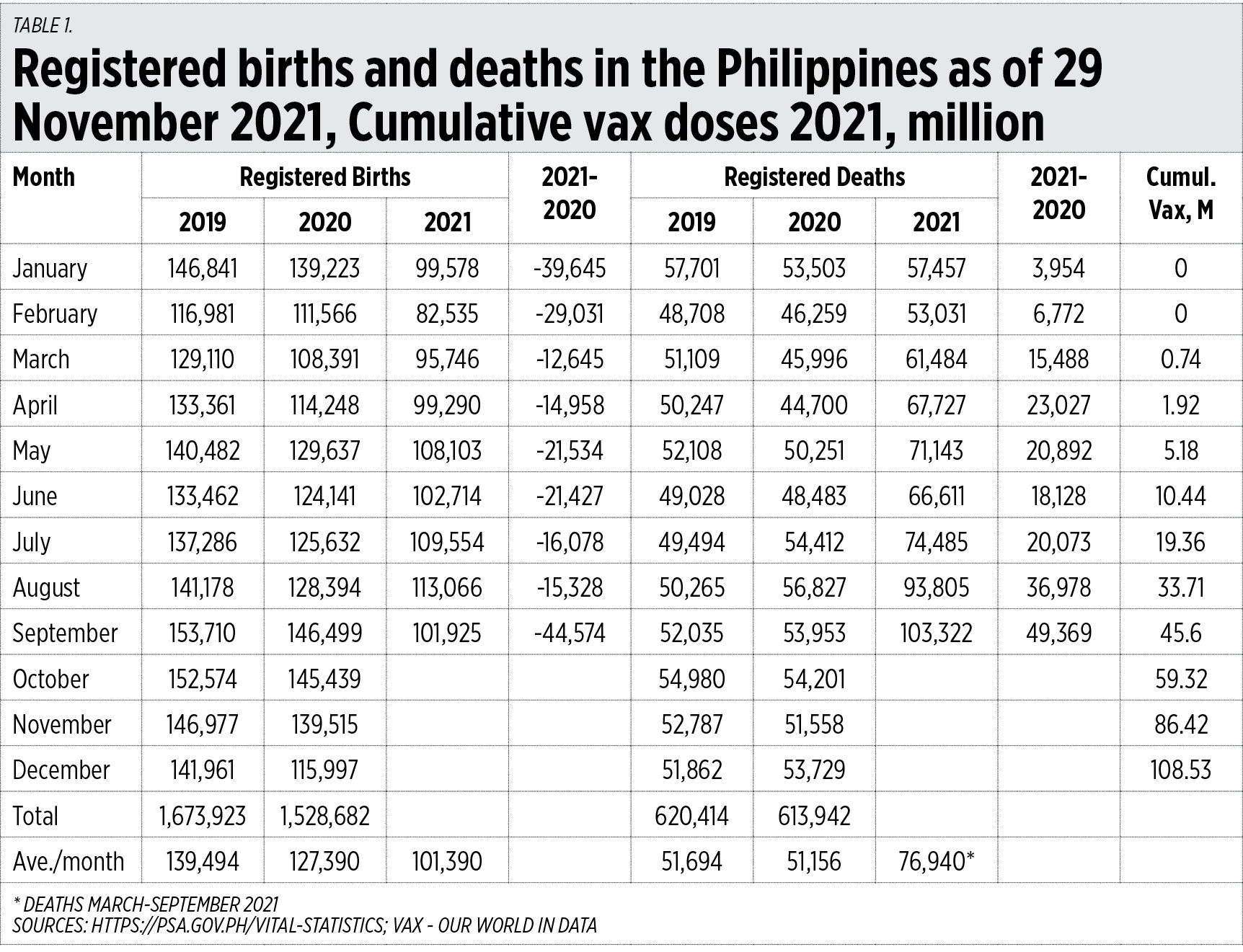 This is not COVID-related excess mortality because the total number of COVID deaths were only 5,559 in August 2021 and 4,846 in September.

The incumbent President of Concerned Doctors and Citizens of the Philippines (CDC Ph), Dr. Homer Lim, made this good observation: “The Philippine statistics on death and birth rates are quite alarming. Year 2021 was gloomy, excess deaths have topped 49,000 in September alone and we haven’t yet included the last quarter. What factors could have caused this sudden alarming surge in deaths? It is certainly not COVID deaths, so could this be due to people afraid of COVID that they have neglected their other illnesses, or could this be a reflection of vaccine related deaths?”

And the former CDC Ph President Dr. Benigno “Iggy” Agbayani, Jr. offered a good course of action: “These statistics on deaths and births have a huge implication on the longest, most expensive and tyrannical health protocols our country has ever tried. Unbridled lockdowns and experimental vaccinations are the most likely suspects in this sudden high deaths and low birth rates. An investigation by independent and credible experts on this life and death anomaly should be launched as soon as possible.”

Meanwhile, the Department of Budget and Management (DBM) released last week the General Appropriations Act (GAA) 2022 as signed by the President in December. I list below the big budget items and some new items there.

Two, in the Pension and Gratuity Fund (PGF) in 2022, I included the Miscellaneous Personnel Benefits Fund (MPBF). 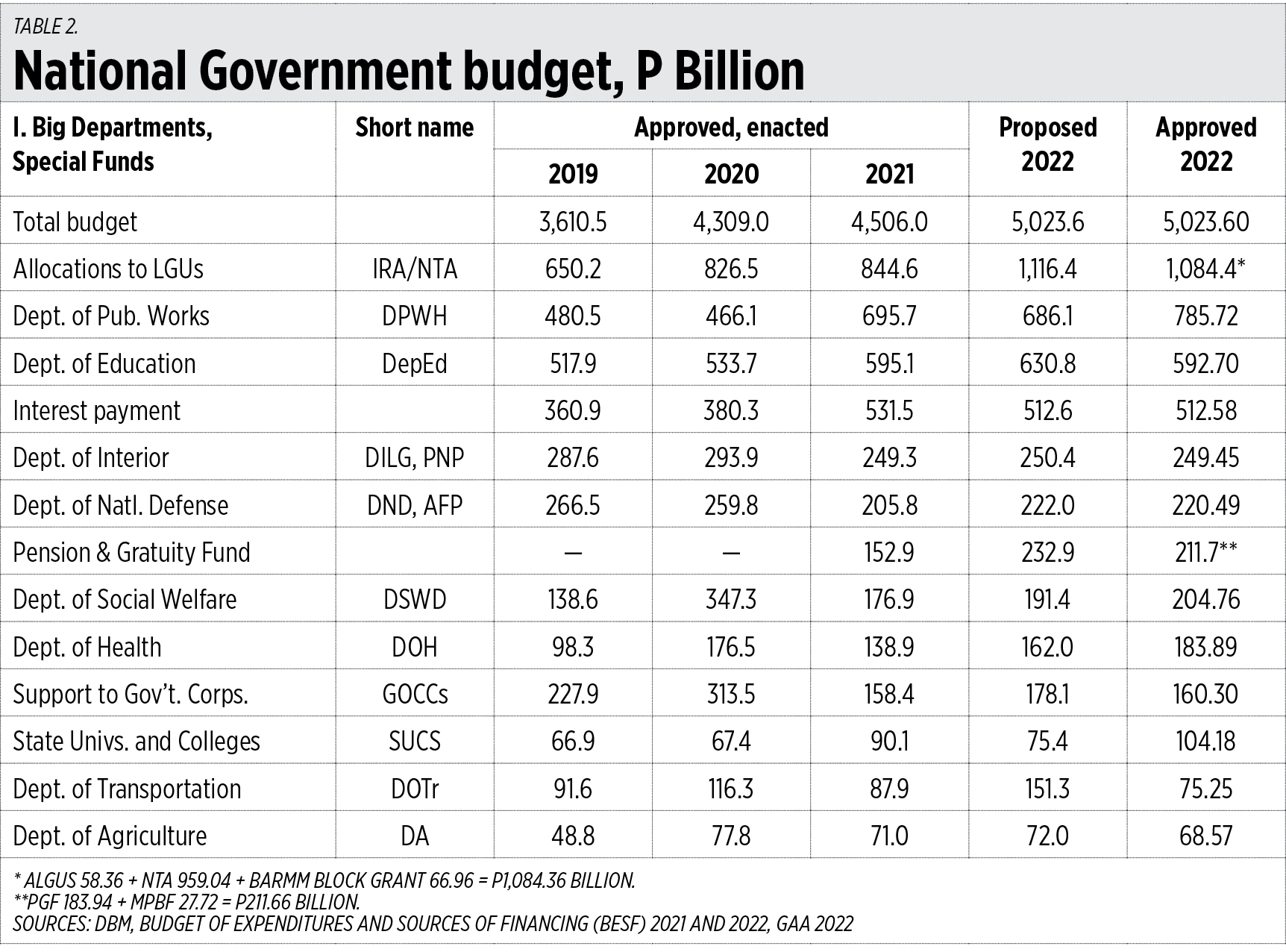 Philippine government spending on health is actually huge and more than double the Department of Health’s (DoH) budget. See here in GAA 2022:

– Compensation and other benefits for COVID workers in health facilities, P42 billion,

4.) Hospitals by other agencies, at least P10 billion:

So P183.89 billion + P85.86 billion + P120.25 billion + P10 billion (at least) = P400 billion. Not included here are health spending by: a.) government gambling corporations (Philippine Amusement and Gaming Corp., Philippine Charity Sweepstakes Office), b.) by other national agencies as they have their own medical and dental centers, and, c.) by LGUs as many of them have their own provincial hospitals, city hospitals, on top of their LGU health centers.

Now, the number of COVID cases are at an all-time high (28,700 on Jan. 9), the bulk of which are in Metro Manila, and Metropolitan Manila Development Authority (MMDA) Chairman Benjamin Abalos has declared that the vaccination rate in the National Capital Region as of Jan. 4 was already 106% of target population — this is additional proof that vaccines have little function to control infections and protect the public. People have to rely on natural immunity and stronger immune systems to protect them from severe symptoms.

The implicit forced vaccination orders issued by the Inter-Agency Task Force for the Management of Emerging Infectious Diseases under its Resolution 148, by the MMDA issued last week, and by many LGUs should stop. Not only for being unconstitutional but also for their questionable health impact.

The Rocker and the Prince