Metro Manila and surrounding provinces experienced rotating blackouts of one to two hours per area on June 1. It was bad to go back to candles, no aircon or electric fans on a hot afternoon, and it reminded people of the daily blackouts in the whole country in 1990-1991.

Here are the 10 indicators of blackout economics.

1. Frequent use of a price cap or price control. On May 31, this column’s piece “Net zero carbon emission and net zero growth,” noted that “Intervals with secondary price cap — none in March and April this year but in May there were 57 intervals. This is a prelude to blackouts actually. When prices spike too often, that means supply is not sufficient to meet demand.” And, indeed, the next day, there were actual rotating blackouts.

2. Very thin reserves in the days prior to the actual blackout. These reports in BusinessWorld give a snapshot of before and after the blackout of June 1:

3. Regulators are not regulating enough of the national transmission monopoly. Yesterday, fellow UP School of Economics alumnus Romeo Bernardo argued in his column “Red Alert and EPIRA,” here in BusinessWorld, “If we want to avoid the power shortages that we just experienced…. our regulators should focus on regulating the regulated business of transmission of power and consider simplifying the rules for gencos to allow the market to work, to de-risk the environment, and to attract more long-term private capital.”

4. Low electricity generation per capita for decades. Low generation means low supply and low reserves to deal with unscheduled power shutdowns and spikes in demand. The Electric Power Industry Reform Act (EPIRA) was enacted in 2001 and at that time, the Philippines had nearly 600 kWh/capita. After 18 years, in 2019, the Philippines had 986 kWh/capita and had been already overtaken by Vietnam, Indonesia, and India.

5. Continued demonization of cheap and stable energy for baseload generation despite already low levels. After endless pressure by the environmental activists, virtue-signaling corporations and government agencies “to save the planet,” the Department of Energy (DoE) last year ordered a halt in new coal power plant development. The Philippines’ 540 kWh/capita of coal generation in 2019 was only 1/11th of Australia’s, 1/10th of Taiwan’s, 1/9th of South Korea’s, 1/6th of China and the US’, 1/5th of Japan’s, a fourth of Malaysia’s and Germany’s, a third of Canada’s, and half of Vietnam’s (see Table 1). 7. Regions with excess power cannot easily send power to regions with power deficits due to transmission congestion. At the Senate Committee on Energy hearing last week, on June 10, DoE Secretary Alfonso Cusi said that there were 2,543 MW of excess power in the Visayas and Mindanao grids that could have augmented the deficiency in the Luzon grid but which could not be delivered.

8. Congestion due to long delays in transmission projects that prevent completed power plants from bringing power to end-users. On average, the National Grid Corporation of the Philippines (NGCP), the biggest private monopoly in the whole country, has three- to four-year project delays (see Table 2). 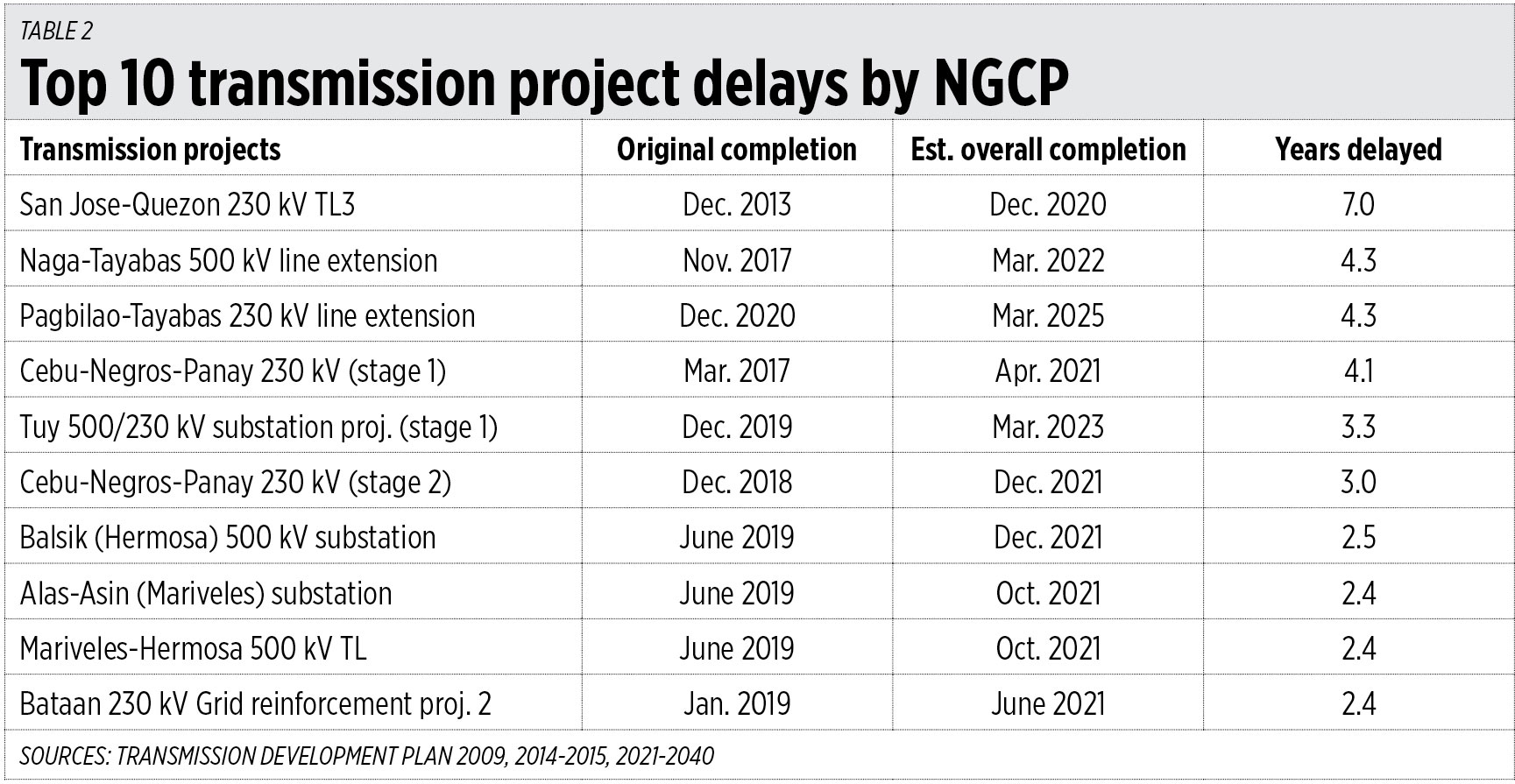 9. High demand for ancillary services (AS) but these are uncontracted. In the same Committee hearing, Secretary Cusi said the NGCP has a total uncontracted AS of 1,877 MW — a regulating reserve of 441 MW, a contingency reserve of 712 MW, and a dispatchable reserve of 724 MW. This is like a big hotel or mall that does not have a standby genset even if it knows that the power supply in the grid can be unstable.

10. Regulators are strict on the competitive generation sector but soft on and not strict with the monopoly transmission sector. Still at the same Senate hearing, Energy Regulatory Commission (ERC) Chairperson Agnes Devanadera said the ERC has created a task force to investigate the plants that had outages in April to May this year. Fine. But there was no explicit statement to investigate the NGCP on why it has not contracted enough AS, nor built enough transmission lines, nor doing the IPO requirement, among others.

The sound bites on an “energy transition” to decarbonize Philippine power are cute but impractical. Our priority should be power adequacy and affordability first and foremost. Many regulatory obstacles, many agency permits that prevent more power plants from being built (which, if built, would make the generation sector even more competitive) should be removed. And “decarbonize” is a confusing goal when the real goal is to avoid “power vaporized” and blackout economics.