After the yellow-red alerts and blackout in the Luzon grid in late May to early June caused by many big but old and ageing power plants going on extended maintenance shutdowns and derating, this month the issue has shifted back to amending the Electric Power Industry Reform Act (EPIRA) of 2001 and kill-coal narratives. See these two reports in BusinessWorld: “House bill seeks to allow gov’t to own power plants, halt hydro privatization” (July 5); and, “Climate advocate calls for ban of coal-fired plants to extend to pending projects” (July 11).

The first report is about amending the EPIRA law which mandated the government to get out of the power generation business, including the big hydro plants in Mindanao, and encourage more private power generation competition. That House Bill will amend the EPIRA for the worse, not for the better.

The second report is about the endless lobby by environmental groups to kill coal power in the Philippines, not just for new projects but even for existing ones, and push more renewables especially wind and solar.

To understand the impracticality of this lobby, see the global power generation picture from the BP Statistical Review of World Energy (SRWE) 2021 that was released last week. I chose the big power and electricity generation countries in the world plus the ASEAN-5, then I computed the percentage share of coal power and wind plus solar. 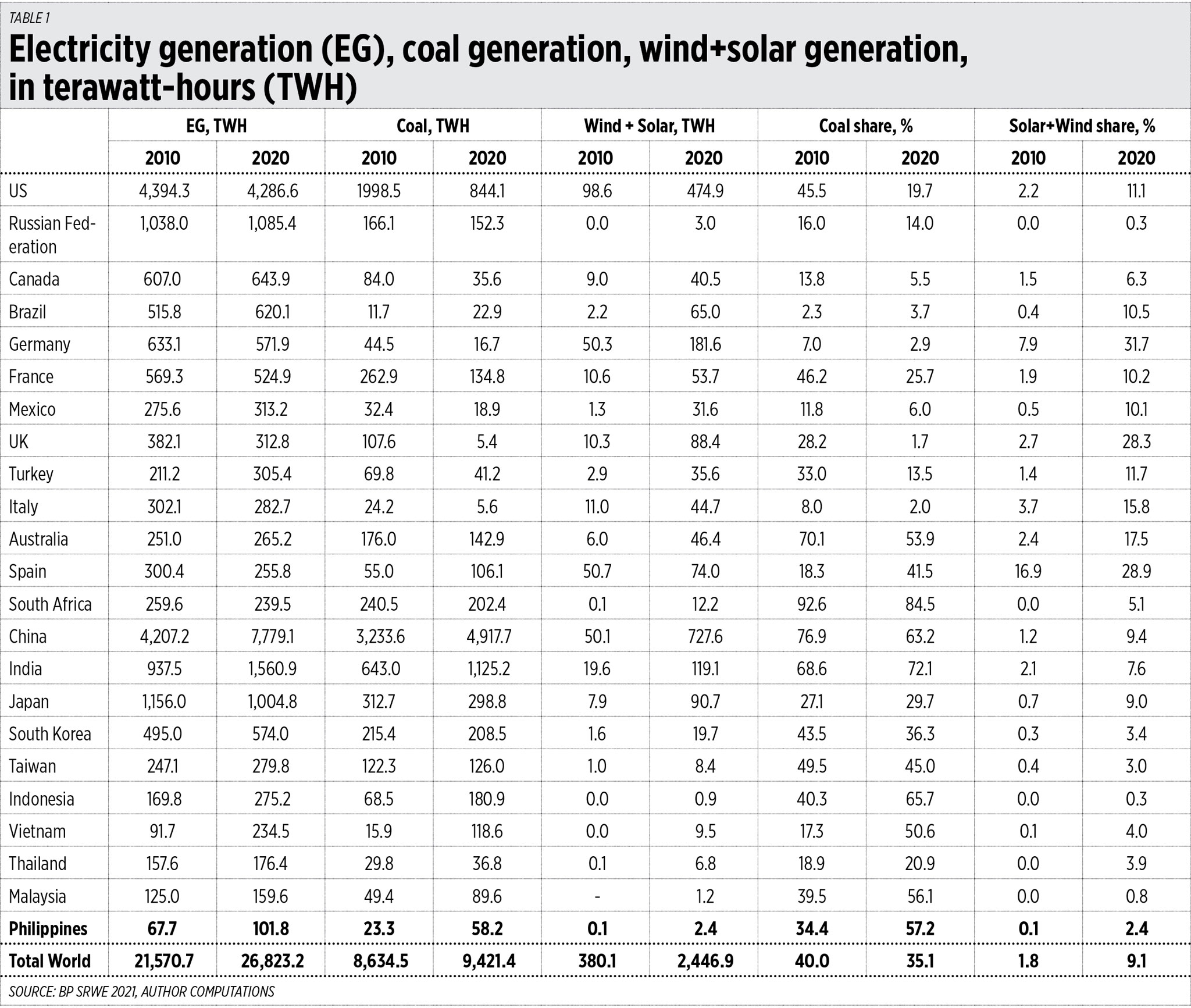 The numbers above show the following.

The Philippines’ 58.2 TWH coal generation in 2020 is actually small, only half of Vietnam and Taiwan’s, a third of Indonesia’s, nearly a fourth of South Korea and Japan’s, 1/14 of the US’, and 1/85 of China’s coal generated power. And yet many environmentalists bully the Philippines while they cannot do the same to China, India, and Russia.

Solar, wind, biomass, and run of river hydro are given subsidies via feed-in tariff (FiT), fixed and guaranteed price for 20 years under the Renewable Energy (RE) law of 2008 (RA 9513). So, after 13 years, solar, wind, biomass can produce only 3.7% of total electricity generation.

IEMOP also reported high demand forecast accuracy of the Enhanced WESM Design and Operations (EWDO) with five-minutes interval, day before forecast for peak demand is high 99.2% in Luzon grid and 99.0% in Visayas grid.

The Philippine Electricity Market Corp. (PEMC), the governing board of the Wholesale Electricity Spot Market (WESM), is monitoring compliance by market participants to EWDO.

The good thing in the Philippines electricity market is that there is bigger role for private sector competition in power generation and retail distribution. Market operations are now in the hands of the private sector too. The only thorns are a private monopoly in transmission (granted a Congressional franchise) and the endless lobby to amend EPIRA and some power plants to remain in government hands and hence, non-competitive.

The Philippines should prioritize higher growth and more job creation for its people via cheap and stable energy, not the environmental lobby to kill fossil fuels and thus court frequent blackouts by relying on unstable, unreliable, non-dispatchable wind and solar.

EPIRA and power privatization are working