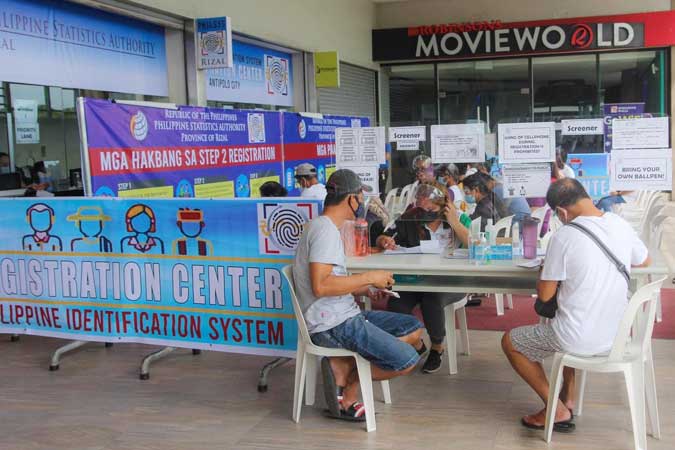 THE PHILIPPINE Statistics Authority (PSA) said it is on track to meet its national ID registration target of 50–70 million by year’s end.

“The PSA is on track to hit the 50-70 million registration for 2021. The PSA registration teams, all over the country, are registering about 250,000 registrants per day in 81 provinces and the five provincial offices of the NCR (National Capital Region),” PSA Undersecretary Dennis Clare S. Mapa said in a text message Tuesday.

He said the target is to complete both the demographic and biometric registration processes within the year for the program, which is known as the Philippine Identification System (PhilSys).

As of July 16, the agency was able to complete 38.157 million step 1 registrations through house-to-house visits and visits online platform.

The first step captures demographic data on registrants. They are then scheduled for the next step, which is biometrics collection at designated sites.

The PSA has recorded the biometrics of 19.257 million registrants.

A parallel effort to get more citizens to open bank accounts saw the opening of 4.87 million accounts with Land Bank of the Philippines, which maintains a presence at the registration centers.

Mr. Mapa said the PSA and the central bank have completed printing 2.1 million national ID cards so far and released 1.82 million to the Philippine Postal Corp. for delivery.

Republic Act 1105, signed in 2018, established PhilSys as the national ID, with the intent of serving as the single ID in lieu of the multiple other forms of ID deemed acceptable for transactions like opening bank accounts.

The Bangko Sentral ng Pilipinas last month ordered banks to accept the national ID as a sole proof of identity for those wanting to open accounts.

The national ID is also expected to help the government with its social programs. The lack of a centralized identification system was blamed for the slow distribution of cash aid to poor households last year. — Beatrice M. Laforga

Biodegradable plastics may end up doing more harm than good

56 flagship projects to be completed by 2022