I am pleased to share with our readers a piece based on our latest report for GlobalSource Partners (globalsourcepartners.com), a subscriber-based network of independent analysts covering emerging markets. Christine Tang and I, assisted by Charles Marquez and Shanee Sia, are their local partners.

Since the pandemic, President Rodrigo Duterte’s economic team has had its hands full trying to save the economy from slipping deeper and deeper into recession. Part of the job was to convince Congress to give the executive branch spending leeway to fight the pandemic, accomplished through the Bayanihan I and II Acts, while reigning in lawmakers’ clamor for higher stimulus spending, done by capping the supplemental budget for this year to less than 1% of gross domestic product (GDP) and getting both houses to stick to its proposed P4.5 trillion national budget for 2021. 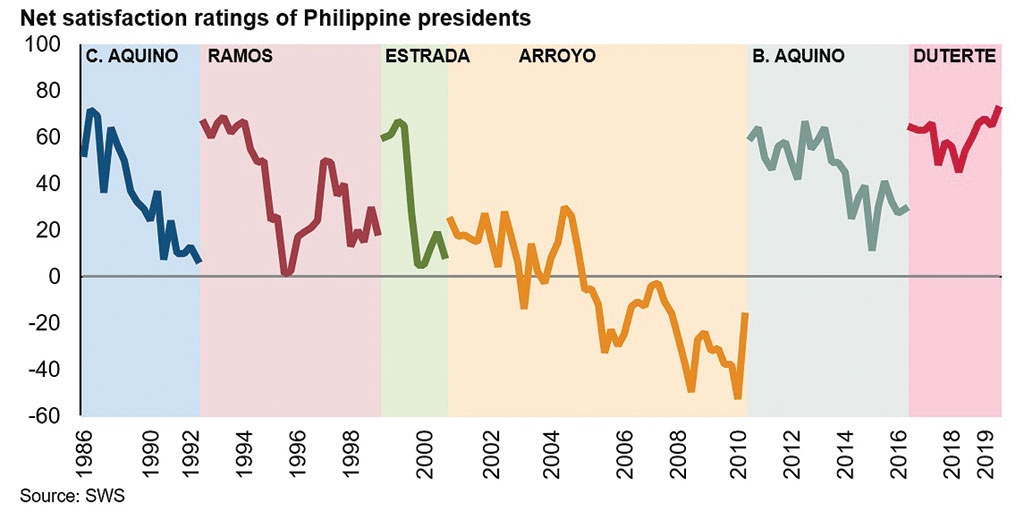 It has so far gotten the green light of both houses on two of the three, i.e., CREATE and FIST, with the less contentious GUIDE still awaiting the Senate’s nod. Although these bills still have some milestones to hurdle, notably reconciliation of differences between the versions passed by the two chambers, hopes are high that the 2021 budget together with CREATE and FIST, will be done by early Q1, 2021.

Many in the business community are rooting for the House to adopt as closely as possible the Senate version of CREATE to facilitate its quick passage. The Senate version keeps the structural reform thrust of the original Executive and House versions but tweaked to be more attuned to the impact of COVID-19 on MSMEs, hospitals and educational institutions, and the requests of PEZA locators for longer transition periods. It will also provide a needed fiscal stimulus of around P250 billion over the next two years (counting the retroactive application to July 2020), and most crucially, will lay to rest contributory uncertainty over Philippine tax regime deterring  investments due to its delayed passage.

To optimize on its impact in attracting investors many of whom are looking for new destinations due to the disruptions from COVID-19 and the US-China trade and tech wars, it would be ideal to package CREATE with a critical mass of other investment reforms that will demonstrate resolve. But with less than 18 months to go before the 2022 elections, has the window closed?

Many are hoping not. After all, amidst the hardships brought about by the pandemic, the President still enjoys tremendous trust and approval with unparalleled popularity ratings of over 90% which ought to give him immense influence over Congress even at this late stage of his administration.

Moreover, with his economic team’s track record of securing difficult reforms, some decades in the making (e.g., TRAIN, Rice Tariffication Act, Bangsamoro Organic Law, National ID Law), the hope is that more landmark laws can be pushed through the legislative mill in the narrow window between now and election season; realistically, about six months’ time.

While a pandemic may not be a good time to be thinking of structural reforms, there may be an opportunity to ride on the recently signed Regional Comprehensive Economic Partnership (RCEP). The RCEP binds its 15 signatories, i.e., the 10 members of ASEAN, Australia, China, Japan, Korea, and New Zealand, which together account for about 30% of global GDP and 30% of world population, to higher level commitments compared with existing free trade agreements (FTA).

Analyses of RCEP suggest that the agreement’s immediate value lies not in the incremental tariff reductions, which may take up to 20 years to implement, but in the promise of seamless production networks among the members who will be tied to common standards, disciplines on intellectual property, rules of origin, customs processes, e-commerce, and competition policy. Within this framework of stable and predictable rules, the Philippines could aspire to becoming a regional manufacturing and services hub, thereby creating much needed domestic jobs.

RCEP with the lower tax regime under CREATE along with proposed amendments to the Public Services Act (PSA), the Foreign Investments Act (FIA), and the Retail Trade Liberalization Act (RTA) strung together would send a powerful signal of the Philippine’s readiness to welcome foreign capital to help with post-pandemic recovery, offering a light at the end of the current gloomy tunnel.

The latter three bills have been approved by the lower house and are at varying stages of deliberations in the Senate, requiring the executive’s close shepherding to ensure speed. The RCEP too still needs the Senate’s ratification, a process that based on past experiences could take anywhere from one to three years.

Former International Monetary Fund (IMF) chief Christine Legarde used to counsel countries to fix the roof while the sun is shining. But for those who have spent a lifetime incrementally pushing reforms in the Philippines, one ought never to waste a good crisis.

A. Pending the President’s Signature

2. FINANCIAL INSTITUTIONS STRATEGIC TRANSFER (FIST). The executive’s proposal aims to facilitate the disposal of financial institutions’ non-performing assets through tax and other incentives on the transfer of these assets to and from special purpose corporations created under the law. As with CREATE, the House of Representatives adopted the executive’s version while the Senate introduced regulatory and loan coverage amendments.

B. For reconciliation in Bicameral Conference Committee

C. Approved by the House of Representatives; Pending Second Reading in the Senate

4. AMENDMENTS TO FOREIGN INVESTMENTS ACT. The proposal seeks to exclude the “practice of professions” from the coverage of the law and to reduce the number of direct local hires of foreign investments in SMEs from 50 to 15.

5. AMENDMENTS TO RETAIL TRADE LIBERALIZATION ACT. The proposal seeks to lower the $2.5-million minimum paid-up capital for foreign retailers, among others. The bill approved in the lower house set the threshold at only $200,000.

D. Approved by the House of Representatives; First Reading in the Senate

6. GFI’S UNIFIED INITIATIVES TO DISTRESSED ENTERPRISES FOR ECONOMIC RECOVERY (GUIDE). The two main features of the proposal are to (a.) increase the capital of three government financial institutions, namely, Land Bank, Development Bank of the Philippines and Philguarantee Corp. to enable them to assist in pandemic recovery efforts, and (b.) mandate the two banks to set up a special holding company to assist strategically important industries in various sectors.

7. AMENDMENTS TO PUBLIC SERVICES ACT. The proposal seeks to amend the 84-year-old law to exclusively designate as “public utility” the distribution and transmission of electricity and waterworks and sewerage systems. Under the Constitution, a public utility can only be operated by firms that are 60% owned by Filipinos. The aim is to allow more foreign participation in other public services (e.g., in telecommunications and transportation) to enhance competition, improve service quality and lower the costs to consumers.

E. For ratification by the Senate

Romeo L. Bernardo was finance undersecretary during the Cory Aquino and Fidel Ramos administrations. He is a Board Trustee/Director of the Foundation for Economic Freedom, the Management Association of the Philippines and the FINEX Foundation.

Spotify to launch in 85 new markets, reach more than a billion listeners