Several observations can be gleaned from the recent poverty survey (2018), especially about two clusters of regions: “North” for Northern Luzon and “South” for Mindanao. 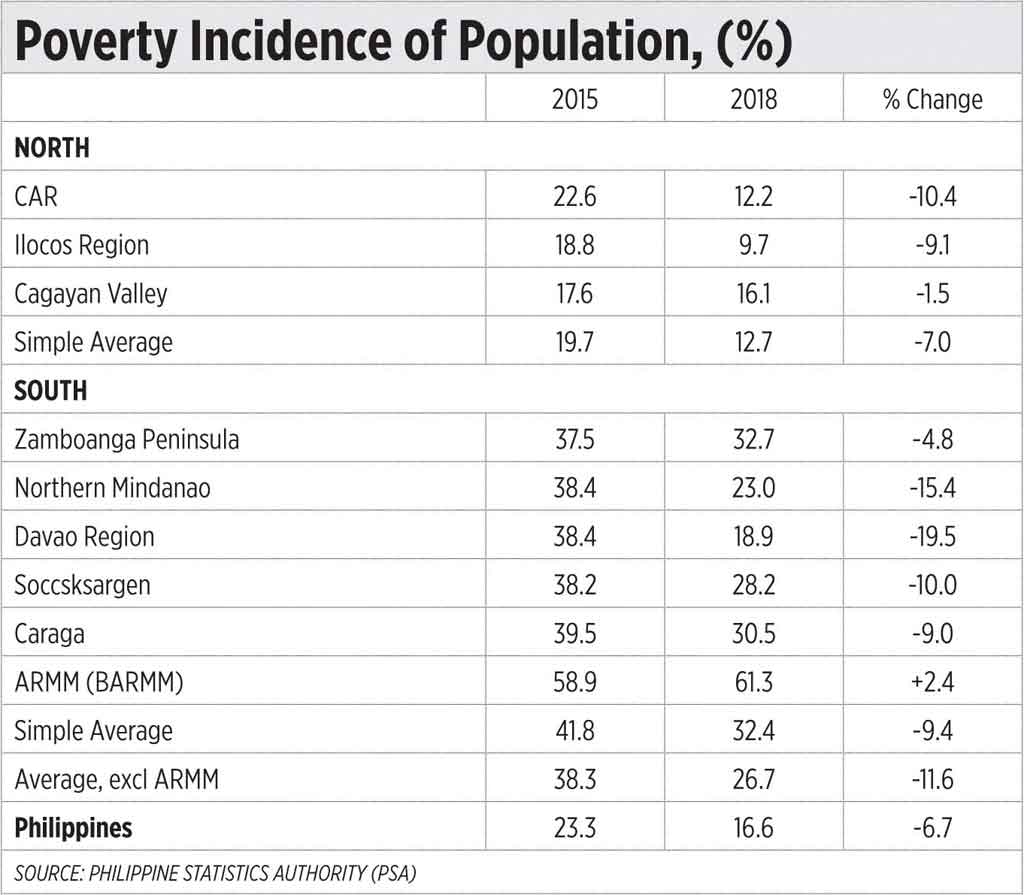 The gap deteriorated due to the limited progress in ARMM (the Autonomous Region in Muslim Mindanao, now the Bangsamoro ARMM). With a new governance structure and development framework, the 2021 survey is hoped to turn out better for the region.

Past articles showed the gaps in farm productivity between the North and the South, foremost in rice and corn. In addition to the said crops, the North cultivates high-value crops like highland vegetables. It also has more developed irrigation systems, such as Magat River in Isabela and San Roque Irrigation in Pangasinan. Magat is a multi-purpose dam which is used primarily for irrigating about 85,000 hectares (ha) of agricultural lands, flood control, and power generation. San Roque, another multi-purpose project, can irrigate 70,000 ha during the dry season. The North also has a more developed road network than the South.

The South, however, is more diversified in crops as well as fisheries. It hosts export products, such as banana, pineapple, and rubber. It also has more agro-industrial plants, such as fruit canning, fish canning, and diversified coconut products.

There are noteworthy developments in the South. The widening of roads to four-lane highways is a game changer for entrepreneurs. Trade has been facilitated across regions due to lower logistics costs. The cold storage business has expanded according to the Cold Chain Association of the Philippines. There is also improved access to inputs and markets.

Further, the “rest and recreation” hub in Davao City has increasingly become popular among residents of the Davao region, South Caraga, and Soccsksargen. Property development is on a positive trajectory.

A key intervention is infrastructure development to help the lagging South. The local government units must strengthen project selection and project execution.

In BARMM, the challenge is even greater. Investment in tree crops is seen to have a positive outcome considering the suitability of the region to growing them. It has similar agro-climatic patterns as Indonesia, Malaysia, and South Thailand. The ASEAN experience showed that tree crops can significantly contribute to poverty reduction. But scale is critical to yield, quality, and processing.

Lastly, Mindanao must attract investors given its idle and unproductive lands.

A quarter of the Philippine market (some 25 million) will be primed further with development initiatives. Mindanao is also the strategic link to the Brunei-Indonesia-Malaysia-Philippines East ASEAN Growth Area, the home of 70 million people.

Rolando T. Dy is the Co-Vice Chair of the MAP AgriBusiness Committee, and the Executive Director of the Center for Food and AgriBusiness of the University of Asia & the Pacific.

An appeal to Congress to pass CREATE