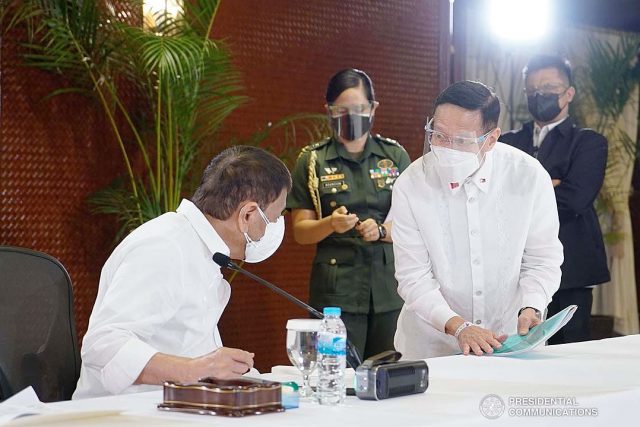 PRESIDENT RODRIGO R. Duterte has barred Cabinet officials from attending without his approval Senate hearings investigating the government’s alleged misuse of funds against the coronavirus.

In a taped speech aired on Tuesday night, the President also accused senators of using the probe to harass people.

“I will require every Cabinet member to clear with me any invitation,” he said.

The Senate is looking at multibillion-peso deals between the government and private contractors for what it suspects were overpriced face masks and other medical supplies.

Mr. Duterte said senators have been grilling witnesses for hours, wasting time that should otherwise have been used at work. Other resource persons wait on standby and end up not being called to testify, he added.

“Why insist on this requirement only at this late stage of his term?” he asked. “And why only now when the possibility of massive graft and corruption is the target of the Senate investigation?”

“It is in the best interest of the President to make sure all of these allegations are directly answered immediately,” the political analyst said.

Mr. Duterte cited as an example Health Secretary Francisco T. Duque III, who he said had not been “in control” of the agency because he’s been busy attending legislative hearings.

“The President can do this for what is called question hour, but not for a legislative investigation,” he said in a Facebook Messenger chat.

For the latter, the official must credibly invoke executive privilege, which is inapplicable here,” he added.

But the Supreme Court in 2006 “struck down Executive Order No. 464 and the sections that, taken together, attempted to expand the scope of officers covered by executive privilege and render the claim to privilege unchallengeable by Congress due to presidential silence/nonconsent to appearance,” Mr. La Vina said.

In that ruling, the tribunal upheld the right of the President to prevent officials from participating in legislative inquiries known as a question hour, where department heads appear before lawmakers to answer questions on matters relating to their office.

The Supreme Court later struck down the program for being illegal.

These types of information include military, diplomatic and other national security matters; presidential conversations, correspondences and discussions in closed-door Cabinet meetings and information on investigations of crimes by law enforcement agencies.

Executive Secretary Salvador C. Medialdea earlier said the Senate blue ribbon committee had summoned witnesses “for further bullying,” adding that many of them have been “criminally condemned.”

Senator Richard J. Gordon, Sr., who heads the body, said the Senate was just doing its job. Senator Ana Theresia N. Hontiveros-Baraquel has said the Senate is a co-equal government branch and the probe is part of its constitutional duty.

The presidential palace, she added, should let the Senate do its job in ensuring that the people’s money was not misused.

Meanwhile, Justice Secretary Menardo I. Guevarra said he had issued a lookout order against six officials of Pharmally Pharmaceutical Corp. and former presidential economic adviser Michael Yang, who is allegedly a financier of the company.

Pharmally is a private contractor that cornered at least P8 billion in state contracts for medical supplies.

The Justice department also issued a lookout order against two former Budget officials suspected to have facilitated the scam.

Mr. Gordon sought Mr. Yang’s inclusion in the lookout bulletin in a letter to the agency, the Justice chief told reporters in a Viber group message.

A person under a lookout order is not barred from leaving the country but their travel will be monitored, and government authorities will be alerted if they do leave the country. — Kyle Aristophere T. Atienza and Bianca Angelica D. Añago

Marcos party names his only son its presidential bet