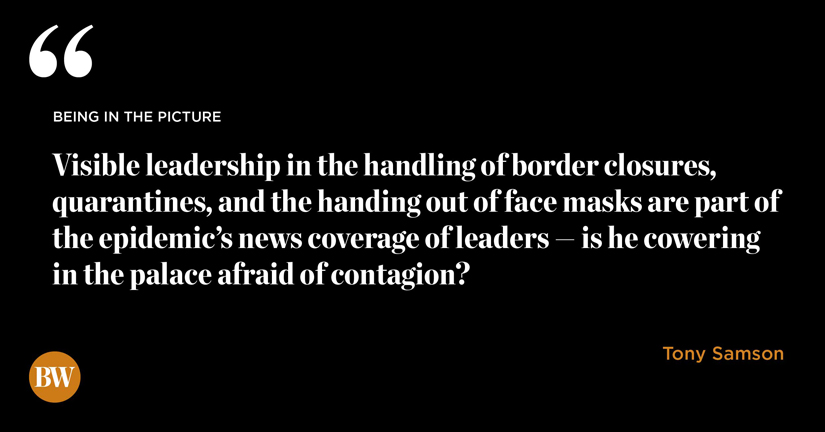 PICTURES, now increasingly digital and posted in social media, record an event and who were there (if they did not leave the event too early). Being in a photo proves that one was at the event, not necessarily to lead it or even to influence what happened. The inclusion in the group shot is an opportunity to brag about connections — is this why these are called photo opportunities (or photo ops)?

Photos publicize otherwise mundane events like the ground-breaking for a new condo building (personalities with hard hats on heads, and in their hands, shovels with ribbons in the pretend act of digging into a prescribed square of ground), donations to worthy causes (shaking hands in front of a billboard-sized check to specify the donation’s amount), and a group caucus on the dangers of racial profiling in connection with epidemics.

With smart phones, the photo ops have logarithmically intensified. The selfie has become a genre of photo moments where the photographer is also in the frame, usually with a celebrity accosted for the purpose — she was just shopping in the mall, with a face mask.

The old “firing squad” photo of a wedding couple with their entourage at the altar steps is giving way to poses of unrestrained glee. The now routine poses involve flung arms, sly looks at the shutter, and generally gravity-defying poses which can be held for five seconds. The implied message proclaims: we are not a boring couple and our friends are even nuttier.

Is it time to introduce this same sense of frolic for photo moments in business settings? After all, annual reports which will be coming out in waves in the coming weeks already allow group pictures in unlikely settings like the CEO and his team inside large pipes for infra projects and mountain climbing in a team-building exercise for the board.

Visibility is now one of the leadership attributes as once enshrined in the iconic (but perhaps now a bit dated) book In Search of Excellence (1982) by Tom Peters and Robert Waterman, Jr. which tracked 43 excellent companies. A few of these, like Atari, Texas Instruments, and Hewlett Packard, have since disappeared from the corporate scene.

The prescription for management by walking around (MBWA) required managers to walk randomly around the office to show visible leadership (or an annoying pestering of people trying to work). So, executives making the rounds and dropping in for coffee with the staff may be a new photo op — I brought some doughnuts.

Visible leadership in the handling of border closures, quarantines, and the handing out of face masks are part of the epidemic’s news coverage of leaders — is he cowering in the palace afraid of contagion?

A visible political leadership in disaster relief, terrorist attack (afterwards), and even the inauguration of a plant to project a friendliness to business investors in the country are part of the job description. These ceremonial events become visible commitments to the common welfare.

A photo release in media later can be accompanied by an article on the event as well as the caption on the people in the photo (including an unidentified guest — second from left). The release may record an event that happened some time back, so no longer significant for its news value. It only matters that someone was in the picture.

Photo ops are no longer limited to people. Lately, houses of non-celebrities (somewhere in Alabang) are popping up. These shots of colorful sofas and paintings of well-known artists against white walls are unadorned by people. Still, they provide a cache’ for the classier set. Magazines that feature architecture and décor are bought in commercial quantities and casually left on top of the coffee table — the same one in the photo, My Dear.

Anticipating the not-too-distant national elections, photo ops are sought by potential candidates and their handlers. The best ones require no caption to track the busy schedule and good health of a leader visiting his constituency and showing up for speaking engagements, after a good nap. What about billboards along the busy highway featuring a mayor in denims? Everything is fair game for the visibility index to rise.

Unlike video (with sound) the photo op does not carry invectives and unprovoked attacks on absent targets. Pictures without words only show what the leader appears to be doing or at least where he’s been… even for a few minutes.