RESIDENTIAL property prices increased by 5.6% in the first quarter, primarily due to higher costs of townhouses, duplex housing units, and condominium units.

Data released by the Bangko Sentral ng Pilipinas (BSP) on Thursday showed the Residential Real Estate Price Index (RREPI) rose by an annual 5.6% in the January to March period, faster compared to the 4.9% increase in the previous quarter and a reversal of the 4.2% decline in the same period in 2021.

The growth in property prices in the period was the also fastest since the 6.3% print logged in the third quarter last year. 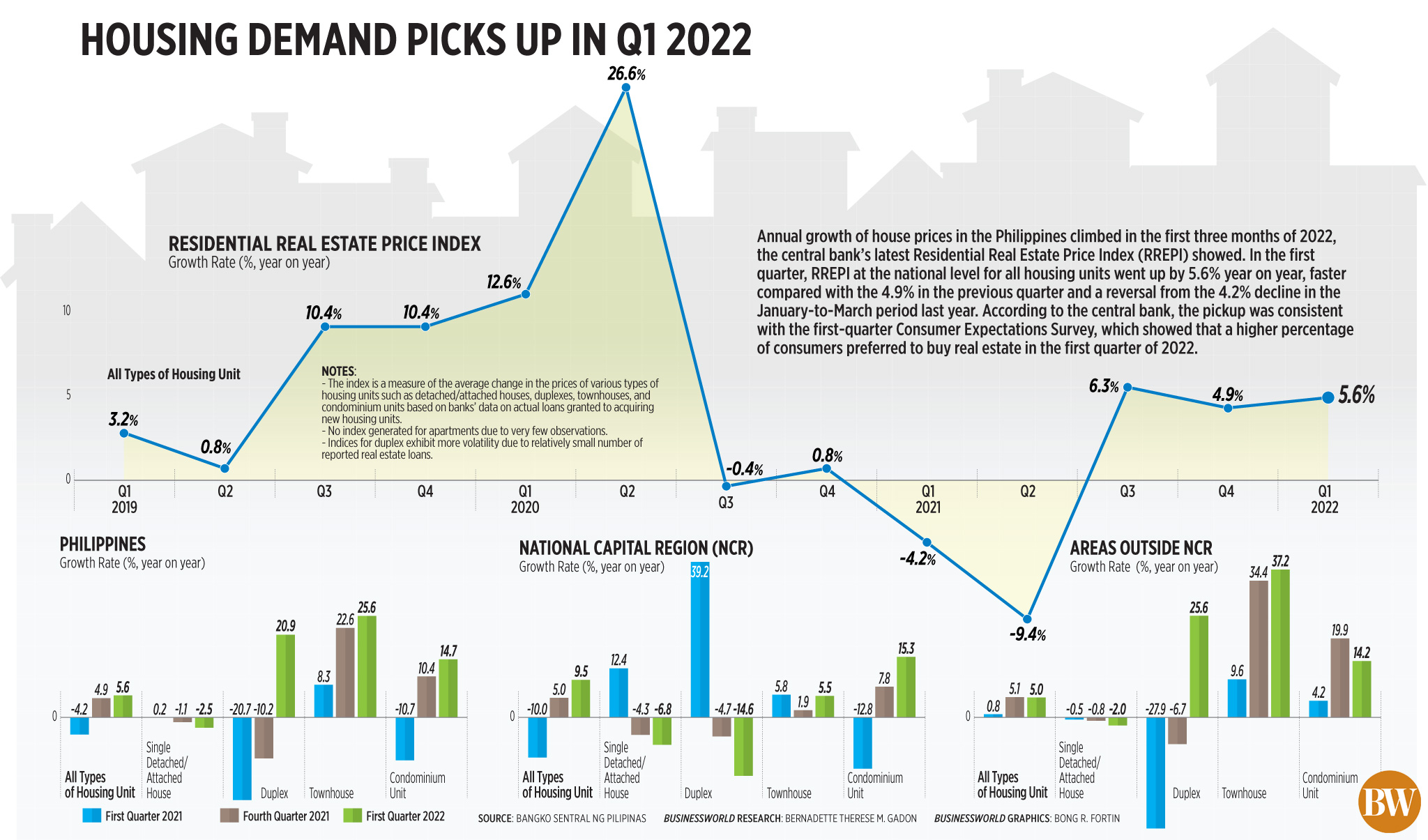 The central bank said the pickup was consistent with the results of its first-quarter Consumer Expectations Survey, which showed a higher percentage of consumers preferring to buy real estate in the period.

The RREPI tracks the average change in prices of residential properties across housing types and locations, which gives the central bank insights into the property market where bank exposure is regulated.

Property prices rose as raw materials are being delivered late due to global supply chain issues, driving construction costs up along with higher prices of imported materials due to a weaker peso, Asian Institute of Management economist John Paolo R. Rivera said.

Nationwide, the prices of condominium units rose by 14.7% year on year in the first quarter, reversing the 10.7% decrease in the same period last year.

There is robust demand for horizontal projects such as townhouses and duplex as the market starts to recover, said Joey Roi H. Bondoc, associate director for research at Colliers International Philippines.

“You have to note that employees are now starting to return to the office. Those that went back to their provinces (in 2020) are now going back to Metro Manila, at least for the first quarter of the year,” Mr. Bondoc said.

Prices of duplexes and townhomes increased by 25.6% and 20.9%, respectively, in the January to March period.

Meanwhile, data from the central bank showed residential home loans in the first quarter contracted by 9.2% year on year and by 30.2% compared to the fourth quarter of 2021.

Almost three-fourths (74.3%) of these loans were used to purchase new single-detached/attached houses (47%), followed by condominium units (38%) and townhouses (14.4%).

Mr. Bondoc said the outlook for the property sector will be affected by central banks’ tightening and its impact on the global economy.

“I would say that we need to watch out for inflation and subsequent increases in interest rates and its impact on mortgage rates. Moving forward, we need to closely observe the impact of existing economic indicators,” Mr. Bondoc said.

“We need to consider the global recession also. What will be the impact of the US recession on remittances? We need to watch out for its impact on our remittance inflows moving forward,” he added.

The BSP on Thursday announced that its policy-setting Monetary Board decided to hike borrowing costs by 25 basis points (bps), bringing the key rate to 2.5%, to help stem rising inflation. This is despite market expectations of a 50-bp increase following the US Federal Reserve decision to raise rates by 75 bps at its own meeting last week due to surging prices.

Thursday’s hike followed an increase of the same magnitude at the Monetary Board’s May 19 meeting that kicked off the BSP’s tightening cycle following the cumulative 200 bps in cuts made in 2020 to support the economy amid the coronavirus pandemic.

Headline inflation reached 5.4% in May, faster than the BSP’s 2-4% target for the year. Year to date, inflation has averaged 4.1%.

Meanwhile, cash remittances increased by 2.7% year-on-year to $10.167 billion in the first four months of the year. The BSP expects remittances to rise by 4% this year amid rising deployment and expanded channels for sending funds. — Keisha B. Ta-asan

Peso climbs vs dollar on slower US CPI in July, stock index’s rise