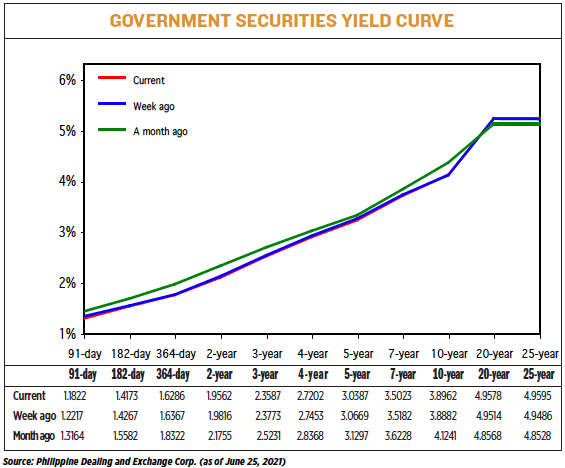 YIELDS ON government securities (GS) at the secondary market inched down last week following the Bureau of the Treasury’s (BTr) auction of reissued 10-year bonds and announcement of its July borrowing program.

GS yields, which move opposite to prices, fell by 1.32 basis points (bps) on average week on week, based on PHP Bloomberg Valuation Service Reference Rates as of June 25 published on the Philippine Dealing System’s website.

“The GS curve was generally sideways [last] week with the movement largely influenced by the BTr’s reissuance of the FXTN 10-61 last Tuesday and the subsequent release of its auction schedule for July,” Philippine Bank of Communications (PBCom) Senior Trader Justin Robert G. Ladaban said in an e-mail, referring to the 10-year T-bonds auctioned off last week.

“The BSP (Bangko Sentral ng Pilipinas) decision to keep key rates unchanged was widely expected by the market, so there was hardly any reaction from there,” Mr. Ladaban added.

“Selling ensued in liquid [five- to 10-year] securities leading to a steeper curve as yields in the belly to [the] back ended 5-9 bps higher,” FAMI said.

The Treasury borrowed P35 billion as planned via its auction of reissued 10-year T-bonds on Tuesday. Bids for the papers, which have a remaining life of five years and 10 months, stood at P65.091 billion, nearly twice as much as the auction volume and also more than the P50.25 billion in tenders seen when the same notes were last offered on March 9.

The 10-year bonds fetched an average rate of 3.185%, down by 54.7 bps from the 3.732% quoted previously. The Treasury also opened its tap facility to raise another P5 billion via the debt papers to accommodate the excess demand and take advantage of the low yield.

Meanwhile, the BTr hiked its planned borrowings from the local market to P235 billion in July as it seeks to offer longer tenors amid strong demand and a low-rate environment.

On the other hand, the BSP kept its key interest rate at a record low for a fifth straight meeting on Thursday, as it vowed to maintain an accommodative stance to support economic recovery.

The BSP left the rate on the overnight reverse repurchase facility at 2%, as expected by 14 of 16 analysts in a BusinessWorld poll. Interest rates on the overnight deposit and lending facilities were also kept at 1.5% and 2.5%, respectively.

At that meeting, the central bank raised its inflation outlook for this year to 4% from the previous forecast of 3.9%. This matches the upper end of the BSP’s 2-4% target.

“Amid the upward revision of the BSP’s inflation forecast…investors remained cautious and will probably keep a close eye on future CPI (consumer price index) prints, along with any changes to [the US Federal Reserve’s] rhetoric and BSP’s language,” FAMI said.

“For [this week], sideways trading is likely to be the case as players take cues from developments in the global bond space. Some defensiveness may be seen in the back-end securities heading into the 11-year auction next week,” it added.

“[The] market will more likely take its cue from the auction of the FXTN 20-20 [on Tuesday], an 11-year bond that has been quite illiquid for some time. Apart from that, I expect little else in terms of local data and events, so we’ll probably look towards flows and swings in global yields for some direction,” he said. — N.M.A. Bo