INFLATION likely quickened in August and settled above the central bank’s official target range anew, as a weaker peso pushed food prices up, according to analysts.

A BusinessWorld poll of 16 analysts yielded a median estimate of 4.4% for August inflation, nearer the lower end of the 4.1% to 4.9% estimate given by the Bangko Sentral ng Pilipinas (BSP).

If realized, headline inflation would again breach the central bank’s 2-4% annual target range after slowing to 4% in July. It will be the quickest in three months or since the 4.5% in May, and much faster than the 2.4% in August 2020. 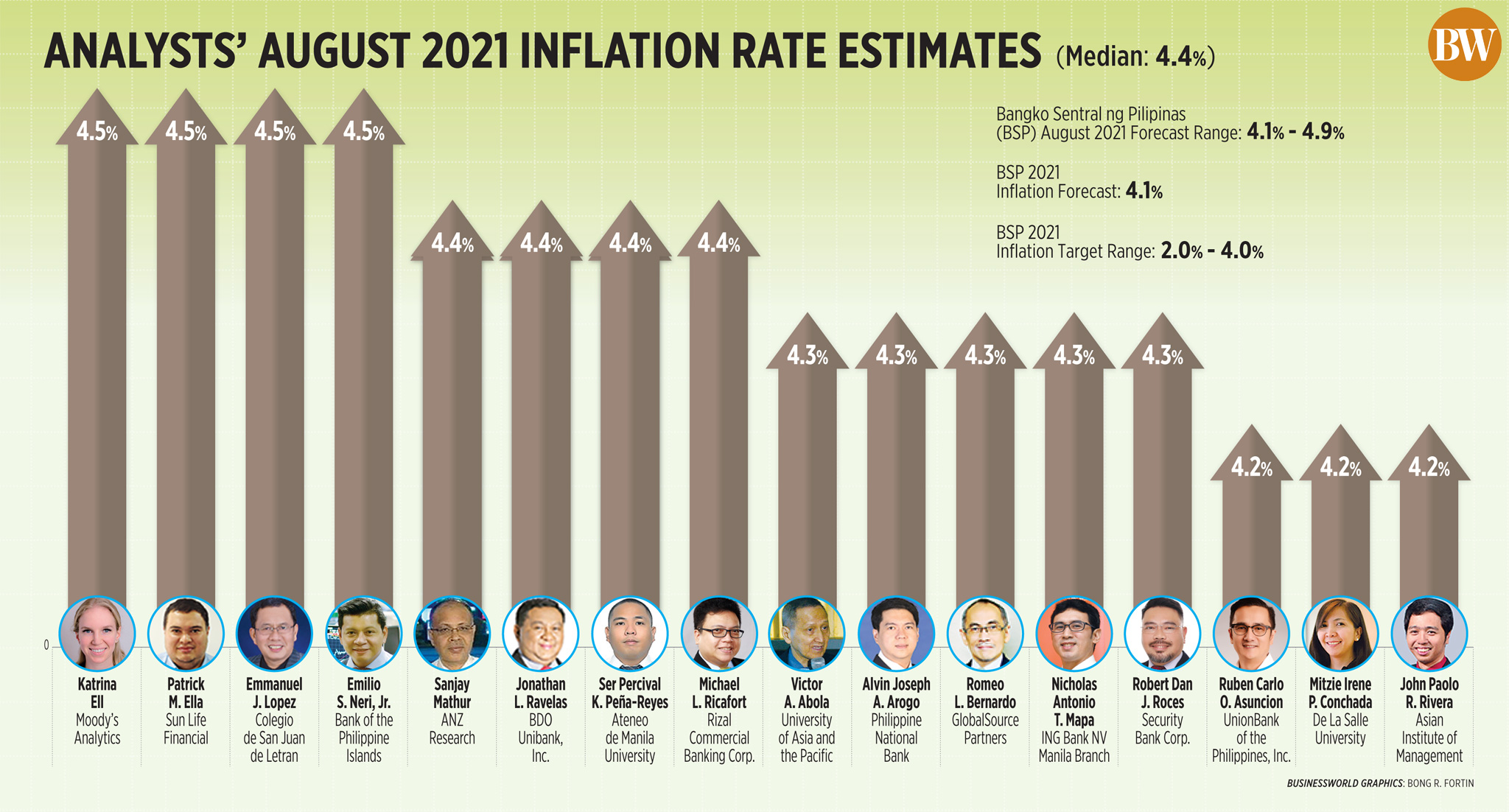 The weaker peso likely affected imports of raw materials for basic commodities, which in turn led to a faster rise in the consumer price index (CPI) in August.

“With the depreciation of the peso, prices of inputs and raw materials especially imports may have contributed to the slight increase in price of some basic commodities,” said Mitzie Irene P. Conchada, an economist from the De La Salle University.

The weaker peso could overpower the downside risk to inflation caused by slower rise in transport prices and the impact of the lower import tariff for pork products to meat prices, said Alvin Joseph A. Arogo, vice-president and head of equity research division at the Philippine National Bank.

Lockdown restrictions in August may have also disrupted supply chains. Metro Manila was under the strictest form of lockdown from Aug. 6 to Aug. 20 amid a Delta-driven surge in coronavirus infections.

“We think delivery delays and rescheduling due to checkpoints led to some additional upward price pressures but the increment may have been smaller than previous lockdowns,” Bank of the Philippine Islands (BP) Lead Economist Emilio S. Neri, Jr. said.

Last month, the Monetary Board kept the key policy rate at a record low of 2% as it vowed to support economic recovery.

With economic recovery expected to remain weak and inflation to remain elevated, analysts believe the BSP will retain its prudent pause.

In August, economic managers downwardly revised their growth target for 2021 to 4-5% from 6-7% previously, citing the impact of rising infections and reimposed lockdowns.

“The burden for reviving growth is removing mobility restrictions and fiscal support. So, all in all, we do not see the need for a shift in monetary policy,” ANZ Research Chief Economist for Southeast Asia Sanjay Mathur said.

Analysts said they expect the central bank to look past the above-target inflation, given it was mainly caused by low supply.

“Given the supply-side nature of the inflation breach, we continue to believe that BSP will look past this inflation uptick as monetary policy has no ability to control global oil prices and is incapable of making pork or vegetables cheaper,” ING Bank N.V. Manila Senior Economist Nicholas Antonio T. Mapa said.

For his part, BPI’s Mr. Neri said the BSP will likely lean towards keeping policy rates steady, in line with signals of major central banks like the US Federal Reserve and the European Central Bank. He said he believes the BSP “can justify carrying out a preemptive upward rate adjustment for the same reasons that Bank of Korea did back in August.”

“Like the Federal Open Market Committee, they [BSP] probably will make no mention of the side effects of negative interest rates on asset markets, on risk averse savers, bank fragility, income inequality,” he said.

The Monetary Board will have its next policy-setting review on Sept. 23.

AMLA amendments need to be approved before Christmas, says official