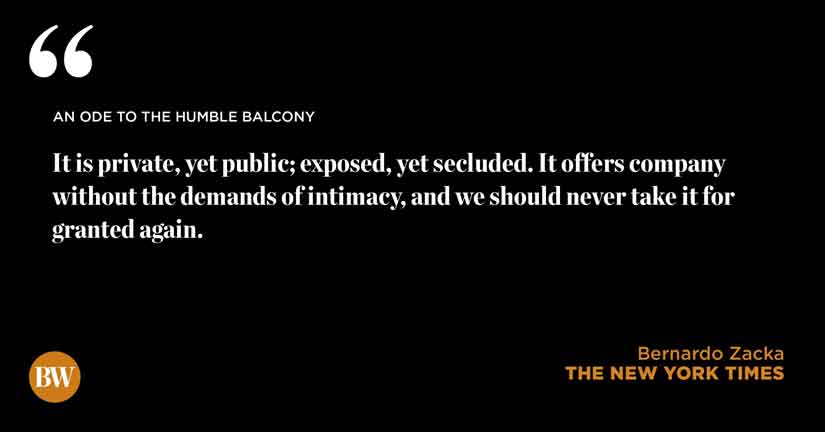 MY TODDLER and I have a new favorite activity: craning our necks to catch a glimpse of the neighbors. Since we have been instructed to stay at home in our apartment in a triple-decker in Somerville, Mass., we have gotten quite good at it.

If we place ourselves at the bottom left corner of the living room window around 6 p.m., and press our cheeks hard against the glass, we might just catch them staring blankly at the empty street. The other day, our eyes met across the driveway, yet there was none of the usual awkwardness — being stared at felt more like a relief than an invasion. Before the pandemic, I had never spoken to them, but right now even these stolen glances feel like a precious form of contact.

When I first saw the videos coming from Italy under lockdown, with people quarantined in their apartments connecting through music, my first reaction was one of awe. My second was one of longing for the architectural element that made these gatherings possible: the balcony.

By suspending ordinary social life, the pandemic is teaching us to value what we normally take for granted. For those like me who grew up around the Mediterranean, the balcony is a fact of life — one so woven into the fabric of our cities as to be practically invisible. How I wish I had one now.

As a child growing up in Beirut, it was on the balcony that we celebrated birthdays, that I read my first novels, and that I watched my parents play endless games of backgammon. As an adult returning home for the summer, that is where my feet carry me to sip a coffee, crack open a beer, or smoke a narghile — always in the company of others in surrounding buildings who appear to be doing the same. Even now, with the city brought to a standstill by COVID-19 and a suffocating financial crisis, Beirutis are turning to their balconies for momentary respite and gestures of solidarity.

The genius of the balcony is to assemble people who live within proximity, but who are otherwise strangers, around a common world of events, experiences and issues. The balcony is fulfilling this role to great acclaim today, but that is what it does, silently, in ordinary times.

A balcony is a strip of private property suspended over public space. On a balcony, one is outside, yet at home; exposed, yet secluded. This ambivalence manifests in Beirut in the use of a distinctive sartorial code. The balcony is the domain of the nightgown and the undershirt: items too revealing for the street, yet modest enough to be worn at a distance.

As an intermediary space, the balcony supports a distinctive type of reserved sociability. Its contiguity with the dwelling facilitates access to city life just as easily as it enables withdrawal from it. In my district of Beirut, where most buildings are five or six stories high, the balcony is close enough to the street to greet someone down below, but just too far to hold a prolonged conversation; close enough to witness a dispute, far enough not to have to get personally involved. It offers company without the demands of intimacy.

In the late 1950s, the Dutch architect Aldo Van Eyck used the term “threshold” to designate physical spaces — such as porches, stoops, and balconies — that connect various spatial and psychological registers within the city. Van Eyck thought of such spaces as forming an in-between realm, mediating the encounter between distinct environments, sharing characteristics with each, without dissolving into either.

Van Eyck saw thresholds not just as sites of passage, but as places of dwelling. Such spaces are appealing, he thought, because they capture something fundamental about our inclinations. When confronted with a choice between two options like individual/collective, open/closed, order/chaos, our reaction is often one of ambivalence: we want to linger at the boundary, sampling a bit of both. In this in-between realm, we feel at home and are inclined to stop and loiter. Architecture should recognize this fact, Van Eyck said and “frame our desire to tarry, make places where we can do so.” The balcony is one realization of this vision.

Like theatrical stages, balconies lie dormant until brought to life by people. Consider this: most city dwellers live in apartments they did not design, embedded in facades they cannot alter. In Beirut, balconies are the only spaces in public view that residents can particularize and make theirs. Furniture is displayed; a birdcage is suspended; plants are meticulously arranged and watered — and everything is kept clean, in a Sisyphean battle against the dust. Balconies offer a rare opportunity to leave a personal trace in an otherwise anonymous urban fabric.

In the vicinity of balconies, one is always performing. Ordinary vices are laid bare just as ordinary virtues. Alongside the polite gestures of recognition and the loose sense of community, balconies also invite voyeurism and gossip. Family disputes, love affairs, losses in temper become a matter of common interest. This can be unnerving, but it forces us to come to terms with those who live around us.

Around the Mediterranean balconies are everywhere, yet it would be a mistake to take them for granted. In Beirut, two factors were critical to their popularity: a demand for external space to take advantage of the climate and a favorable construction law that incentivized their creation.

Over the past two decades, however, the growing popularity of air-conditioning units has enabled Beirutis to control the climate inside their apartments all year long. The increasing pressure on existing real estate has also prompted the Lebanese Parliament to amend the construction law in 2004, permitting the enclosure of balconies with transparent curtain walls. This has affected new development, with balconies now frequently conceived and marketed as inward-looking spaces, functioning as extensions of the living room.

Politicians justified the measure by claiming that they were enacting what their constituents wanted — more internal space, climate control, less exposure to noise and pollution. These are indeed salient concerns in Beirut.

Yet the danger in thinking of balconies as private amenities is that it obscures their standing as a public good. As city dwellers, we all benefit from the social life they foster even though we may individually prefer to enclose our own. It is for this reason that public regulation might be called for: not to prevent each of us from getting what we want, but to help avert a collective outcome resulting from such wants — a thinning of the social fabric of the city — that we might, collectively, come to regret.

In the throes of a pandemic, this message may land on sympathetic ears. The videos from Italy are still with us, and who today wouldn’t want the reserved sociability that balconies foster? The challenge will be to keep the sentiment alive once we return to a new normal. The first few weeks after COVID-19 may be all hugs and kisses. But reserved sociability is not a second best, and we should continue to look kindly at the architecture that makes it possible even after the pandemic leaves us.

Bernardo Zacka is an assistant professor of political science at M.I.T., the author of When the State Meets the Street and the co-editor of a recent collection of essays, Political Theory and Architecture.