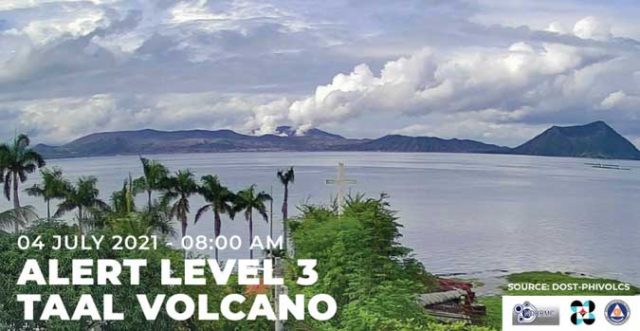 The Philippine Institute of Volcanology and Seismology (Phivolcs) reported 31 “low frequency volcanic earthquakes and low-level background tremor”  during the 24-hour period from Saturday to Sunday morning.

Alert level 3 in a 5-level system remains in effect, which means there is magma extruding from Taal Volcano’s main crater that “could drive explosive eruption,” according to Phivolcs.

A total of 3,141 people or around 788 families from the “high-risk” towns of Agoncillo, Laurel, San Nicolas, and Lemery in Batangas province were evacuated since Saturday, according to the national disaster management agency.

Police and Philippine Coast Guard teams have been assisting in the evacuation as well as in ensuring the observance of health protocols in the temporary shelters.

The Department of National Defense said on Saturday that the Department of Social Welfare and Development sent 5,000 family food packs to the Batangas Sports Complex Grand Stand, 2,000 to Laurel, and 1,500 to Agoncillo.

“The Batangas provincial government has remained self-sufficient in sending help and does not yet need immediate additional aid from the national government,” Office of Civil Defense Calabarzon Regional Director Maria Theresa R. Escolano is quoted in a statement from the Batangas Information Office. — Bianca Angelica D. Añago

Vaccination for all minors starts next month