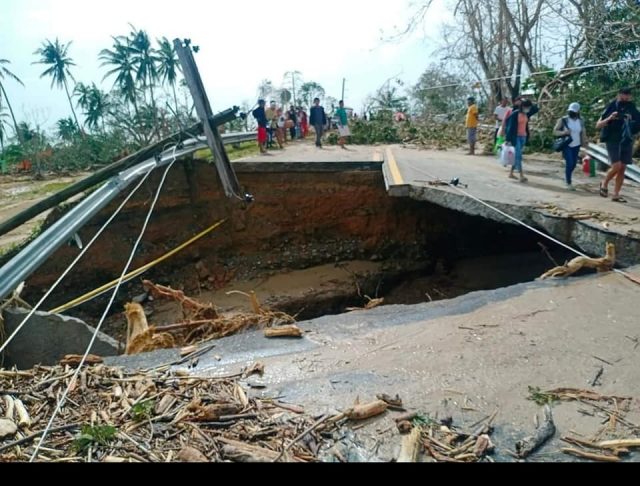 THE DEPARTMENT of Public Works and Highways (DPWH) on Monday said eight national roads were still impassable due to flooding, landslide, fallen trees and electric posts, and damaged bridges caused by typhoon Odette.

“Partial cost of damage to public infrastructure remains at P308.9 million,” the department said in a statement.

Since. Dec. 16, a total of 29 roads have been cleared and reopened to motorists, while five roads remained with limited access as of Monday.

Another closed road identified was Daang Maharlika in Southern Leyte due to landslide, debris, fallen trees, and electric posts.

Meanwhile, the National Grid Corporation of the Philippines (NGCP) said 183 poles and five towers were toppled in Bohol, based on initial aerial patrol on Monday.

A total of 598 poles and 12 towers across the Visayas and Mindanao were affected by the strongest typhoon to hit the country this year, it said.

The NGCP also said it is still finalizing assessment and has yet to determine if the power will be back in Bohol by Christmas as promised by the Energy department.

Supply has been restored in northern Cebu, Samar, and Leyte, NGCP said, after their deployed team came up with an interim scheme by synchronizing power plants to transmit power through the transmission line.

The NGCP has also restored power transmission services in the provinces of Agusan del Norte and Agusan del Sur in Mindanao with the energization of the Butuan-Bayugan 69kV line on Monday.

Meanwhile, the Philippine Rural Electric Cooperative Association, Inc., the national organization of 121 electric cooperatives, said that it has deployed teams to assist in the restoration of distribution lines. — Arjay L. Balinbin and Marielle C. Lucenio

Of pandemics past and COVID-19’s economic impact

Flatten the fear and hysteria, not the economy