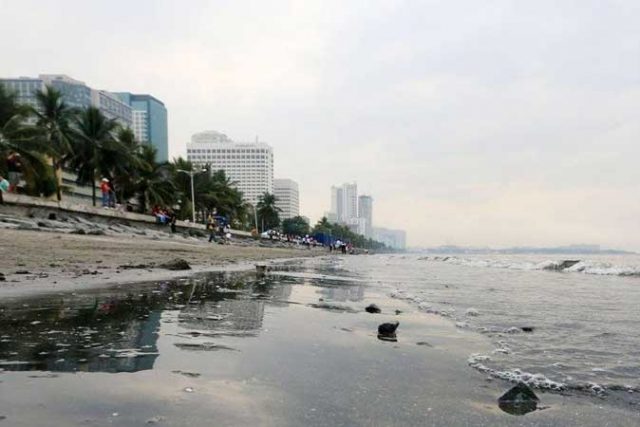 The water quality of Manila Bay is improving but scientists aren’t ready to declare it swimmable just yet.

“There’s a long way to go,” said Gil S. Jacinto, an oceanographer and retired professor from the University of the Philippines (UP) Marine Science Institute, on Manila Bay meeting Class SB status — a designation that means a body of water can be used for ecotourism and recreational activities.

The DENR has been conducting cleanup drives since Environment Secretary Roy A. Cimatu launched “The Battle for Manila Bay” in 2019.

This August, DENR noted that the fecal coliform level in Dolomite Beach dropped to 7,000 most probable number (mpn)/100ml from 523,000 mpn/100 ml in February, prompting Mr. Cimatu to say that water along Manila’s Baywalk could soon meet the 100 mpn/100ml standard for accommodating recreational activities.

Aside from fecal coliforms (which indicates bacterial contamination from humans and warm-blooded animals), DENR criteria for assessing water quality include color, oil or grease.

“While [the improvement] can be a direct result of DENR’s interventions, it could also be a result of the pandemic anthropause [the slowdown of human activity],” said Benjamin M. Vallejo, Jr., a professor at the UP Institute of Environmental Science and Meteorology.

Assessing the health of a body of water is a complex and broad topic that needs contextualization, according to Mark Jayson B. Felix, a researcher of STAMINA4Space’s GRASPED (Ground Receiving, Archiving, Science Product Development and Distribution) project.

Chlorophyll-a, Mr. Felix explained, is a pigment inherent in microalgae called phytoplankton found in the ocean, which in turn account for 50 to 85% of oxygen in the atmosphere. In a balanced ecosystem, phytoplankton provide food for sea creatures. When too many nutrients are available, however, phytoplankton may form blooms — known as red tide — that harm fish, mammals, and people.

Turbidity, meanwhile, is the measure of relative clarity of a liquid. Water that is high in particulate matter affects its clarity, and can also provide a place for pollutants to attach.

“Those parameters are just a few of the many variables that can be used to study the health and status of our oceans,” said Mr. Felix.

The dashboard, updated every quarter, showed a decrease in chlorophyll-a and turbidity levels in the Dolomite Beach area (or the portion of Manila Bay adjacent to Metro Manila) as of Nov. 3, compared to data captured between March 13–28, 2020.

The cities and regions surrounding the bay are co-responsible for keeping its waters clean, said Mr. Felix.

“Based on ground and satellite monitoring, there’s indeed a connection between Manila Bay’s rehabilitation and Cavite’s [garbage problem],” he said.

Citing other satellite images, Mr. Jacinto added that discharge into the bay from Pasig River, as well as tributaries south of the river, reach and impact the Dolomite Beach.

“We need proper waste disposal, [which is] made difficult by the continued presence of informal settlements along waterways and adjacent to the bay,” Mr. Jacinto also pointed out.

The NCR has a 100% sewerage coverage plan that’s targeted for completion in 2037. Section 8.4 of the Clean Water Act of 2004’s implementing rules and regulations calls for water concessionaires to connect sewer lines to all households and commercial establishments in the capital by the said year.

Mr. Vallejo, who is part of a team that has been monitoring biofouling indicators in the Manila Port district and the South and North Harbors since 2009, added that the bay is improving based on the decreasing levels of the unwanted buildup of small animals, plants, or microorganisms on surfaces of submerged structures.

As far as Mr. Vallejo knows, Sisiman Cove in Bataan is the only area in Manila Bay that has already met the DENR standards for swimmability.

If comparable studies in Singapore are considered, the complete positive outcome from Manila Bay’s cleanup could take between 25 and 40 years, he told BusinessWorld.

“Please recall that the Port of Singapore has an area of 600 hectares [6 square kilometers]. The Port of Manila, including the berthing areas for ships calling into port, has an estimated aggregate area of 100 square kilometers,” he added.

AWS launches interactive video service in the Philippines and Indonesia