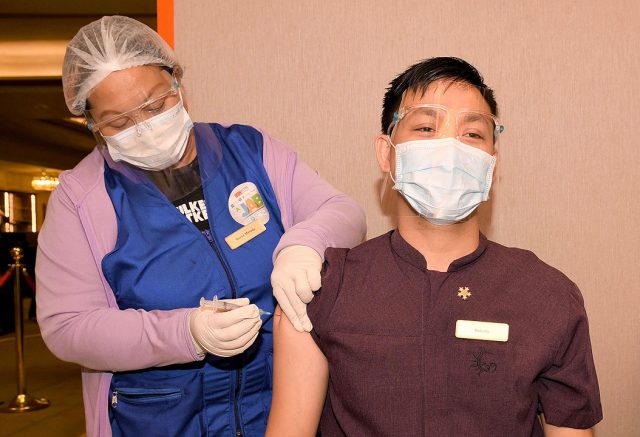 THE PHILIPPINES is still at moderate risk from the coronavirus despite a continued decline in infections, according to the Health department.

Infections in the past two weeks fell by 21%, while the average daily attack rate was 14.73 for 100,000 people, Health Undersecretary Maria Rosario S. Vergeire told an online news briefing on Monday.

The attack rate is equal to the number of infections over a two-week period divided by the population.

Ms. Vergeire also said there had been fewer swab tests for the coronavirus in 14 regions including Metro Manila.

The biggest decline in RT-PCR tests was in the capital region, whose positivity rate decreased to 16.4% in the past week from 19.3% a week earlier, she added.

The Department of Health (DoH) was checking whether the fall was due to a decline in contact tracing efforts or whether more people have been undergoing antigen testing, Ms. Vergeire said.

Metro Manila was still under moderate risk even if infections fell by 33%. Its health system capacity was at high risk, with 75% of ICUs occupied. She said.

The Philippines, which scored poorly in Bloomberg’s COVID-19 resilience study, is struggling to vaccinate its entire adult population.

MORE DELIVERIES
Presidential spokesman Herminio L. Roque, Jr. told a televised news briefing 46.38 million coronavirus vaccines had been given out as of Oct. 3. More than 21.8 million people or 28.26% of adult Filipinos have been fully vaccinated, he added.

The government is expected to take delivery of about 6.7 million more coronavirus vaccines this month under a global initiative for equal access, vaccine czar Carlito G. Galvez told the same briefing.

He said shipments under the global facility would include about 844,800 doses of the vaccine made by AstraZeneca Plc.

The Philippines will sign a contract with Johnson & Johnson’s Janssen Pharmaceuticals for 6 million doses of its single-shot coronavirus vaccine, he said.

Slovenia recently suspended the use of the Janssen vaccine after 20-year-old woman died, Euronews reported.

“We are temporarily stopping until all details related to this case are clarified,” Slovenian Health Minister Janez Poklukar said. But the “benefits continue to outweigh the risks,” she added.

Mr. Galvez said the Philippines had received almost 77.42 million doses of coronavirus vaccines. “The 100-million dose target this October is still on track, with the expected arrivals of more than 10 million procured Pfizer vaccines,” he added.

“Further, we believe the government should consider doing the same with its employees,” they said.

The groups also asked companies to encourage employees to get vaccinated, while accommodating those who can’t get vaccinated for medical reasons in a way that won’t compromise the health and safety of other workers.

The Philippines aims to reach population protection by vaccinating 50-60% of its population by yearend. — Kyle Aristophere T. Atienza

Housing backlog to ease with new law vs red tape