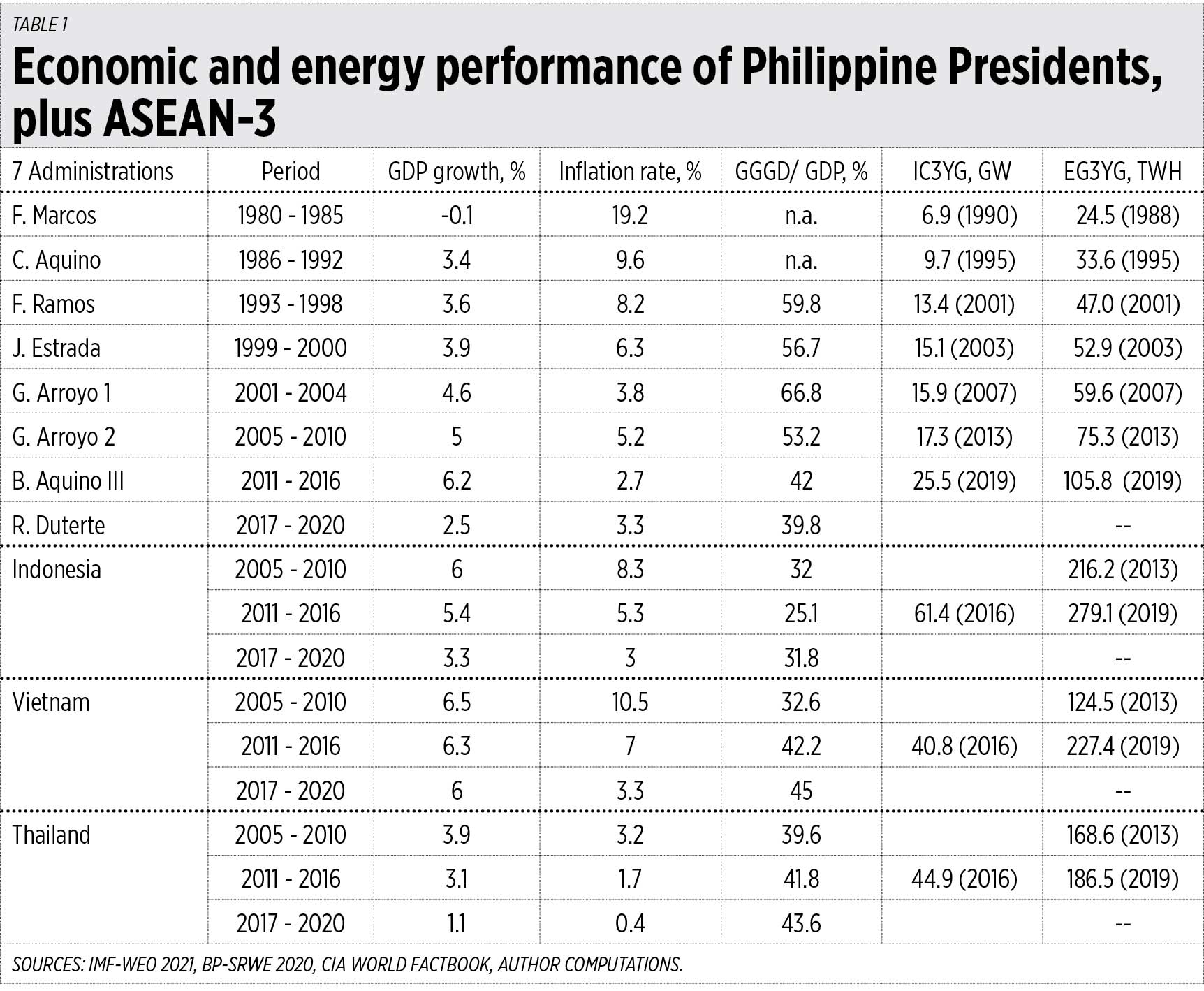 A beautiful piece here in BusinessWorld about former President Benigno “Noynoy” C. Aquino III (commonly known as PNoy) was written yesterday by my former teacher at UP School of Economics, Dr. Raul Fabella, “PNoy and inclusion.” Sir Raul observed that from 2010 to 2016, “poverty incidence had declined from 26.3% to 21.6%, an almost 5% difference in six years, a remarkable achievement in our neck of the woods and even elsewhere.”

I follow this up with additional data. In the table accompanying this piece, my sources are the following:

I got the annual data from 1980 to 2020 and computed the averages by using these two assumptions:

For No. 2, it takes three to five years for big power plants to be constructed. So, a coal or gas plant commissioned and began operation, say, in 2012 (PNoy) was actually approved around 2009 or earlier by the previous Arroyo administration. Some small plants like solar or biomass take only about two years construction. So, a lag of 2.5 to three years is assumed as credit to the previous administration.

For comparison and additional context, I added the Philippines’ three neighbors with big populations — Indonesia, Vietnam, and Thailand.

The numbers in Table 1 show the following:

1. GDP change. The PNoy administration with 6.2% GDP growth was the best performer of the seven administrations. Another remarkable fact is that while Indonesia, Vietnam, and Thailand showed a decline in average growth in the period 2011-2016 vs. 2005-2010, the Philippines under PNoy showed increase in growth over the same period. Fantastic performance.

2. Inflation rate. The PNoy administration with 2.7% again was the best performer in price stability among the seven administrations. Almost half compared with the previous period, 2005-2010, and similar to the performance of Thailand.

4. Power installed capacity. PNoy expanded it by 8.2 GW in just six years, the biggest rise compared with five previous administrations. In a sense, PNoy corrected the mistake of his mother, President Cory, who killed the Bataan Nuclear Power Plant (620 MW) with no alternative, resulting in large-scale blackouts nationwide in 1991-92.

Notice though that while the Philippines expanded electricity generation by 30 TWH from 2013 to 2019, Vietnam expanded theirs by 103 TWH, and Indonesia expanded by 63 TWH.

Last week, the Independent Electricity Market Operator of the Philippines (IEMOP) held a media briefing. Among the important data presented was that from May 30 to June 5 (including the blackouts of June 1, and yellow-red alerts days before and after that), the secondary price cap or ERC-imposed price control of P6.24/kwh was imposed 60 times.

Again, the main problem was lack of power supply — many old and ageing power plants, not enough new big reliable plants — the supply margin was only 1,658 MW vs. 3,114 MW from June 6-14. The usual government/ERC solution is price control, which actually discourages and kills investments in peaking plants.

The power generation mix from March to May 2021 was also discussed by IEMOP. I expand Table 2 by going way back to 2019 and it shows that the main workhorse, the backbone of Philippines power generation, is coal, the same power source that is heavily politicized and demonized by many political actors and activists. These groups’ beloved source, wind-solar, contribute an insignificant share of only 2.6% of total generation in 2019 and 2.8% in April-May 2021 (see Table 2). 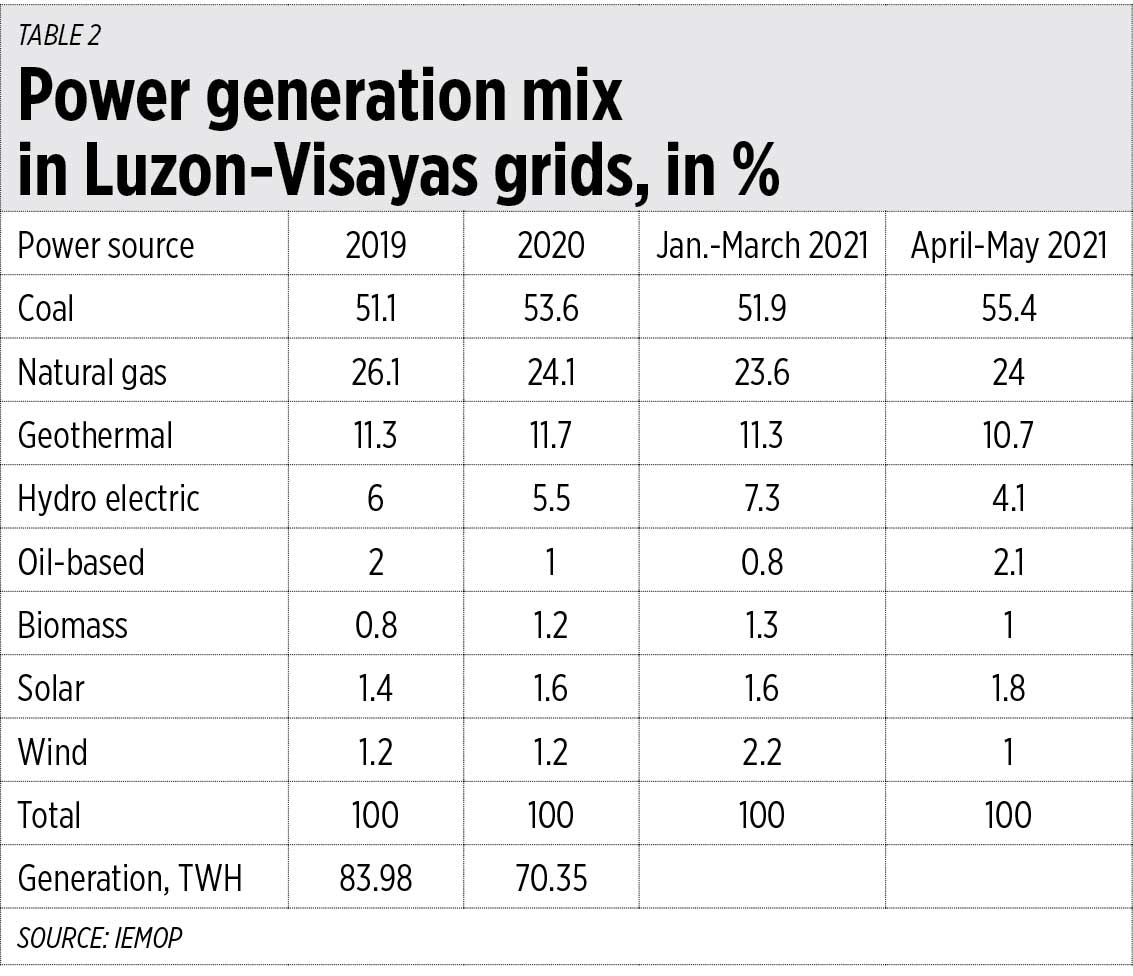 The best recent energy policies were made by PNoy. They were technology-neutral and power-agnostic policies. Just approve and commission more power plants, have more electricity generation.

The worst recent energy policies were made by the Arroyo and Duterte administrations: Arroyo with the Renewable Energy (RE) Act of 2008 (RA 9513) that institutionalized all types of RE favoritism and cronyism (especially wind-solar) and contributed to expensive electricity; and Duterte’s higher energy taxes under the TRAIN law of 2017 (RA 10863), with an excise tax of an additional P6/liter in diesel and gasoline, a coal tax increase from P10/ton to P150/ton. Then there was the Energy Department’s no more greenfield, new coal plants order issued in October 2020 as the RE lobby, especially wind-solar, continue its blackout-friendly path.

Now is not the time for RCEP

High growth under PNoy Aquino and tax cuts under Duterte