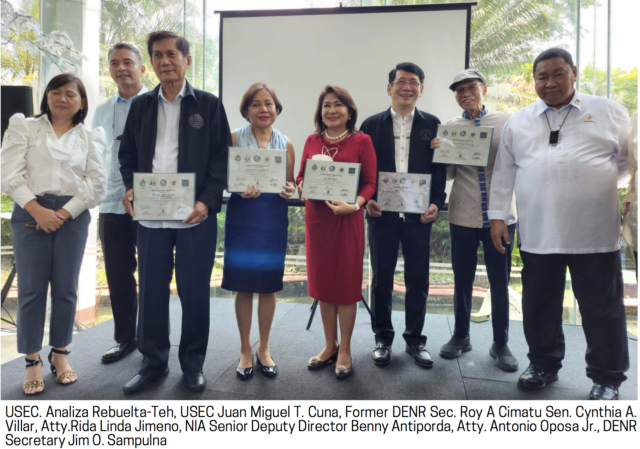 The Department of Environment and Natural Resources (DENR) has given recognition to volunteers and partners who had significant contribution to the cleanup and rehabilitation of Manila Bay during the “Manila BAYani Awards” ceremony on June 14, 2022 at the Diamond Hotel in Manila. The signatories of the award are the International Council for Environmental Law (ICEL), the DENR, Normandy Chair for Peace, the Institute for Governance and Sustainable Development (IGSD), Asia Pacific Center for Environmental Law and Juliana Oposa.

DENR Acting Secretary Jim O. Sampulna led the recognition of local government units   (LGUs), private organizations, river rangers, and individuals in Metro Manila, Central Luzon and Southern Luzon for their active participation in the Manila Bay rehabilitation program. Acting Secretary Sampulna also attributed the success of the Manila Bay Rehabilitation Program to the “strong will” of President Rodrigo Roa Duterte to accomplish a monumental task. “We would not have accomplished our task without the people and organizations who helped us as we journey along our rehabilitation and cleanup efforts. We have a lot of heroes amid all this,” Sampulna added.

Senator Cynthia Villar was specially cited in gratitude by the DENR as one of the recipients of the “Manila BAYani Award” in recognition of her efforts as the Chair of the Senate Committee on Environment because of her persistence in strongly reminding the concerned agencies to do their job as mandated by the Supreme Court under the continuing mandamus to clean the Manila Bay issued on December 18, 2008. The continuing mandamus compels the DILG, DENR and 11 other national agencies (NGAs) to rehabilitate and preserve the Manila Bay to make it fit for swimming, skin diving, and other forms of contact recreation in its waters. Based on the Order, the government agencies were given 10 years to rehabilitate Manila Bay.

Senator Villar was also recognized for her efforts in physically initiating the cleaning of Baseco Compound, in Barangay 649, Gasangan, Zone 68, Port Area, Manila which she started in 2015 thereby boosting environmental awareness among Filipinos.

She did monthly clean up and tree-planting activities as well as the construction of toilets and establishment of various livelihood projects for the residents.

Senator Cynthia Villar in addressing the poor sanitary conditions of the people who have no access to toilet facilities in Baseco, she has tapped the help of the DOH, DSWD, the City of Manila and Maynilad together and launched the “Zero Open Defecation for Baseco Compound” project in May 2017. She initiated the paving of the street and built a communal septic tank. She also sought the commitment of authorities for the regular collection of garbage to prevent solid waste accumulation in Manila Bay. In a bid to turn the compound into a model community rehabilitation project and site for urban agriculture and aquaculture, she asked the help of the Bureau of Soils and Water Management (BSWM) to establish urban gardens which have been the source of vegetables for residents’ own consumption and livelihood. Recycling projects were also initiated in the area provided by the Pasig River Rehabilitation Commission.

Together with the residents of Baseco, mangroves were also planted in the area to serve as natural barriers that will protect the community in the event of storm surges. The Baseco compound is located near the sea wall of Manila Bay, making it vulnerable to flooding and storm surges during typhoon. Aquaculture was also introduced in the area with the help of Bureau of Fisheries and Aquatic Resources (BFAR) who provided the training and distribution of fishing boats and tri-bikes to the residents.

It may be recalled that on Dec. 18, 2008, the Supreme Court issued a Continuing  Mandamus  on  Manila  Bay  (G.R. 171947-48)  directing  13  government agencies to clean up, rehabilitate, and preserve Manila Bay, and restore and maintain its waters to class “B” level to make them fit  for swimming, sky-driving and other forms  of  contact recreation.  The  13 agencies involved are:

Among those who also received the Manila Bay Awards were:

Also recognized during the event are the: Villar SIPAG Foundation, Wild Bird Club, Asian Terminal Inc., Brgy. 412 in Sampaloc, Manila, environmental planner Jason Villeza, the “river rangers” of Bacoor City, Cavite City, and the municipalities of Naic, Kawit, and Noveleta in the province of Cavite.

Among the LGUs includes: Balanga Bataan; Palayan, Nueva Ecija; Sasmuan Pampanga; Marilao Bulacan and the Environment and Natural Resources Office of the Provincial Government of Pampanga.