The Philippines continues to be among the laggards in East Asia in attracting more foreign direct investments (FDI). Data from the UN Conference on Trade and Development (UNCTAD) World Investment Report (WIR) show that our FDI inward stock, an indicator of cumulative foreign investments, was still below $90 billion in 2018 and only about 55% of that in Vietnam and Malaysia, 37% of that in Thailand. The only neighbors that we can “beat” as having lower FDI stocks are Myanmar, Cambodia, Laos, and Brunei (see Table). 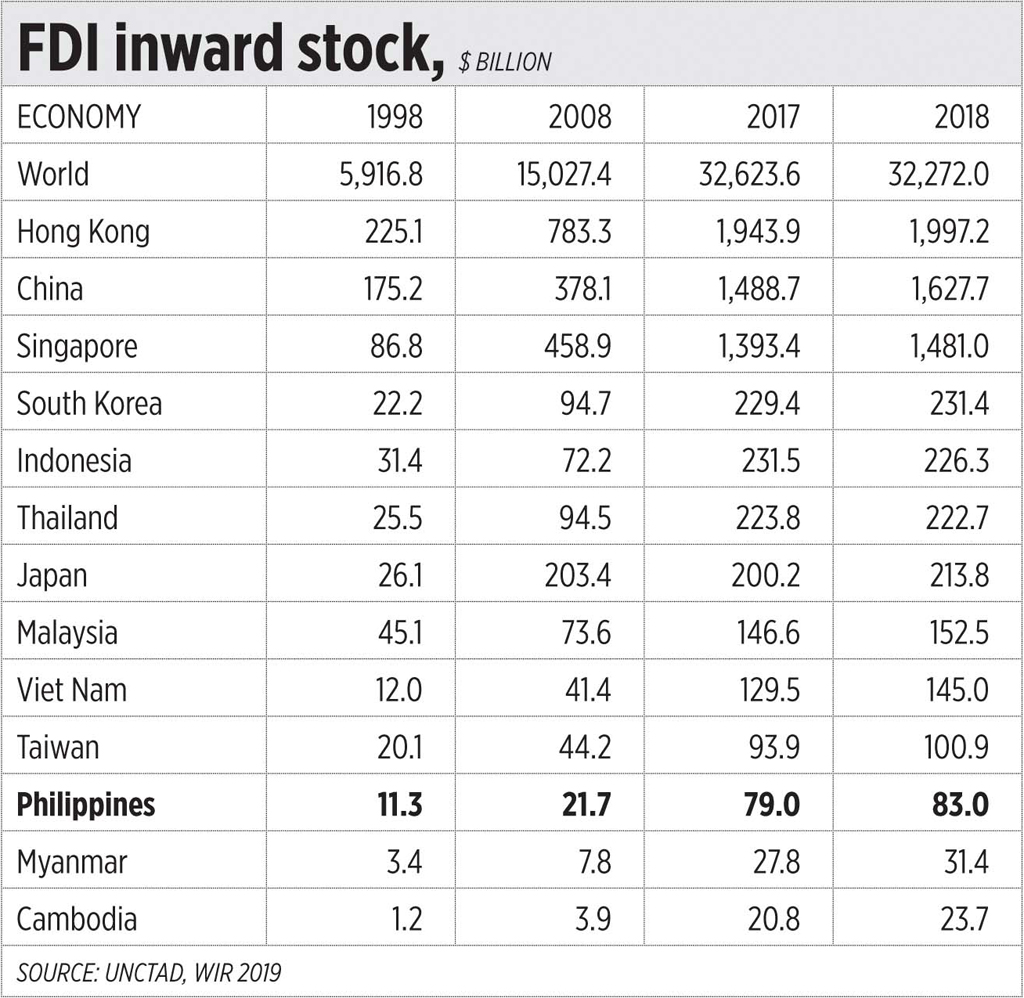 Japan is not a major destination of FDI mainly because it is a major source or exporter of investments. And an important reason for the Philippines’ low attractiveness to FDI is the Constitutional restrictions, if not prohibitions, for foreign equity in many sectors and sub-sectors of the economy.

The Chairman of the AmCham Legislative Committee, John Forbes, provided a good overview on why this measure is important for the Philippine economy and why the existing law, the PSA — which was enacted in 1936 (it is 84 years old) — is a hurdle to more investment liberalization and job creation.

As a regular traveller to Negros Occidental (my home province) and Iloilo (my wife’s province) at least once a year, by plane or driving by land and RORO (roll on roll off boats), I am particularly interested to see more airline competition, at least more flights by each of the three existing airlines flying to these big islands and provinces. I am also interested to see more shipping competition among boats plying the Batangas-Mindoro or Batangas-Aklan, Manila-Iloilo routes. PSA liberalization is among the few good bills in Congress.

That same week, the Philippine Competition Commission (PCC) also organized a “Forum on Competition in Developing Countries” on Jan. 30-31 at Sofitel Philippine Plaza. I attended only Day 2 and there were two key speakers, Senator Sherwin Gatchalian, then Dr. Ioannis Kokkoris, Professor of Competition Law and Economics and Dean for International for the Faculty of Humanities and Social Sciences, Queen Mary University of London, UK.

I have discussed the speech of Mr. Gatchalian in my previous column (see https://www.bworldonline.com/power-security-and-competition/). Dr. Kokkoris’ lecture I found too general and a reiteration of what many people in the audience would probably understand and advocate. Like the advantages of a competitive market over a monopoly/oligopoly market structure.

There were five reactors to his talk and all were highly knowledgeable on competition issues: Department of Trade and Industry Undersecretary for Competitiveness and Innovation Group, Rafaelita Aldaba; World Bank Senior Economist Graciela Miralles Murciego; RCBC Executive Vice-President Lito Villanueva; Indonesia Competition Commission’s Mochammad Hendry Setyawan; and University of Hong Kong’s Professor Thomas Cheng. They all have contributed specific observations on the progress or limitations of competition in their respective areas and economies. Thanks to the PCC for organizing such a big international forum.

A weird thing in the country now is the insistence by the Department of Health (DoH) to impose another round of drug price controls. Price and brand competition is healthy for the companies, patients, hospitals, and physicians. People are given choices whether to buy more expensive but well-known and effective brands or cheaper but lesser well-known brands and generics.

Forcing price controls — removing the higher prices for certain brands — will narrow the choices and competition to medium- to lower-price ranges. Then better-known disease-killer brands will be discouraged from selling while those that are already selling cheap will be forced to sell even cheaper and face possible bankruptcy.