There are five important and unprecedented trends in the proposed National Government budget for 2022 that were not present in 2021 and previous years.

One, the budget will reach P5 trillion. When there is fiscal responsibility, this should also require P5 trillion of taxes, fees, and other revenues without resorting to new borrowings.

Two, allocations to local government units (LGUs) will reach P1.1 trillion. The Mandanas ruling affirmed by the Supreme Court and to be implemented in 2022 mandates that the internal revenue allotment (IRA) of LGUs should be based on total tax revenues of the National Government and not just collections by the Bureau of Internal Revenue.

Three, the budgets of some departments keep rising even if they should devolve more functions to the LGUs. These include the Departments of Education, Health, and Social Welfare and Development.

Four, outstanding public debt will reach P13.4 trillion. This is due to high borrowings of P2+ trillion a year since 2020 and big decline in revenues due to prolonged indefinite lockdown. Interest payments alone for the huge government borrowings were P532 billion in 2021 and P513 billion in 2022.

Five, government personnel services and pensions are to reach P1.4 trillion. From 2021, the Pension and Gratuity Fund were created separately from personnel services and these pensions, separation benefits have reached P232 billion in 2022. Government salaries, allowances and bonuses including non-essential bureaus continued despite many business closures (see Table 1). 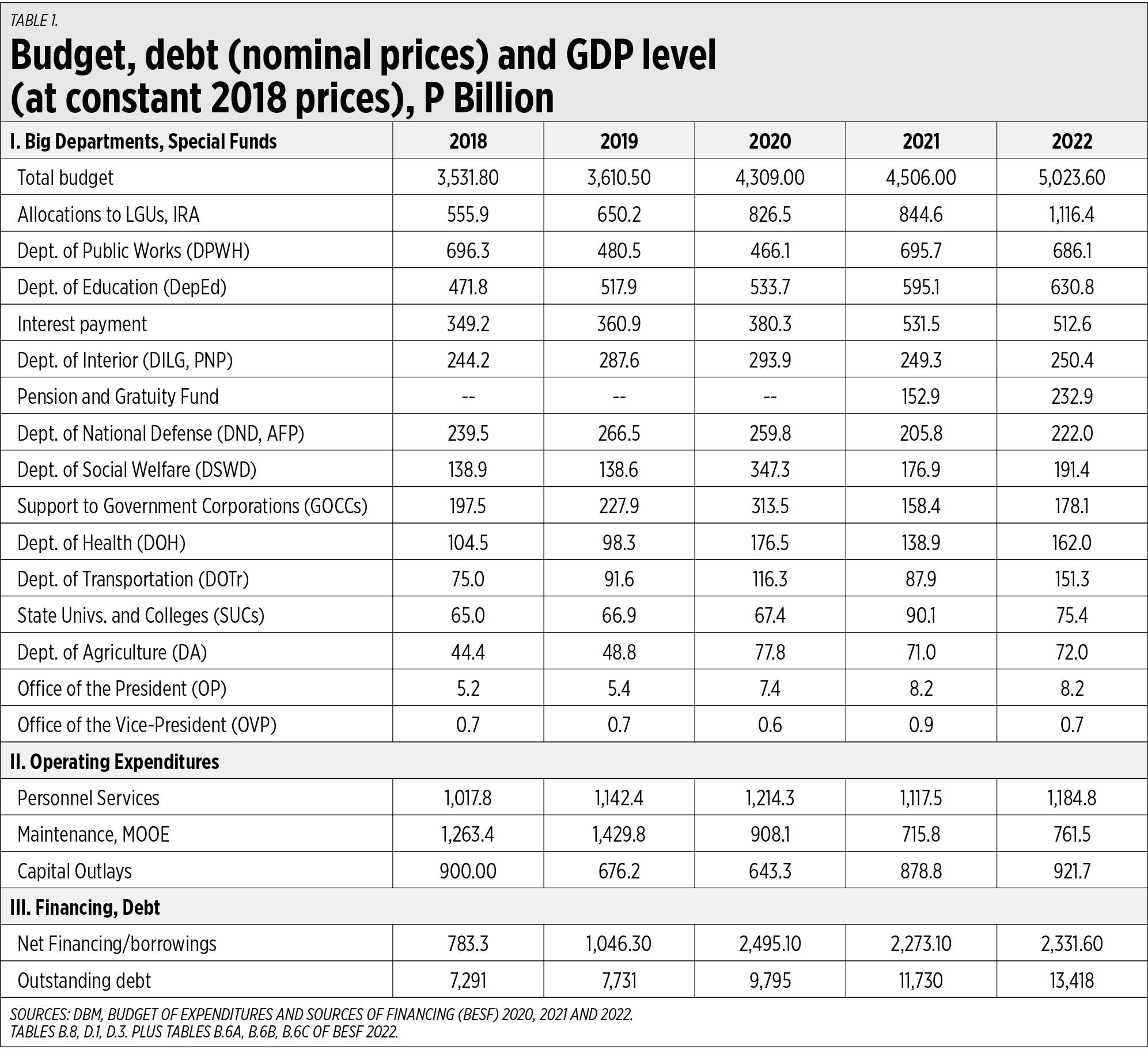 On Monday, Sept. 6, the House Committee on Good Government and Public Accountability was to discuss House Resolution (HR) No. 2075, “Urging the House Committee on Good Government to Conduct an Inquiry, in Aid of Legislation, on the Qualifications, Research Methodologies, Partnerships, and Composition of OCTA Research Philippines.” The HR was authored by Representatives Bernadette Herrera Dy, Kristine Singson-Meehan, Sharon Garin, Stella Luz Quimbo, and Bong Suntay.

I received a formal invitation to be one of the speakers from the Committee Chairman, Representative Michael Edgar Aglipay. Since Dr. Benigno “Iggy” Agbayani was also invited and we are both members of the Concerned Doctors and Citizens of the Philippines (CDC PH), I informed Mr. Aglipay that I would not present and I sent my input and research to Doc Iggy and he will present our joint paper.

Among the data that Doc Iggy and I submitted to the Committee were the economic damage of indefinite, hard, “circuit breaker” lockdowns that OCTA has been advocating and are music to the ears of Inter-Agency Task Force for the Management of Emerging Infectious Diseases (IATF) officials.

The actual GDP level, the flow of goods and services in a year or in a quarter — not just GDP percentage growth or contraction — are as follows:

In “circuit breaker 2” hard lockdown that OCTA announced on July 27 and implemented by the IATF in early August, the range of cases was 6,000 to 22,000 a day, an average of about 13,000 a day, twice the July 27 level of 7,000. Palpak na naman sila OCTA and IATF (OCTA and IATF bungled it again). More proof that hard lockdowns do not work and OCTA was using and announcing false predictions.

While OCTA may have good math models in computing the reproduction number R naught (R0) and related statistics, OCTA has a bad understanding about the virus. Viruses are not static and have properties of natural mutation into other variants.

OCTA and its followers in government should shut up about the false predictions and step back on hard lockdown policies. We have had lockdowns for 18 months straight already, have mass vaccination and vax discrimination policies, and still infection rates and daily cases are rising, not declining.

Europe’s blackout economics and the Philippines’ path to brownouts