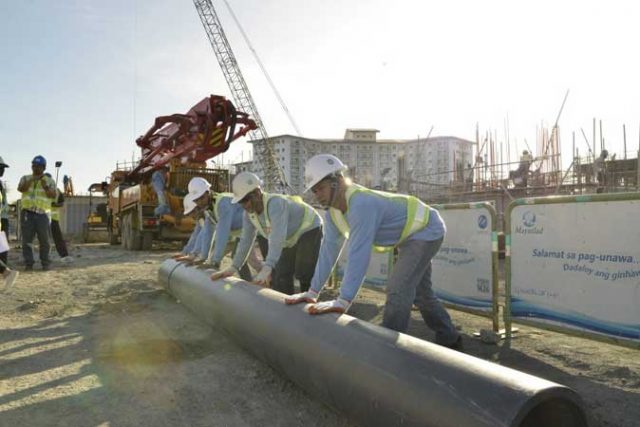 Maynilad Water Services Inc., the water supplier for Metro Manila’s west zone, has agreed to go public, as part of its revised concession deal with the government

“First, we are not listed. So we have to become a listed company. Secondly, we have concession loan from JICA (Japan International Cooperation Agency) which has very favorable terms, and we have about P4 billion of that credit line,” he said during the MPIC stockholder’s meeting on Friday.

“Finally, we will have the ability to tailor the business plan that was agreed upon in 2018,” Mr. Lim added.

Maynilad signed the agreement with the Metropolitan Waterworks and Sewerage System (MWSS) on May 18.  The deal removed what President Rodrigo R. Duterte called “onerous provisions,” such as the non-interference clause and its ability to charge corporate income tax to consumers.

Under the deal, Maynilad’s concession period would continue for 15 years, or from 2022 to 2037. Maynilad agreed to freeze tariffs until Dec. 31, 2022, and to remove corporate income tax from among its recoverable expenditures as well as the foreign currency differential adjustment.

Maynilad also agreed to cap the annual inflation factor to two-thirds of the consumer price index, and impose rate caps for water and sewerage services to 1.3x and 1.5x, respectively, of the previous standard rate.

Like Manila Water, Maynilad agreed to the “removal from the Republic of the Philippines’ (RoP) Letter of Undertaking of the non-interference of the Government in the rate-setting process, and the limitation of the RoP’s financial guarantees to cover only those loans and contracts that are existing as of the signing of the RCA.”

Maynilad will also forego the collection P3.4 billion in compensation from the government. In 2017, the Permanent Court of Arbitration in Singapore ordered the Philippine government to pay for the losses incurred by the company due to its failure to approve water rate adjustments.

The company also agreed to retain the rate rebasing mechanism where “the rates for the provision of water and wastewater services will be set at a level that will allow Maynilad to recover, over the term of the concession, expenditures efficiently and prudently incurred and to earn a reasonable rate of return.”

MPIC is one of three Philippine units of Hong Kong-based First Pacific Co. Ltd., the others being Philex Mining Corp. and PLDT, Inc.

Hastings Holdings, Inc., a unit of PLDT Beneficial Trust Fund subsidiary MediaQuest Holdings, Inc., has an interest in BusinessWorld through the Philippine Star Group, which it controls.  — J.P.Ibañez

Honda positive on hatchback model, but aligns with industry forecast