INFLATION may have slightly picked up in October due to a rise in food prices and transport costs, as well as the impact of base effects.

A poll of 15 economists by BusinessWorld last week yielded a median estimate of 2.4%, close to the higher end of the 1.9-2.7% forecast given by the Bangko Sentral ng Pilipinas (BSP) and well within the 2-4% target this year.

If realized, the median estimate will be a tad faster than 2.3% in September and 0.9% in October 2019. The BSP’s latest average inflation forecast for this year is at 2.3% 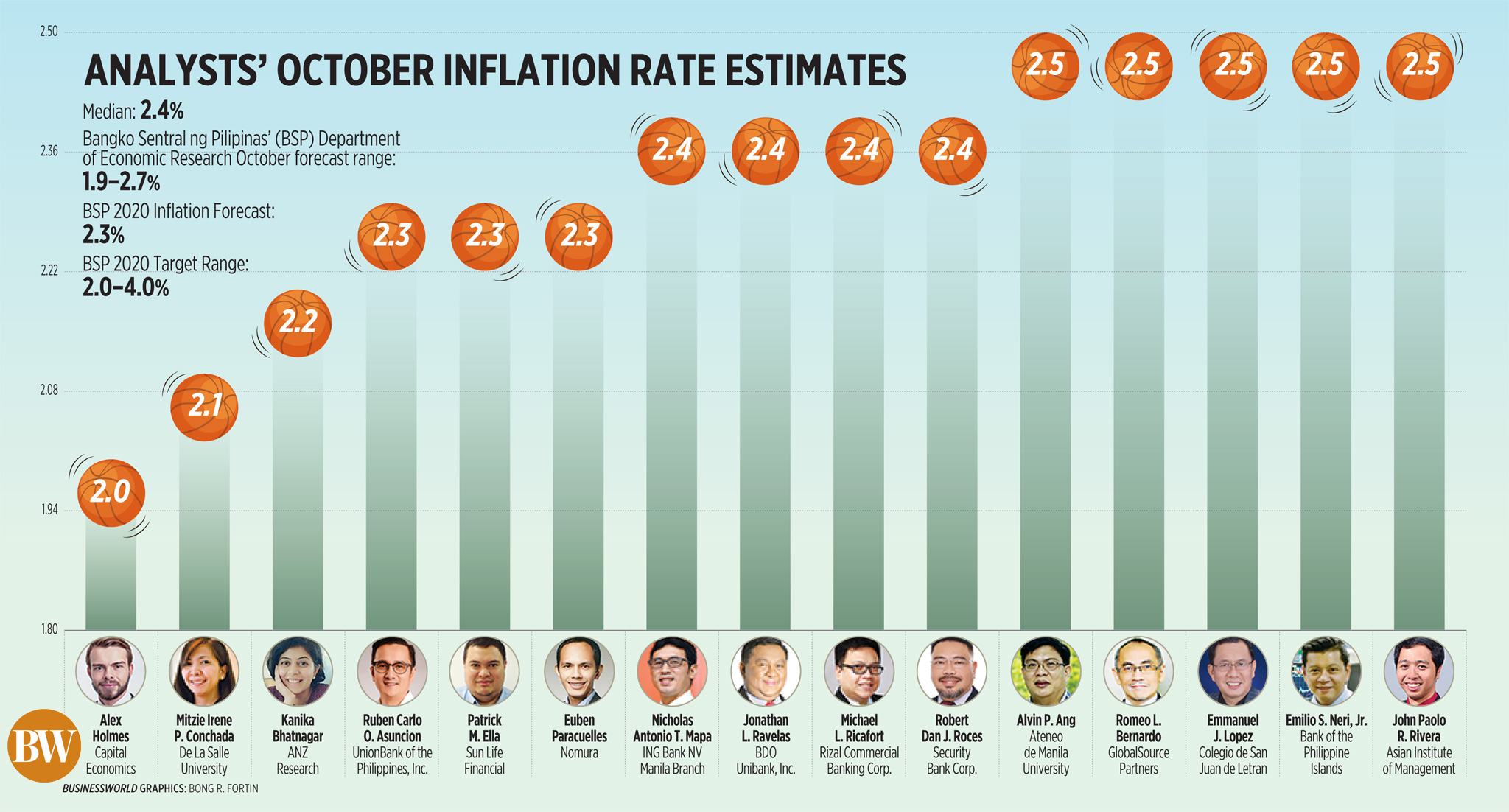 Analysts said upside risks from higher prices of some food groups might have caused inflation to slightly quicken last month.

“The recent typhoons could affect the uptick of prices of some commodities such as vegetables. Prices of meat items such as pork and chicken remain high due to limited supply,” said Mitzi Irene P. Conchada, an economist from De La Salle University Manila.

An uptick in fares and transport costs may have also contributed to faster inflation in October as travel restrictions were eased and more economic activities restarted, analysts said.

He added that higher electricity rates in areas served by Manila Electric. Co. (Meralco) could be another upside risk to inflation. October power rates rose by P0.1212 per kilowatt-hour (kWh) to P8.55 per kWh from the previous month, Meralco said.

Other factors such as base effects and education expenses in October may have also led to quicker inflation, said ING Bank N.V. Manila Senior Economist Nicholas Antonio T. Mapa.

But a slightly faster inflation will not be enough to compel the central bank to further cut rates, according to analysts.

The economy shrank by a record 16.5% in the second quarter as it succumbed to the impact of the tight lockdown during the period.

While a less steeper GDP contraction is expected in the third quarter as the economy gradually reopened, the government estimates GDP to fall by 4.5% to 6.6% this year. The official third-quarter GDP data will be released on Nov. 10.

Meanwhile, Alex Holmes, an economist from Capital Economics, expects the third-quarter growth data to underwhelm, adding that the BSP may be “too upbeat” on its economic outlook.

“We continue to expect another cut by the BSP before the end of the year. Just a 25-bp (basis point) cut, taking the policy rate down to 2%,” Mr. Holmes said.

The Monetary Board will hold its policy setting on Nov. 19, before its final meeting for the year on Dec. 17.

The BSP has slashed key policy rates by 175 bps this year to support the economy amid the pandemic. This has brought down the overnight reverse repurchase, lending, and deposit facilities to record lows of 2.25%, 2.75%, and 1.75%, respectively.

While the policy-setting body has opted for a “prudent pause” in its August and October meetings, BSP Governor Benjamin E. Diokno has said that the central bank continues to have room for further easing when the need arises. He said this would allow previous actions to be fully absorbed by the financial system.

Mr. Diokno has also said they would carefully assess the timing to unwind aggressive policy measures done in light of the crisis to prevent serious repercussions on the economy.

Peso down ahead of Fed, BSP meetings