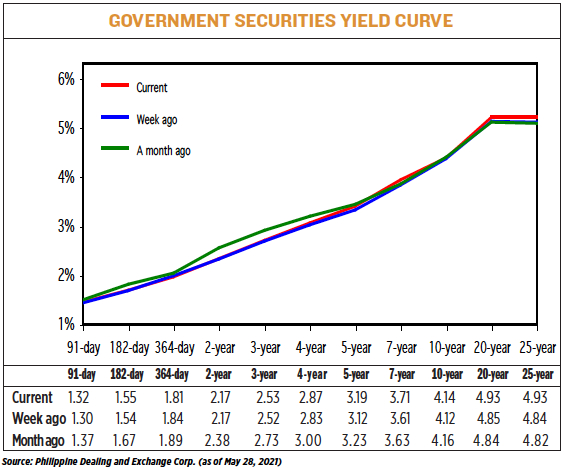 YIELDS ON government securities (GS) at the secondary market went up last week as players were optimistic on the loosening of lockdown restrictions for next month, as well as the passage of a new economic stimulus measure amid the ongoing coronavirus pandemic.

GS yields, which move opposite to prices, rose by 3.75 basis points (bps) on average week on week, based on PHP Bloomberg Valuation Service Reference Rates as of May 28 published on the Philippine Dealing System’s website.

“Yields increased on the average over the week amid hopes of looser quarantine restrictions for June 2021 and investor optimism towards the eventual passage of the Bayanihan III stimulus bill. This movement was likewise supported by news about the central bank’s approval of the implementing guidelines of the FIST (Financial Institutions Strategic Transfer) Law,” a bond trader said in an e-mail.

“As all these developments are pointing to assist the gradual recovery of the domestic economy and the sudden rally in the equity markets, investors have shifted away from fixed-income securities toward riskier asset classes such as equities. Ultimately, these have exerted upward pressure on local bond yields,” the bond trader added.

The House of Representatives on Tuesday approved on second reading House Bill No. 9411 or the Bayanihan to Arise as One Act (Bayanihan III). The measure will be tackled by the House on third and final reading this week.

Bayanihan III is a proposed economic stimulus measure that aims to drive recovery through support for pandemic-hit businesses and families. The stimulus fund was adjusted to P401 billion from the initially proposed P405.6 billion.

The main feature of the bill is the “Ayuda (aid) for All” which will provide P2,000 for all Filipinos regardless of social status, given out in two tranches.”

Meanwhile, the FIST Law (Republic Act 11523) allows credit-granting institutions to clean their balance sheets by selling their NPAs to asset management companies called FIST corporations that are registered with the Securities and Exchange Commission. It was signed into law in February, with its implementing rules and regulations being approved by the Bangko Sentral ng Pilipinas (BSP) on May 20.

In a separate e-mail, ATRAM Trust Corp. Head of Fixed Income Jose Miguel B. Liboro attributed last week’s yield movements to the Bureau of the Treasury’s borrowing program for June.

“Given the increase in bond supply (four auctions instead of two in June) and the focus on the belly (five- and seven-year) and long-end (10- and 20-year) of the curve, we saw investors pare down positions causing yields to adjust higher after the news,” Mr. Liboro said.

The BTr is planning to raise P215 billion from the local bond market in June, bigger than the P170-billion program for April and May.

The Treasury will offer P15 billion in T-bills every Monday, totaling P75 billion for the whole month.

Meanwhile, it is looking to raise P140 billion via T-bonds in weekly Tuesday auctions. It will offer P35 billion each in 20-, 7-, 10-, and 5-year debt papers during the month.

“Interestingly, the portion of the [yield] curve which adjusted the most (higher) was the [seven-year tenor]. We expect it to adjust lower gradually from these levels and for the yield curve to steepen — with yields on the 10- and 20-year tenors adjusting higher,” Mr. Liboro said.

“While yields are unlikely to adjust back towards the highs seen in March, we expect the yield curve to steepen throughout the third quarter,“ he added.

“Government bond yields might move with a downward bias [this] week from easing domestic inflation concerns after the BSP revised down its full-year inflation forecast during the latest Monetary Board meeting,” the bond trader said.

The BSP held its key interest rate at a record low for a fourth straight meeting on May 12 as it continues to support the economy’s recovery from the pandemic.

At the same time, it lowered its inflation outlook this year to 3.9%, from a previous estimate of 4.2%.  This will put inflation back within the BSP’s 2-4% annual target. On the other hand, the forecast for 2022 was raised to 3% from 2.8% previously.

The Philippines remains in a recession after gross domestic product (GDP) fell by an annual 4.2% in the first quarter.

The worse-than-expected first-quarter GDP contraction, coupled with the spike in COVID-19 cases and lockdown restrictions in late March to April, prompted the country’s economic managers to slash its growth targets to 6-7% from 6.5-7.5% penciled in last December 2020. — Lourdes O. Pilar

Yields increase on May inflation print