NET INFLOWS of foreign direct investments (FDIs) increased 64% in May, as investors adopted a wait-and-see attitude after the presidential elections.

Data released by the Bangko Sentral ng Pilipinas (BSP) on Wednesday showed that FDI net inflows surged to $742 million in May from $452 million in the same month in 2021. 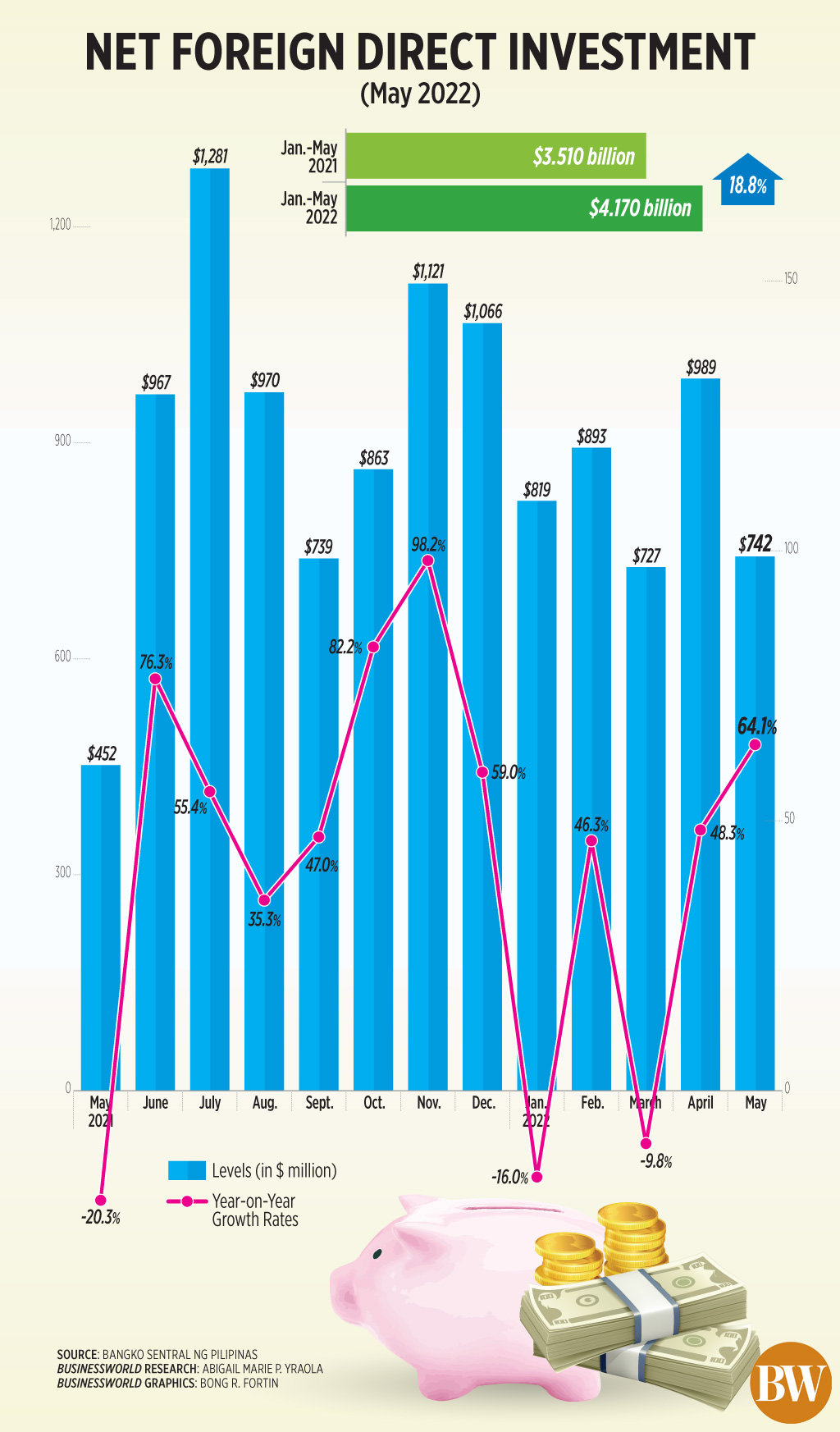 The net FDI inflows in May was the lowest level in two months, or since the $727 million in March.

“The year-to-date growth was mainly on account of the increase in non-residents’ net investments in debt instruments, which muted the decline in net equity capital placements (other than reinvestment of earnings),” the BSP said in a statement.

In an e-mail note, Rizal Commercial Banking Corp. Chief Economist Michael L. Ricafort said the May FDI net inflows was “the lowest in two months or since March 2022 amid some wait-and-see stance while waiting for the outcome of the May 2022 presidential elections, but still among pre-pandemic highs.”

The Philippines conducted its national elections on May 9. President Ferdinand R. Marcos, Jr. and his running mate Vice-President Sara Duterte-Carpio, won by a landslide.

Despite the month-on-month slump in FDIs, this was the fastest growth in monthly FDI inflows since the 98.2% surge in November last year.

“The pickup in FDI reflects the improving sentiment from reopening theme, which continued to play out nicely and supported the recovery,” Security Bank Corp. Chief Economist Robert Dan J. Roces said in a Viber message.

Metro Manila and most areas in the country have been under the most lenient alert level since March, as coronavirus infections declined.

The share of capital formation, the investment component of the economy, eased to 20.5% in the second quarter from 83.7% last year.

“FDI contributed to this as the money that is invested is spent to create economic activity to form physical capital,” Mr. Roces said.

BSP data showed non-residents’ net investments in debt instruments of local affiliates jumped by 93% to $544 million in May, from $282 million a year ago.

Also, investments in equity and investment fund shares rose by 16% in May to $197 million.

Non-residents’ net investments in equity capital (other than reinvestment of earnings) grew by 47.8% to $91 million from $61 million in the same month last year. Equity capital placements up by 25.1% to $104 million, while withdrawals dropped by 40.5% to $13 million.

The equity placements were mainly from Japan, the United States, Singapore and the Netherlands, and invested mostly in manufacturing, real estate, information and communication, and transportation industries.

Reinvestment of earnings slipped by 2% to $106 million year on year in May.

For the first five months of the year, total FDI net inflows grew by 18.8% to $4.2 billion from the $3.5 billion net inflows posted in the same period last year.

Reinvestment of earnings inched up by 0.2% to $435 million in the January to May period.

Net inflows of FDIs are expected to slow in the next few months, amid external headwinds.

“Compared with other emerging economies, the Philippine economy remains to be one of the fastest growing economies,” China Banking Corp. Chief Economist Domini S. Velasquez said in a Viber message.

“External headwinds such as potential slowdown in advanced economies can eventually temper the rise of FDI, however, for the year, most of these economies are still growing above their potential output and businesses would have the capacity to invest in emerging economies such as the Philippines,” she added.

Ms. Velasquez also said specific investment priorities should be laid out by the new administration.

“With mobility restrictions still down, FDI may still continue to play a role in propping up the recovery in the quarters ahead,” Mr. Roces said.

May inflation likely surged past 5%