AGRICULTURAL production continued to contract for a second straight quarter, mainly due to lower crops and fisheries output, the Philippine Statistics Authority (PSA) said on Monday.

PSA data showed the value of production in agriculture and fisheries at constant 2018 prices declined 0.6% in the April to June period, worsening from the 0.3% contraction in the first quarter.

However, the pace of contraction slowed from the -1.5% logged in the second quarter of 2021. 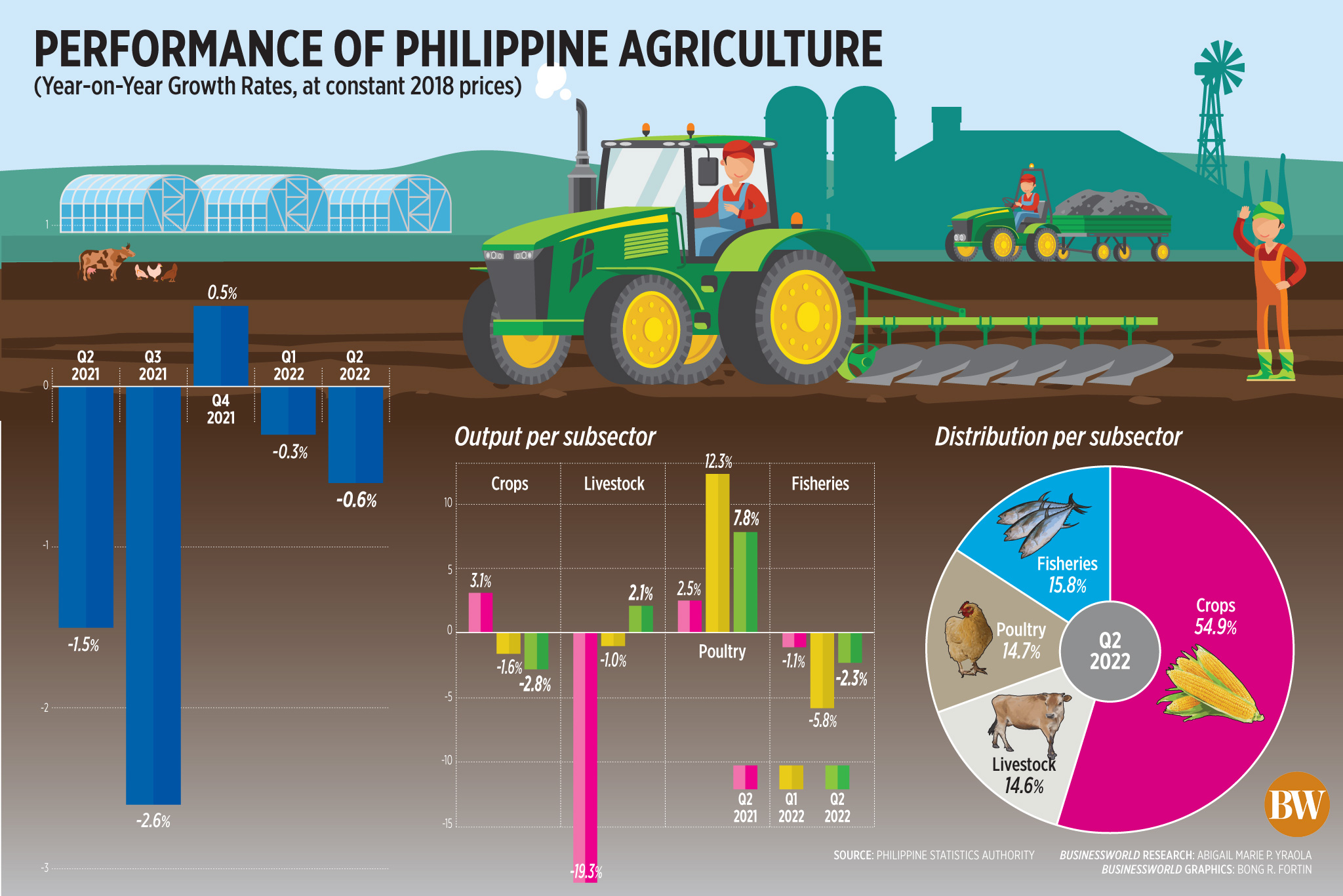 At current prices, the value of production in agriculture and fisheries jumped 6.2% year on year to P532.79 billion.

For the six-month period, the value of production in agriculture and fisheries at constant 2018 prices registered a 0.4% decline.

Crops, which make up about 55% of the sector’s overall production, declined 2.8%, while fisheries output fell 2.3% in the second quarter.

On the other hand, livestock production rose 2.1%, and poultry expanded 7.8%.

“Crops and fisheries in particular have been faring poorly. Palay (unmilled rice) output value and also volume declined despite the billions poured into the sector. The only bright side has been livestock and poultry but they are still in recovery mode and below 2020 levels,” he said in a Viber message.

“The industry is a heavy user of diesel to run the tractors and trucks for hauling and irrigation,” he said in a Viber message.

Mr. Lamata said the cost of fertilizer is now at P4,000 per sack, from P700 per sack before the pandemic.

Oil prices have soared this year amid tight global supply and the Russia-Ukraine war. As of Aug. 2, diesel prices have increased by P32.35 per liter year to date.

At current prices, the value of crop production slipped by 0.1% to P265.98 billion from the previous year’s record.

For the first six months, the value of fisheries production slumped by 3.9%.

The value of fisheries production at current prices grew by 15.4% to P92.59 billion in the second quarter.

Tugon Kabuhayan Convenor Asis G. Perez, a former director of the Bureau of Fisheries and Aquatic Resources, said fisheries’ poor production was due to the lack of ample feed supply.

“In fisheries, I think that is attributable to the effect of our failure to have nutritious feeds. Even on the ground, there are reports that growing fish has slowed in the absence of appropriate ingredients,” he said in a virtual briefing on Monday.

“We’ve heard reports as far as Mindanao saying that the fish they are raising are not growing. The growth of fish, particularly in aquaculture, has seen some slowdown,” he added.

BRIGHT SPOTS
Meanwhile, the poultry sector remained a bright spot as production grew 7.8% in the April to June period, better than the 2.5% expansion in the second quarter of 2021. The value of poultry production rose 10% in the first semester.

“The data may be misleading as it was compared to the COVID-19 period last year,” United Broiler Raisers Association President Elias Jose M. Inciong said in a Viber message.

“Also, the growth may be temporary as the industry will adjust to the arrival of imports which has seen a recent surge in arrivals and in frozen inventories. As such, any conversation about improving the numbers is futile,” he added.

In March, the Department of Agriculture suspended the movement of domestic and captured wild birds and poultry products due to the avian influenza or bird flu outbreak.

At current prices, the value of poultry hit P79.79 billion, or an increase of 13.8% from the previous year.

Livestock production expanded 2.1% in the second quarter, a turnaround from the 19.3% drop in the same period in 2021. This helped bring first-half production 0.6% higher.

The value of livestock production at current prices jumped 10.7% at P94.43 billion.

Mr. Montemayor said the Agriculture department must re-evaluate its current programs and policies.

“We could blame the COVID-19 pandemic, high fertilizer and fuel prices, but we also need to thoroughly evaluate the government’s programs and strategies to see if they are working and cost effective,” he added.

“It’s not yet over but we can start to plan rushing in the needed ingredients and catch up. We need to catch up to make up for losses by the next season,” he said in a virtual briefing.