THE PHILIPPINES climbed four spots in an annual global competitiveness report by Switzerland-based International Institute for Management Development (IMD), due to the economy’s improved performance.

IMD’s 2022 World Competitiveness Yearbook ranked the Philippines 48th out of 63 economies, from the 52nd spot out of 64 economies in 2021. This was the Philippines’ highest ranking in two years or since placing 45th in 2020.

However, the country continued to lag behind its neighbors, placing 13th among the 14 Asia-Pacific economies in the index for the fifth straight year. 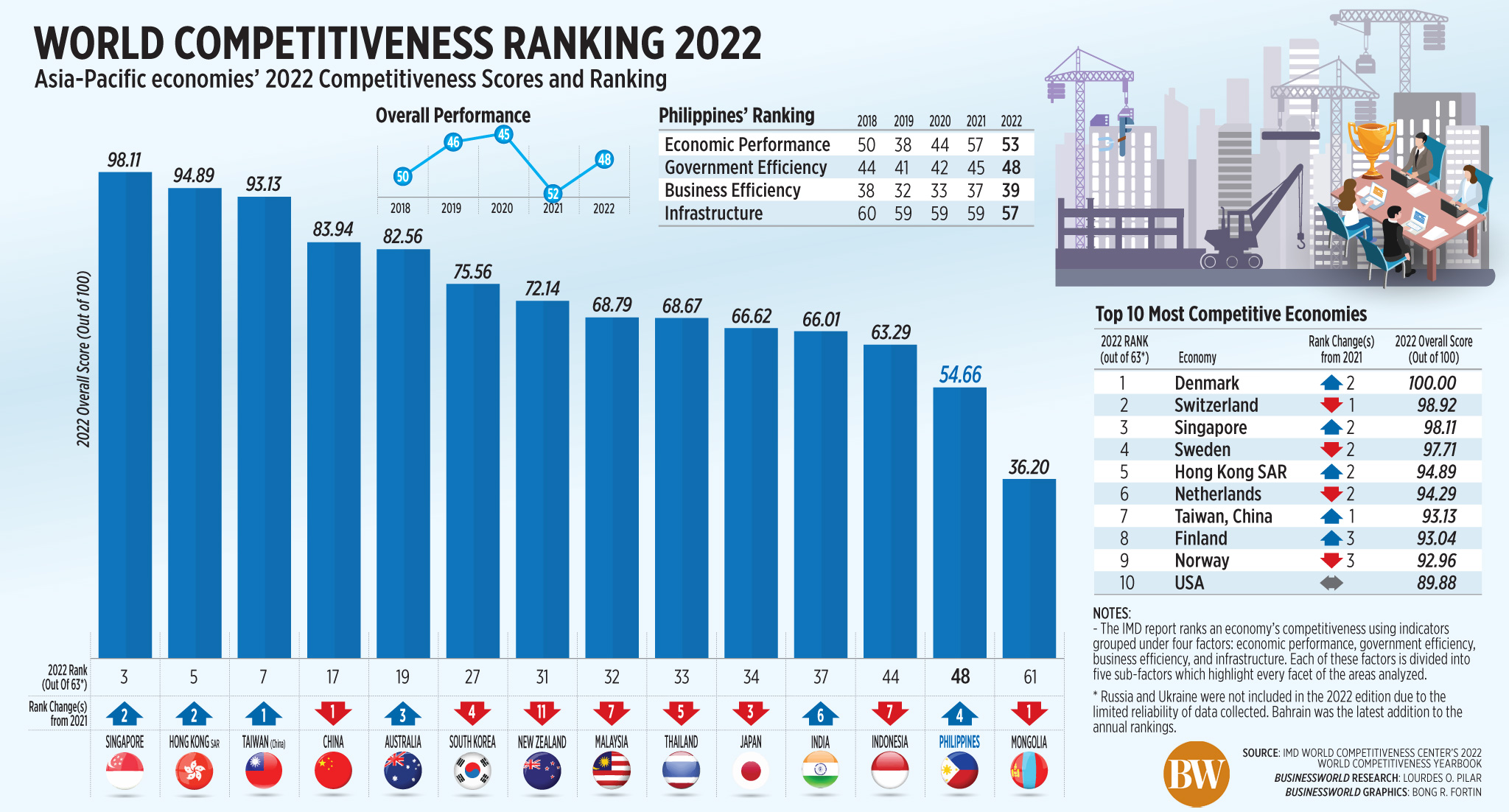 “The Philippines saw improvements in its Economic Performance, wherein the country currently ranks at 53rd, a jump from 57th in 2021,” the Asian Institute of Management (AIM) Rizalino S. Navarro Policy Center for Competitiveness said in a statement. The center has been the IMD’s Philippine partner institute in producing the competitiveness yearbook since 1997.

While infrastructure ranking rose two places to 57th spot, it is still the lowest among the competitiveness factors for the Philippines, particularly in terms of health and education infrastructure.

However, the Philippines slid to 48th in terms of government efficiency from 45th in 2021, due to the decline in public finance to 51st from 45th in 2021. This was mainly due to the deterioration of the budget deficit and outstanding debt as the government ramped up spending and borrowings to finance its coronavirus disease 2019 (COVID-19) pandemic response.

The budget deficit stood at P311.9 billion as of end-April, while outstanding debt rose to a record P12.76 trillion.

The Philippines also saw a drop in business efficiency, slipping to 39th from 37th last year, as productivity and efficiency declined six spots to 56th place. Overall productivity plunged to 57th place in this year’s ranking, from 10th in 2021, which IMD said reflected the negative impact of the COVID-19 pandemic.

IMD said the Philippines will continue to face challenges this year, such as implementing effective strategies to drive recovery from the pandemic while strengthening fiscal responsibility and reducing poverty.

The country also needs to promote “innovative governance” and ensure smooth post-election transition of power, as well as develop “future-ready” health and education systems. It also has to invest in sustainable infrastructure and reduce climate change vulnerability, the IMD said.

University of Asia and the Pacific (UA&P) Senior Economist Cid L. Terosa said in an e-mail interview with BusinessWorld that the country’s improved ranking sends a positive signal to potential investors.

“The ranking of the Philippines improved because of its better economic performance and improved state of infrastructure. In particular, increasing real GDP growth, higher gross capital formation, evident macroeconomic stability, and greater employment creation propelled the Philippines to a higher ranking,” he said.

Foundation for Economic Freedom (FEF) President Calixto V. Chikiamco in a mobile phone message attributed the higher ranking to the government’s better handling of the pandemic, fiscal management, strong foreign exchange reserves, and the continuing attractiveness of its workforce.

European Chamber of Commerce of the Philippines (ECCP) President Lars Wittig said in a mobile phone message that businessmen keep a close eye on these international benchmarks since they provide “a snapshot of the economic health of the country which guide business and investment decisions.”

“The ECCP recognizes substantive benefits of the government’s recent milestones that will further drive global competitiveness and economic development. This includes the amendments to the Public Service Act (PSA), Foreign Investment Act (FIA) and Retail Trade Liberalization Act (RTLA) which will make the Philippines a more attractive destination for trade and investments,” he added.

“The country’s improved ranking may have to do with the further reopening of the economy towards greater normalcy after some pockets of hard lockdowns and other restrictions last year. This increased economic/business activities in the country, allowed many businesses/industries to reopen again, operate at higher capacity, hire more workers, book more sales and income, thereby fundamentally leading to better economic recovery prospects,” Mr. Ricafort said.

Mr. Marcos is set to take his oath of office on June 30.

ECCP’s Mr. Wittig said that the incoming Marcos administration should build on the gains made by the previous administrations in order to improve the country’s competitiveness ranking.

“Building on the gains of the previous administrations is imperative to cushion socioeconomic shocks and advance recovery, coupled with the continued widespread deployment of the national vaccination program,” Mr. Wittig said.

“More sustainability-related reforms, investments in human resources (education, nutrition, wellness) as well as institutional reforms on good governance and transparency should also be in the front and center of policy priorities to improve the country’s ranking moving forward,” he added.

MOST COMPETITIVE
Denmark topped the competitiveness index, followed by Switzerland, Singapore, Sweden and Hong Kong. The rest of the top 10 included the Netherlands, Taiwan, Finland, Norway, and the United States.

Singapore had the highest competitiveness ranking among the Asia-Pacific economies, followed by Hong Kong, Taiwan, China, and Australia.

“Other global challenges having an impact on the competitiveness of countries include variants of COVID-19 appearing under different intensity with respect to the number of infected people around the world; differing national policies to address COVID (the ‘zero-tolerance COVID’ policy versus the ‘moving on from COVID’ policy); and the invasion of Ukraine by Russia,” Mr. Cabolis said.

The countries covered by the 2022 World Competitiveness ranking were different from the 2021 report after Bahrain was included while Russia and Ukraine were excluded in this year’s report because of the ongoing war.