THE PHILIPPINES jumped one spot to 54 out of 167 countries in a London-based think tank’s democracy index last year, as the coronavirus pandemic resulted in an “unprecedented withdrawal” of civil liberties in both developed democracies and authoritarian regimes.

Based on the Economist Intelligence Unit (EIU) Democracy Index 2021, the Philippines under President Rodrigo R. Duterte received a score of 6.62, an improvement from 6.56 in 2020.

The EIU classified the Philippines as a “flawed democracy,” along with nine other countries in Asia. 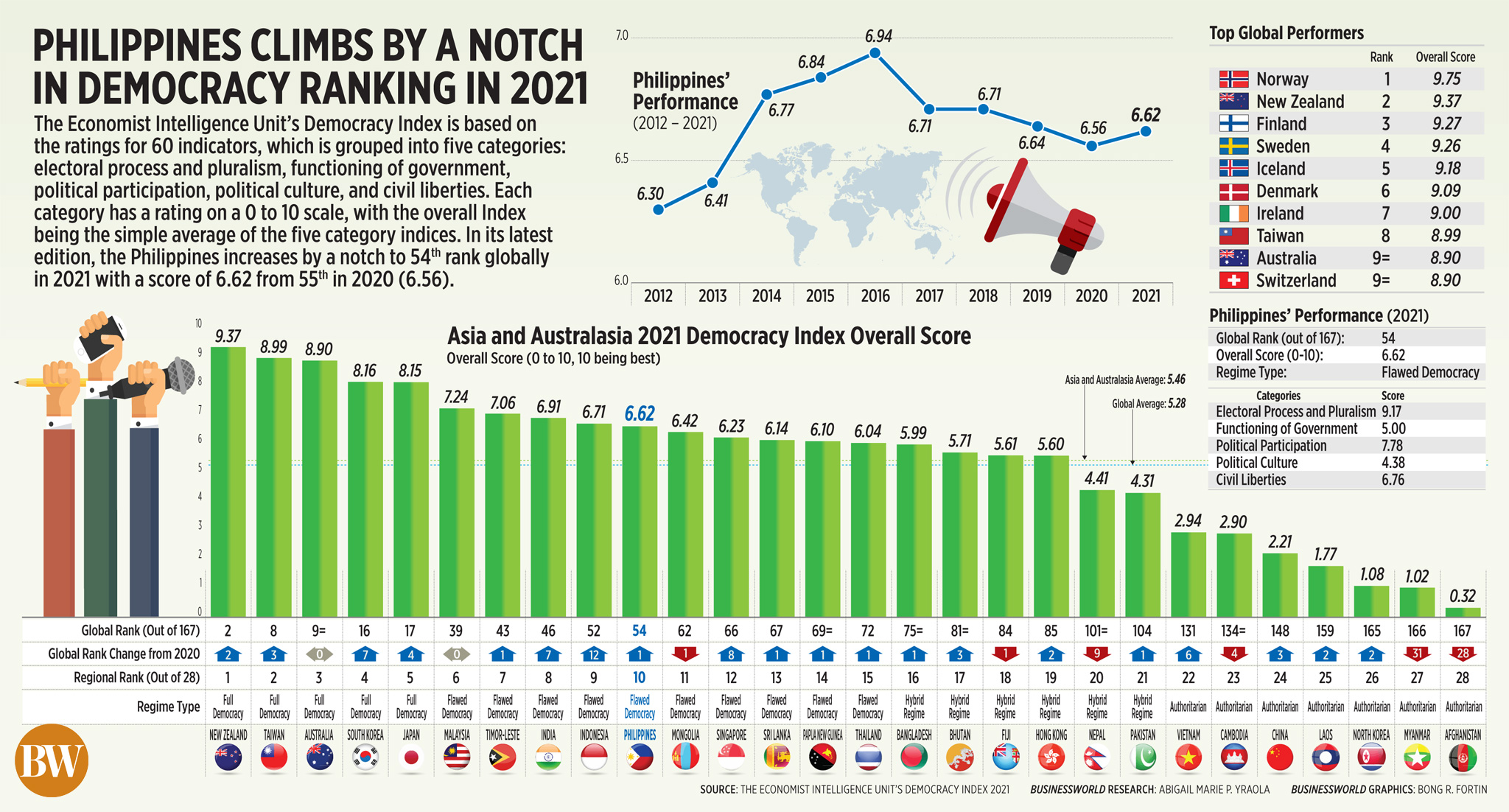 On the other hand, Afghanistan and Myanmar displaced North Korea at the bottom of the list.

The EIU said the pandemic has compounded many pre-pandemic threats to democracy, citing an increasingly technocratic approach to managing society in Western democracies and a tendency in many backward democracies and authoritarian regimes to resort to coercion.

Maria Ela L. Atienza, a political science professor at the University of the Philippines, said Philippine democracy has been weakened by “too much concentration of powers in the Executive branch” under the current administration.

“While not the only culprit, President Duterte and his administration have concentrated too much power in his office, threatening the rule of law and the independence of the Judiciary, relying too much on punitive measures and the powers of the military and the police, violating human rights and media freedom, and attacking those labeled as opposition,” she said in a Viber message.

Ms. Atienza said the government relied heavily on a militarist approach for its pandemic response.

“The response has also put the blame largely on people who violate the laws but at the same time, those quickly rounded up and punished are poor people who were affected heavily by the pandemic, community organizers and activists while rich people and administration allies who violate health protocols are given a lot of leeway,” she said.

The political analyst said the next administration needs to ensure that government officials and agencies are “accountable to the people and can be checked by other branches and sectors.”

DROP IN GLOBAL AVERAGE
The EIU said the global average score took a big hit for a second consecutive year, falling to 5.28 from 5.37 in 2020. This was the worst global score since the index first came out in 2006.

Less than half or 45.7% of the world’s population now live in a democracy of some sort, a significant decline from 49.4% in 2020, according to the report.

It said only 6.4% of the world’s population live in full democracies or countries that provide their citizens civil liberties and political freedoms as well as an effective government and political culture.

More than a third of the population live under authoritarian rule, many of them in China.

EIU said China is set to become the world’s largest economy by 2030, which may result in the spread of authoritarian rule around the world and a rollback of democracy globally.

Mr. Duterte led a foreign policy pivot to China and away from the US when he took office in 2016.

However, less than a year before he steps down, Mr. Duterte appears to have changed his tune. He has thanked US President Joseph R. Biden for donating coronavirus vaccines to the Philippines and restored a visiting forces agreement after suspending it for months.

UP’s Ms. Atienza said it would be difficult for the next government to continue Mr. Duterte’s foreign policy pivot to China since the majority of Filipinos have unfavorable attitudes towards the Chinese government.

“While China is an economic power, it has not been successful in forging greater people-to-people exchanges and interactions, though it is trying, compared with other powers that are able to establish strong linkages not only with national elite but with the people themselves,” she said.