THE BANGKO SENTRAL ng Pilipinas (BSP) is likely to keep its key interest rate steady as the economy gradually reopens despite a continued surge in coronavirus disease 2019 (COVID-19) infections.

A BusinessWorld poll held last week showed 17 out of 18 analysts expect the Monetary Board to hold the key policy rate at 2%, a historic low, on Sept. 23.

Analysts expect the central bank to look past the beyond-target inflation in order to support the economy’s recovery which has been stymied by the persistent rise in COVID-19 cases and lockdown restrictions. 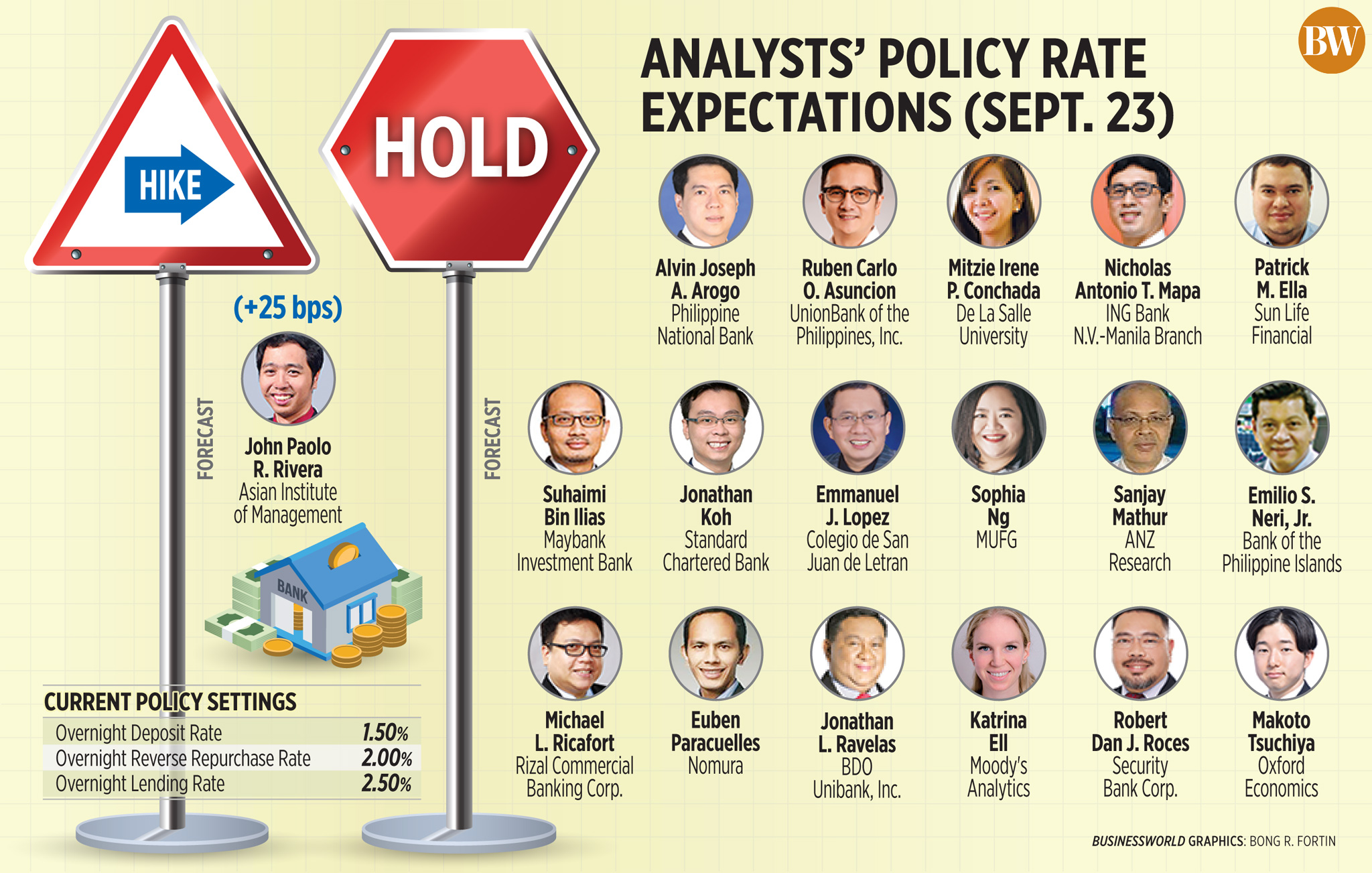 “I think BSP will still keep its key policy rates at its current level. It might take some time before a significant economic growth can occur due to high infection rate and limited economic activity,” said Mitzie Irene P. Conchada, an economist from the De La Salle University.

The economy exited recession in the second quarter after five consecutive quarters of contraction. Second-quarter gross domestic product (GDP) grew by 11.8% year on year, although it declined by 1.3% quarter on quarter.

“The BSP should continue to adopt accommodative policy to branch out appropriate stimulus in order to boost economic recovery by way of consumption and investment expenditures,” Mr. Lopez said.

At its previous policy meeting on Aug. 12, the Monetary Board has cited the need to retain policy support amid risks to recovery due to the virus surge and reimposed restriction measures.

Metro Manila was placed under a two-week strict lockdown in August in a bid to arrest the Delta-induced infection surge. This had prompted economic managers to lower its full-year growth target to 4-5% from 6-7% previously.

Restrictions have since been gradually eased under a new quarantine system. Metro Manila is currently at Alert Level 4 until end-September, but some businesses have been allowed to reopen under limited capacity.

“Authorities need to meticulously navigate an environment of slowing growth and higher prices. Monetary policy action at this point may not have a material and direct impact on the supply of fresh food nor the international price of crude oil,” ING Bank N.V. Manila Senior Economist Nicholas Antonio T. Mapa said.

Headline inflation quickened to 4.9% in August from 4% in July, mainly due to higher food and utility prices. Analysts blamed this on supply issues caused by lockdown restrictions as well as typhoons that sent food prices soaring.

August inflation was again beyond the BSP’s 2-4% target and was the fastest since the 5.1% in December 2018. Inflation in the first eight months stood at 4.4%, quicker than the 4.1% average inflation forecast of the BSP for 2021.

Despite this, “weak growth” will remain the focus of monetary authorities at its upcoming meeting, Standard Chartered Bank economist Jonathan Koh said.

He noted the BSP now expects inflation to remain elevated this year, before easing to the midpoint of the 2-4% target by 2022 and 2023.

On the other hand, Asian Institute of Management economist John Paolo R. Rivera believes the recent increase in the consumer price index could be a turning point for the BSP to consider hiking rates by 25 basis points (bps) to temper inflation.

However, he pointed out that central banks in Brazil, Turkey, South Korea, Chile, and Peru have already began unwinding their negative real interest rates in a bid to pursue price and financial stability.

“Keeping real interest rates in deep negative territory no longer looks necessary and may in fact lead to a loss of confidence on the independence of the monetary authorities,” Mr. Neri said.

For her part, Mitsubishi UFJ Group Global Research analyst Sophia Ng expects rates will be kept steady, with the BSP also opting for other policy tools to back recovery.

“[This] include the extension of loans to the government and purchases of government bonds from the secondary market,” she said.

Moody’s Analytics Katrina Ell expects the BSP to continue its prudent pause and support the economy’s “laggard” recovery. She said further rate cuts are unlikely for the rest of the year given that there is ample liquidity.

“The Philippines is in the midst of a gradual and fragile recovery that requires a very supportive monetary environment. The Philippines won’t return to pre-pandemic levels of output until late 2022, making it Asia’s laggard,” Ms. Ell said.

BSP Governor Benjamin E. Diokno earlier this month said the economy might take until the fourth quarter of 2022 or the first quarter of 2023 to fully regain its pre-pandemic level.

The central bank chief assured they will strive to keep an accommodative policy stance while ensuring it will not lead to “excessive inflation and trigger financial stability risks.”

The BSP last cut the key policy rate by 25 bps in November. Since then, it has kept rate settings unchanged for seven consecutive reviews.

After Thursday’s meeting, the Monetary Board still has two more policy-setting meetings left this year — Nov. 18 and Dec. 16.

Fitch says will assess ‘scarring effects’ of pandemic on economy