HEADLINE INFLATION likely eased to a seven-month low in July, and returned to within the central bank’s target range, with analysts noting that improved meat supply and a slower rise in transport costs likely offset higher prices of fuel and other food items.

A BusinessWorld poll of 15 analysts yielded a median estimate of 4% for July inflation.

If realized, this would mark the first month since December that inflation settled within the 2-4% target of the Bangko Sentral ng Pilipinas (BSP). It would also be nearer the lower end of the BSP’s 3.9-4.7% estimate for July. 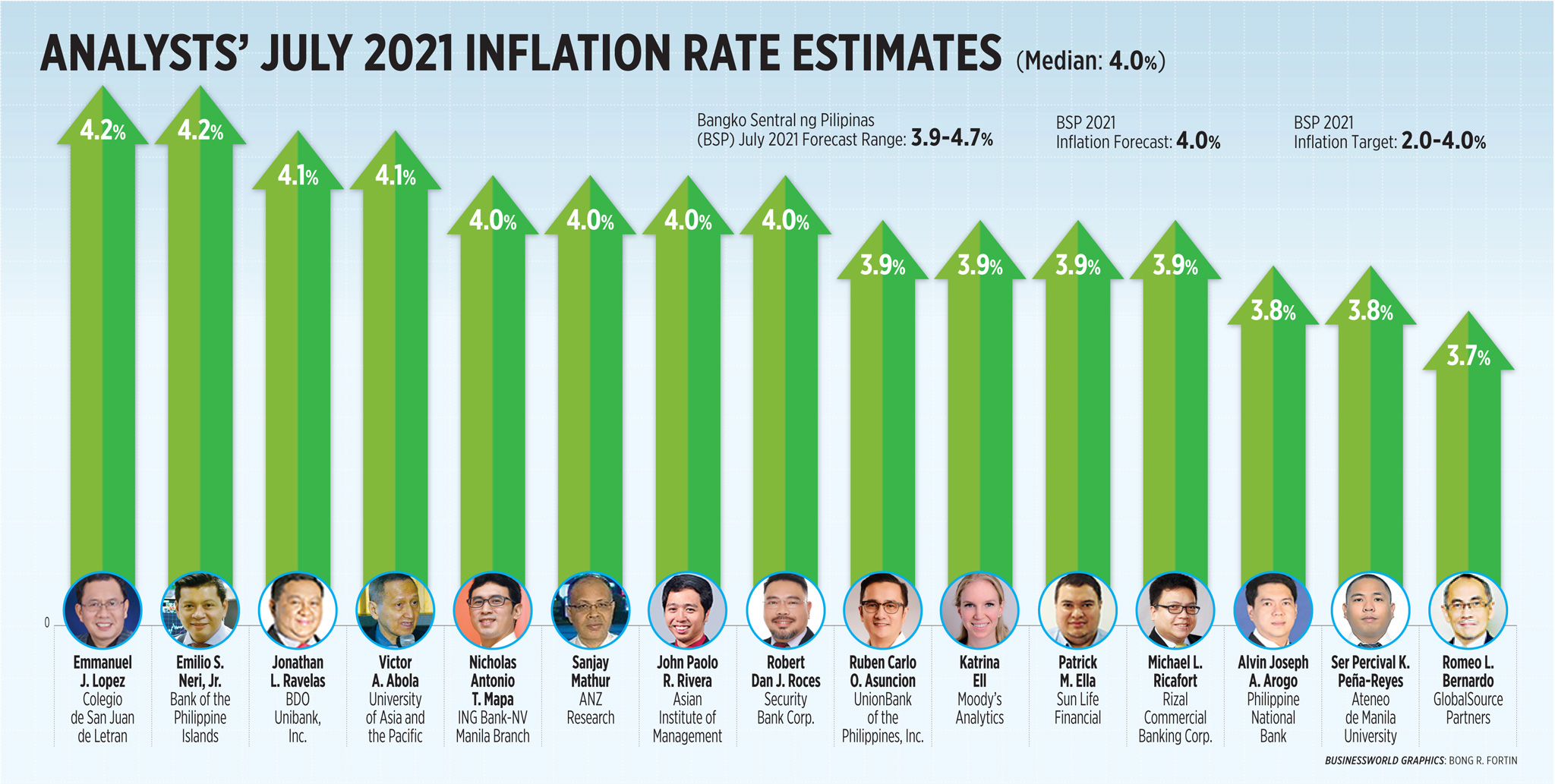 The July print also likely eased from June’s 4.1%, and is the slowest increase in the consumer price index (CPI) since the 3.5% in December 2020. However, it is much faster than the 2.7% a year ago.

Analysts attributed the slight easing in the CPI reading last month to improvements in the supply of meat, even as Typhoon Fabian drove prices of other food staples higher.

The Department of Agriculture said farm damage caused by the typhoon hit P615.72 million as of July 30.

The impact of the continued rise in global oil prices may have been offset by the better supply of meat products in the local market, Alvin Joseph A. Arogo, research head at Philippine National Bank, said.

In May, the government increased the minimum access volume and cut tariff rates for pork imports effective for a year. This was aimed at boosting local supply, after soaring prices pushed inflation beyond the target in recent months.

Meanwhile, global oil prices have steadily risen in the past four months amid continued demand and tight supply. In the local market, prices of gasoline, diesel, and kerosene have gone up by P12.85, P10.30 and P8.70 per liter, respectively, year to date as of July 27.

To recall, the transport index in July 2020 rose by 20.1% due to higher commuter costs. The government continued to limit public transportation capacity, even as the lockdown eased last year.

This year, the central bank expects inflation to average 4%. The CPI reading in the first half of the year was still above target at 4.4%.

The Philippine Statistics Authority (PSA) will report the July inflation data on Aug. 5.

The easing inflation and the rising number of coronavirus cases with the Delta variant strengthen the case for the BSP to retain its loose policy, analysts said.

“There is no reason to assume that this reaction function has changed and if anything, easing inflation can only fortify it,” he said.

Mr. Diokno in June said they will retain an accommodative monetary policy until economic recovery becomes more sustainable, which he believes will happen around the second half of 2022.

On Friday, the BSP chief said this accommodative monetary policy is more crucial given that while the economy is already recovering, the rebound has been “slower-than-anticipated.”

Meanwhile, Bank of the Philippine Islands Lead Economist Emilio S. Neri, Jr. said the BSP could go for a “preemptive” hike under conditions such as the US Federal Reserve announcing its 2022 plan for reduction of asset purchases, which could cause strong depreciation for emerging market currencies like the peso, or when the second-quarter gross domestic product (GDP) exceeds market expectations.

The PSA will release second-quarter GDP data on Aug. 10.

The Monetary Board on June 24 kept the key policy rate at a record low of 4%. It will have its next policy review on Aug. 12.

BSP to weigh pros and cons of issuing CBDCs