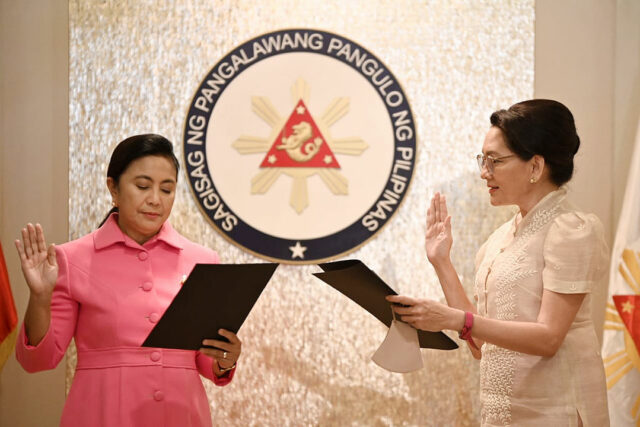 THE LONE opposition senator vowed to push for a higher allocation for the agricultural sector in the national budget as she took her oath on Monday.

“As promised, we will facilitate the increase of budgets for agencies integral to our recovery initiatives,” reelected Senator Ana Theresia “Risa” N. Hontiveros-Baraquel said, citing the need to address food security amid a possible shortage in corn, feeds, fish and pigs this year.

Ms. Hontiveros also said she will be focusing on legislation that will help restore healthcare services disrupted by the coronavirus pandemic.

The senator aims to file at least 20 economic- and health-related bills during the 19th Congress. These include measures on security of tenure, rights and welfare of informal and gig economy workers, and universal pension.

Ms. Hontiveros also reiterated her call to use collections from excise tax and value-added tax on petroleum products to expand service contracting, so “as not to stifle drivers’ income and have enough vehicles for commuters.”

Outgoing Vice President Maria Leonor “Leni” G. Robredo, who administered the oath, called Ms. Hontiveros their “leader” as she is “now the highest elected official in the opposition.”

“We are your soldiers now, Sen. Risa. So, you can expect — just like how you supported the entire Filipino people, you can expect the same support from us,” Ms. Robredo said in Filipino. — Alyssa Nicole O. Tan