Home Special Reports Behind the development of Top 1000 Corporations 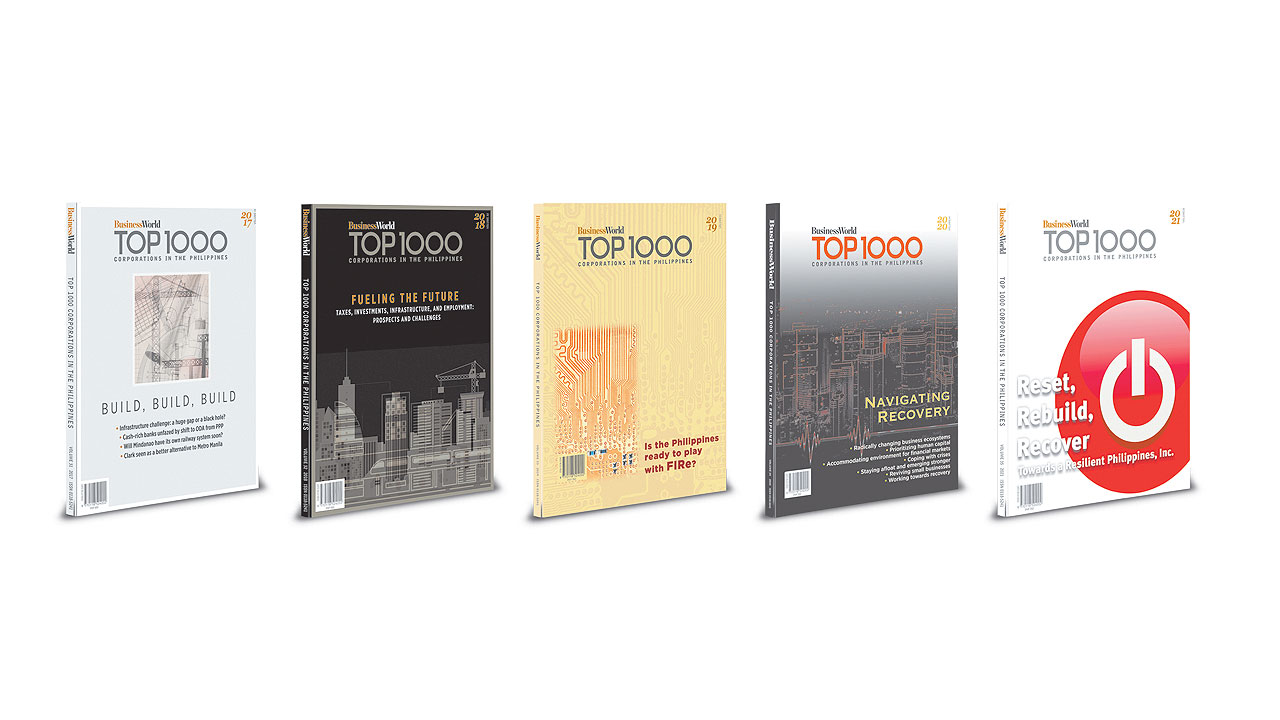 BusinessWorld has been providing information on the performance of the Philippine corporate sector for 35 years now. And this is not merely on the stories about the current affairs in the business scene. The BusinessWorld Top 1000 Corporations in the Philippines is produced annually to show how the country’s leading firms performed based on their financial statements.

Given that a lot of financial information have to be gathered and examined to come up with the Top 1000, how does BusinessWorld ensure the exhaustiveness and accuracy in doing and presenting the rankings for the magazine?

The Top 1000 uses private and public stock entities’ gross revenues from their most recent available full-year audited financial statements (AFS) as its basis for ranking. The main top 1,000 list only consists of parent and standalone companies.

“Our main ranking using gross revenues — the sum of net sales and other non-operating income — of the parent companies dated back to when a similar list was published by the BusinessWorld’s predecessor, Business Day, in 1968 (it was only top 200 corporations back then). It was expanded to a full 1,000 companies in 1970,” shared Mark A. Amoguis, research head of BusinessWorld.

The publication provides a separate table ranking of the conglomerates, since BusinessWorld uses consolidated financial statements.

“By comparing only parent companies, BusinessWorld provides an accurate picture of individual companies (or segmented units of a conglomerate) in the country. Comparing parent or standalone companies and conglomerates side by side in one single ranking may result in double-counting, or worse: a distorted comparison between apples and a truckload of apples and oranges,” Mr. Amoguis explained.

Firms could also get a view of their performance or market position alongside their competitors through the Top 1000’s “How Competitors Compare.” The table clustered parent companies as per business activity and ranked them based on gross revenue. The grouping is sorted in line with the 2009 edition of the Philippine Standard Industrial Classification by the Philippine Statistics Authority.

The Top 1000 magazine also presents several other income statement and balance sheet items, among which are net sales, net income (or loss), assets, and payables.

To collate the needed financial data to come up with the Top 1000, BusinessWorld’s research team gather the AFS that private firms submitted to the Securities and Exchange Commission (SEC), annual reports disclosed by publicly listed companies to the Philippine Stock Exchange (PSE), and the government-owned and -controlled stock corporations’ AFS from the Commission on Audit (CoA).

“In case the parent AFS of a company is not available in the SEC, we personally contact it to get it,” Mr. Amoguis said.

“We also have to verify if a company is a stock corporation by also getting its latest General Information Statement from the SEC as we have to exclude partnerships, foundations, and other nonstick entities from our list,” he added.

Researchers collect only the AFS covering the fiscal year ending between May and December of the year prior as well as between January and April of the current year. For these AFS become available in the SEC, PSE, and CoA beginning in May up to as late as November of the present year, shared Mr. Amoguis.

The research head of BusinessWorld assured that their team painstakingly produces the Top 1000. “Rigorous analysis has been put into each and every company included in the magazine. Individual data points are checked and rechecked again down to the last centavo,” he said. “Our methodology and computations have been vetted by the leading auditing firms in the country.”

A GLIMPSE OF TOP 1000
The most recent Top 1000 that BusinessWorld released last year showed the impact of the COVID-19 crisis on the corporate sector in 2020.

Looking at the performance of conglomerates in 2020, the recent top 200 ‘consolidated’ corporations saw their aggregate gross revenue drop by a fifth to P9.46 trillion from their P11.87 trillion in 2019.

Currently, BusinessWorld’s production of the upcoming Top 1000 is in progress.

“As the next edition of the Top is now under way, we are hopeful that our collection process will go smoothly barring any disruptive events (like the strict lockdowns imposed at the height of the coronavirus pandemic in 2020 that severely affected the companies’ submission of their AFS),” Mr. Amoguis said.

The next Top 1000 will cover the AFS of companies in 2021. This will give readers a picture of how the COVID-19 crisis continued affecting the business sector, according to Mr. Amoguis.

Furthermore, BusinessWorld will soon launch the Top 1000 Premium, a web app development that will provide users a digital and more interactive way to access the Top 1000 data.

The rise of neighborhood malls: How malls are changing in the post-pandemic era