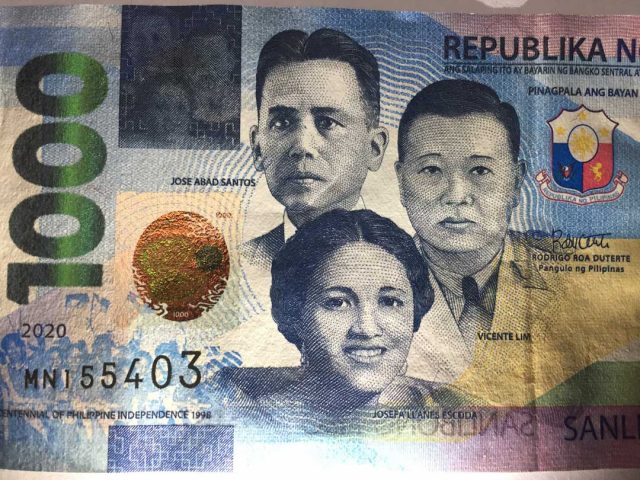 In response to the public furor caused by the replacement of the portraits of World War II heroes Jose Abad Santos, Vicente Lim, and Josefa Llanes Escoda by the Philippine Eagle in the upcoming P1,000 polymer banknotes, Bangko Sentral ng Pilipinas (BSP) Governor Benjamin Diokno explained that redesigning the bill is part of its direction to shift from cotton and abaca to plastic synthetic material. They also decided to change the design to fauna and flora because that is the trend in other countries. “The eagle symbolizes the whole country,” Diokno noted.

The governor further clarified why the BSP shifted from the use of paper to polymer in making bills. He said polymer is safer amid the COVID-19 pandemic. It is also more cost-effective because polymer’s lifespan can be five times longer than paper and it is environment friendly.

“It was not an attempt to revise history. You cannot change a country’s history. The heroes will be heroes whether they are in bank notes or not,” Diokno said to allay the fears of certain civil society groups who suspect the change is part of a cunning scheme to remove the portraits of Benigno Aquino, Jr. and Corazon Aquino from the P500 bill given the attempt of a certain sector to revise history and the current dispensation’s disposition to allow it.

But if the BSP is just following the trend in other countries to change the designs of bank notes to flora and fauna, why are the other bank notes not going to be changed as well? And why feature the Philippine Eagle, an en-dangered species, when the national animal is the carabao?

And if the shift from paper bills to polymer bills is to make bank notes safer, more cost efficient, and environment friendly, why not convert the lower denomination bank notes like the P20, P50, or even the P100 bills which deteriorate faster due to their high rate of circulation?

The heroism of Jose Abad Santos, Vicente Lim, and Josefa Llanes Escoda have something in common. The three played key roles in the Philippine resistance to the Japanese occupation. All three were executed by the Jap-anese military.

Abad Santos was an Associate Justice of the Supreme Court when World War II broke out. President Manuel L. Quezon named him Chief Justice on Dec. 24, 1941.

When the Japanese Imperial Army looked like it would gain control of much of the country, US military adviser to the Philippines General Douglas MacArthur advised Mr. Quezon to establish a government in exile in the United States. Quezon asked Abad Santos to leave with him. But the latter decided to stay in the country to carry on with his work. Quezon then designated him Acting President, with full authority to act in the name of and on behalf of the President of the Philippines. But on April 11, 1942, he and his son Jose Junior were captured by the Japanese. When he refused to cooperate with the Japanese occupation government, he was condemned to be executed. When Abad Santos told his son, Jose Junior, on May 2, 1942, that he was to be executed that afternoon, the son broke down and wept. The father reproached his son, but gently said: “Do not cry, Pepito. Show these people that you are brave. It is an honor to die for one’s country. Not everybody has that chance.”

I remember Senator Jose W. Diokno saying many years ago, in observance of the martyrdom of Jose Abad Santos, that Abad Santos’ sacrifice was greater than that of many who also gave up their lives for the country as Abad Santos did not know if his son would come out of the Japanese barracks alive to tell the Filipino people of his father’s choice to die rather than cooperate with the occupation government.

In August 1941, as the threat of war became more imminent, President Quezon put General Vicente Lim, the first Filipino to enter and graduate from the United States Military Academy in West Point (Class of 1914), in com-mand of the 41st Infantry Division of the Philippine Army.

Lim’s 41st Infantry Division took a defensive position in the town of Abucay. From Jan. 8 to 26, 1942, the Japanese tried to break the 41st Division line but failed. Lim wrote to his wife: “I sincerely give the credit to my officers and enlisted men. They are the ones who did it all. Mine is only to inspire and to lead them. When history is written I will give them all the credit. Their satisfaction is mine to share.”

Four months of fierce fighting the Japanese, the elements, hunger, and disease decimated the defenders of Bataan. On April 9, 1942, all Filipino and American forces on Bataan were ordered to surrender.

Upon his release, Lim went to live in Manila. He was sent feelers to head the puppet Philippine Constabulary. Determined not to have anything to do with the Japanese occupation government, he feigned illness and had himself confined at the Philippine General Hospital. There he continued to resist the Japanese by funding various guerrilla activities.

His involvement in the resistance movement made him a target of the Kempeitai, the Japanese Military Police. In June 1944, Lim was captured. He was imprisoned in Fort Santiago where he was tortured. Eventually, he was transferred to the old Bilibid Prison. Nothing was heard about him again.

In 1994, a US Army intelligence agent stationed in the Philippines at the outbreak of World War II told the family that General Lim, together with some 50 or so guerrillas, were taken to the Chinese Cemetery where they were all beheaded.

Josefa and her husband Antonio were visiting the General Federation of Women’s Clubs and the Girl Scouts chapters in the US and Europe when Germany invaded Poland in September 1939. Foreseeing the war eventually ex-tending to Asia, the couple cut short their trip. Upon their return to the Philippines, Josefa began rallying the 800 National Federation of Women’s Clubs (NFWC) chapters across the country to educate women on how to gather information, conduct orderly evacuations, set up emergency first aid centers, grow and preserve food in homes, and make bundles for emergency.

Following the fall of Bataan, the Escoda couple joined a group of doctors leaving for San Fernando, Pampanga where the survivors of the Death March were to be transported to Camp O’Donnell in Capas, Tarlac. They came back with lists of names of prisoners, addresses of relatives, and notes.

Josefa mobilized the NFWC staff to make the connections between prisoners and their families in Manila. The Escodas even opened a coffee shop on the road leading to the prison camp in Cabanatuan where hundreds of American soldiers were held so they could gather information from the conversations of Japanese soldiers taking their break in the shop.

In January 1944, the Escodas began to get word that their activities had become the focus of undercover agents working for the Japanese and that the Kempeitai were on their trail. In June, Antonio was captured in Batan-gas. He was beheaded in November 1944.

Sensing the imminence of her own capture, Josefa left this message with someone: “If you survive, tell the people that the women of the Philippines did their part in making the ember sparks of truth and liberty alive till the last moment.” In August 1944, Japanese soldiers arrested Josefa. She was believed to have been executed in the Chinese cemetery in February 1945.

It will be recalled that in 2018 the Women’s group Gabriela strongly condemned the removal of the statue of the Comfort Woman (as sex slaves of the Japanese soldiers in World War II were called). The statue, the group said in a statement, “supposedly serves as a reminder to future generations of Japan’s atrocities and abuses against Filipino women during the Second World War. With the statue’s removal, Japan once again succeeded in im-posing its revisionist take on WWII on the puppet Duterte regime,” Gabriela added.

Could the removal of the portraits of Jose Abad Santos, Vicente Lim, and Josefa Llanes Escoda from the P1,000 bank note be part of the conditions for Japan’s support of the country’s infrastructure program worth trillions of US dollars? If it is, it can be considered the second “execution” of the three but this time with the cooperation of Philippine officials.

OSCAR P. LAGMAN, JR. is a retired corporate executive, business consultant, and management professor. He has been a politicized citizen since his college days in the late 1950s.

What are the blood clots being caused by some COVID-19 vaccines? Four questions answered

Nothing to worry about President’s health, palace says