Consumers in the Philippines continue to be penalized by high inflation. In 2018 when the TRAIN law was implemented, the country was the “inflation valedictorian” among the big and stable economies in East Asia with 5.2%. Last year, six economies had inflation rates of below 1% and yet the Philippines had 2.5%. In January, our inflation rate spiked to 2.9% (see Table 1). 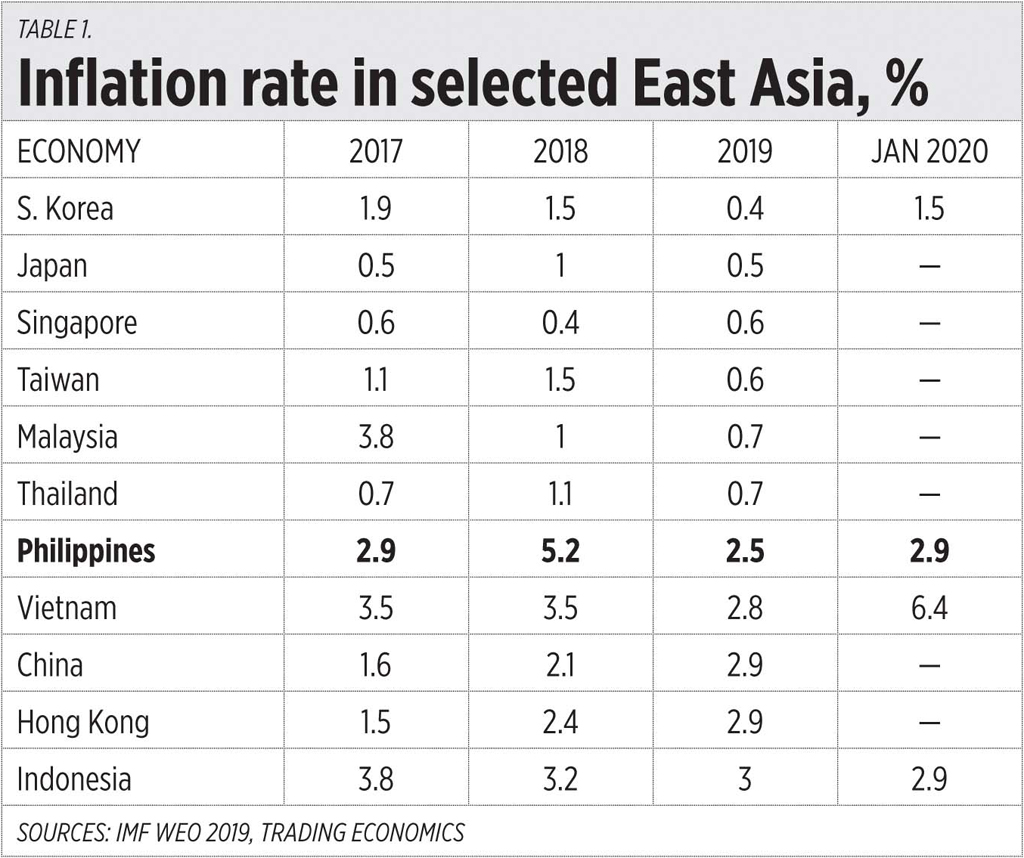 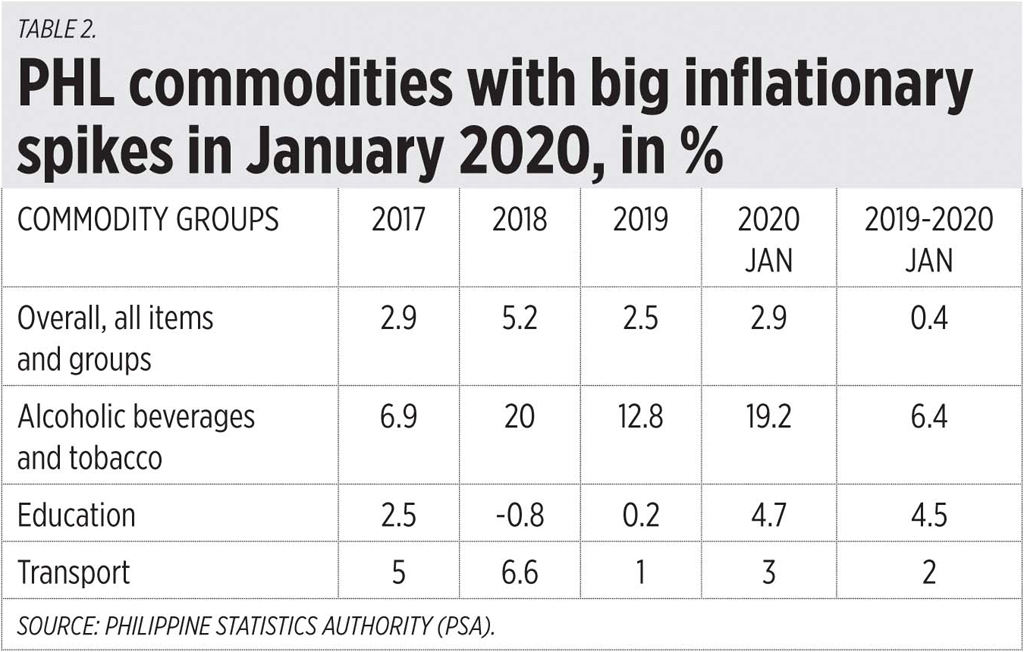 Big price hikes in alcohol and tobacco products are due to sustained tax hikes by the Department of Finance and Congress. The price hikes in education are due to a low base in 2018 and 2019. The same for transportation.

I am curious, did the expansion of transport network vehicle services (TNVS) into motorcycles — from about zero in 2018 to 27,000 by Angkas in 2019 — contribute to the sudden spike in transport inflation?

In TNVS cars, there are about 10 players — Grab, Hype, HirNa, GoLag, Iparra, MiCab, Mober, U-Hop, E-Pick me up, and OWTO. The Land Transportation Franchising and Regulatory Board (LTFRB) has set a maximum of 65,000 vehicles in Metro Manila, combined for all players. Dominant player Grab, with about 43,000 cars in 2018, retained the allotted cars with no increase almost two years after Uber left the Philippines and the rest of ASEAN countries. Booking demand keeps rising while the supply of TNVS cars has remained constant.

The competition among regular taxi, TNVS cars, and TNVS motorcycles seem to favor the latter because while the cap for taxis and TNVS cars was retained, the cap for the latter is expanding. From almost zero in 2018, this went to 27,000 through Angkas in 2019, and 63,000 in 2020 for the three players, which might be further expanded within the year.

This is good news for people who are willing to ride the two-wheel taxi. For people who want safer, more comfortable and air-con ride via regular taxis and TNVS cars, this is bad news. The LTFRB is sitting on their petition to expand the cap.

Now with nCoV scare, more people want to avoid high density transportation like trains and buses. They prefer to drive their own cars despite the heavy traffic, or take a regular taxi or TNVS car. So demand for the latter has increased but the supply has not.

The LTFRB must take this into consideration — not just passengers’ convenience and safe travel, but also safety from high-density mass transportation where potential virus transmission among people would be higher.

Expanding the cap on TNVS cars need not mean additional cars on the road. A simple change in the rules will do — like allowing cars that are up to five or six years old provided they are well-maintained, versus current restriction of cars that are three years or younger to apply for TNVS franchise.

The bottomline is that government via the LTFRB should step back from its bureaucratic and restrictive policy-making. Raise the cap, if not abolish the cap, for all TNVS vehicles — cars and motorcycles. Competition among them will ensure that the fares will adjust downwards while service quality and transparency will be maintained if not raised further.

The best judges to patronize or leave/boycott certain players and services will be the passengers, not the government bureaucracies. And with the dragging uncertainties brought along by the nCoV scare, the more passengers and commuters should be given leeway in choosing their forms of mobility. For travel convenience and health reasons.