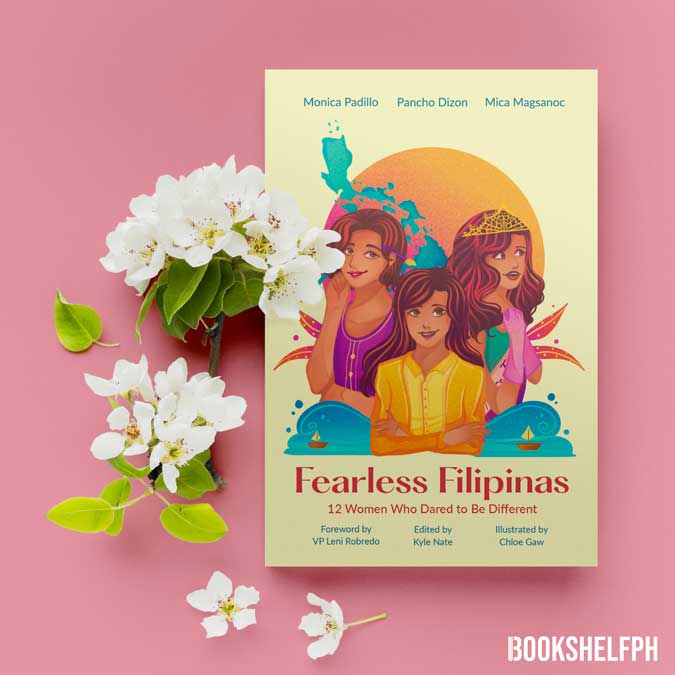 …and other challenges overcome by the women in Fearless Filipinas

WHILE waiting to start a job in a bank, the young Jessie Sincioco entered her aunt’s mango cake recipe in The Maya Cookfest, a popular cooking contest organized by The Maya Kitchen. After unexpectedly winning the grand prize in the baking category, she let go of the bank job, instead going on a 10-day cultural exchange trip in Japan which was part of the prize. Her win also led to an offer to join the Hotel Intercontinental’s staff as a kitchen trainee. She wore a pink blouse, a miniskirt, and three-inch wedge shoes on her first day — not the most practical outfit to wear in a commercial kitchen. The unfortunate wardrobe choice did not hold her back though.

“There was no girl in the kitchen. When I started training, I felt that it was where I belong. I had to prove to myself that I could be part of the male dominated [job]…,” said Ms. Sincioco, who went on to establish her own group of restaurants and is now president of The Manna Cuisine Corp.

Born and raised in Arizona, USA, Jessica Cox ate her meals, wrote, and drew with her feet. She freed herself from using prosthetic arms as a teenager despite having used them since age three. As an adult who had learned how to drive, surf, and type on a keyboard — all without arms — Ms. Cox still felt anxious when faced with the challenge of flying a plane. But this did not stop her.

“There are very few women in aviation. I think at that point in time, [aviation] was less than 6% composed of women,” said Ms. Cox, who is the world’s first licensed armless pilot, and also a motivational speaker.

Elda Rotor told her father over the phone of her decision to shift from her pre-med program to pursue a degree in English. Skeptical, he reminded his daughter that no one in the family and none of their friends had any connections in the publishing industry. Still, she persisted. After university, she found it challenging to enter the industry — but one day she received a phone call from an unknown number. The voice on the opposite end of the line was that of Elizabeth Maguire, executive editor of the Oxford University Press. She offered Rotor a job as an editorial assistant. Ms. Rotor is now the Vice-President and Publisher of Penguin Classics.

INSPIRING STORIES
Ms. Sincioco, Ms. Cox, and Ms. Rotor’s stories are among the 12 success stories featured in Fearless Filipinas: 12 Women Who Dared to Be Different. The book is the latest publication from online bookstore Bookshelf PH, which specializes in business books and other non-fiction titles.

Written by Monica Padillo, Pancho Dizon, and Mica Magsanoc, the book also includes informative illustrations related to each of the featured personalities’ fields such as the hierarchy in a commercial kitchen, the ranks in a ballet company, how a prosthetic arm works, the SEA Games course, and sample headlines of the Matilda effect in broadsheets. (The Matilda effect is a theory about sexist discrimination where the achievements of women scientists are attributed to their male colleagues.)

“Often when young girls see CEOs or actresses or artists in [such] high positions, [they] find that to be unattainable, sometimes because they only see them at the peak of their career and they don’t see the journey it took them to get there,” co-author Monica Padillo said during the online book launch at the tailend of Women’s Month.

ADVICE TO YOUNG WOMEN
Mses. Sincioco, Cox, and Rotor were among the women who participated in a discussion during the book launch, sharing their advice for young women.

“The whole world can be your playground, just know your parameters. Continue learning, improving, and developing your talent because opportunities are endless,” Ms. Sincioco said.

“You have to try to find people who can build that spark that you’re feeling inside,” Ms. Rotor said of the importance of mentorship. “I just feel like it’s our duty to be scaffolding for future generations to build themselves up, and I hope that I can be a small part of that.”

Ms. Cox relates being in a position of vulnerability as a strength when it comes to her profession as a motivational speaker.

“When you connect with your audience, coming from a position of vulnerability is a lot more powerful than coming from an empowered position,” she said. “You have to be okay to even be in front of thousands of people and be your vulnerable self. But it will be the most powerful version of yourself.”

“The moment I found out there was another woman who lived life without arms, and was successful at life, it changed my life. They transformed my life and believing that I could do anything…,” Ms. Cox said. “I became a pilot, because I was terrified of flying and it was my greatest fear and I wanted to overcome that, to help others, overcome their own fears and whatever holds them back from achieving greatness.”

More than 4,000 Indians die of COVID-19 for second straight day

Taking a break from the usual

It’s about time to understand HIV