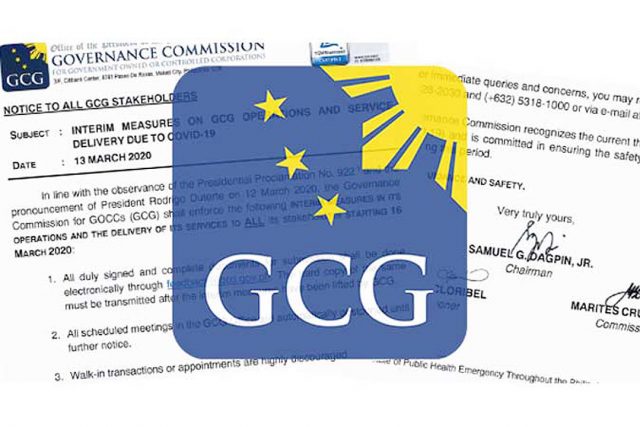 FUNDING for increased salaries designed to make hiring more competitive at government-owned and -controlled corporations (GOCCs) will be sourced from the companies’ operating budgets, the Secretary of Finance said.

The Governance Commission for GOCCs on Friday issued the guidelines of the Compensation and Position Classification system, which implements an executive order making salaries at GOCCs comparable to those offered by the private sector.

Finance Secretary Carlos G. Dominguez III said salary adjustments will be handed out based in part on the financial health of each GOCC.

“This will definitely be sourced from their COB (corporate operating budget) and in no way should be a reason for additional National Government subsidy,” he told reporters in a Viber message on Friday.

Executive Order No. 150, signed by President Rodrigo R. Duterte in October, said the commission is in charge of recommending competitive compensation that can attract and retain talent while keeping GOCCs financially sound.

The implementing guidelines show what is covered and excluded in the compensation system, the benefits and incentives, and procedures.

GOCCs must use the new system once they receive authorization from the commission.

This authorization will prescribe an appropriate compensation system to be used by the GOCC, based on the nature of its operations and its finances.

“Upon receipt of its authorization, the GOCC Governing Board shall approve the appropriate salary schedule under the CPCS with due consideration of the GOCC’s capability to afford and sustain its implementation,” the commission said.

The implementing guidelines cover all regular, casual, and contractual positions of GOCCs and their subsidiaries.

Subsidies extended to GOCCs fell by 46% year on year to P12.33 billion in November, the Bureau of the Treasury said.

Despite the year-on-year decline, the Treasury said GOCC subsidies in November 2021 more than doubled the P5.2 billion seen in October.

Subsidies are granted to GOCCs to cover operational expenses not supported by their revenue. — Jenina P. Ibañez