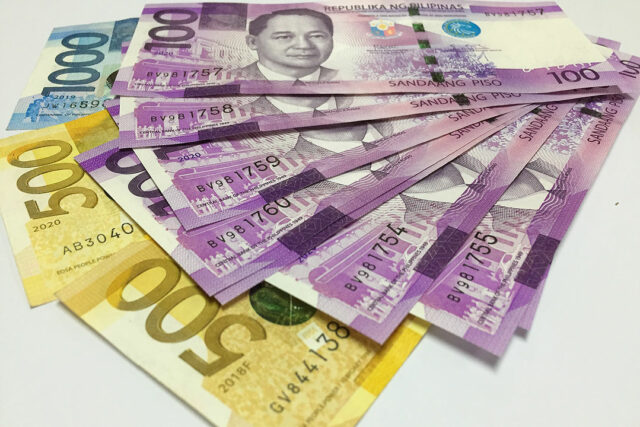 THE peso may strengthen versus the greenback this week as analysts await the release of first-quarter economic growth data, although this could be offset by risk-off sentiment ahead of official election results.

The local unit closed at P52.50 per dollar on Friday, weaker by 11.5 centavos from its P52.385 finish on Thursday, based on Bankers Association of the Philippines data.

Data released by the Philippine statistics authority showed the trade deficit nearly doubled to $5 billion in March from $2.759-billion gap a year earlier. This was driven by the 27% growth in imports to $12.175 billion, while exports also rose by 4.9% to $7.171 billion.

Mr. Ricafort said there was also risk-off sentiment in the market on Friday as it was the last trading day before the national elections on Monday, May 9.

Headline inflation accelerated to a three-year high of 4.9% in April, driven by soaring food and energy prices. This is already beyond the 2-4% target set by the Bangko Sentral ng Pilipinas and also quicker than the 4.6% median estimate of 17 analysts in a BusinessWorld poll.

Mr. Asuncion said the market will be on the lookout for first-quarter economic growth data this week, as this could strengthen the case for a rate hike from the Bangko Sentral ng Pilipinas (BSP). The Philippine Statistics Authority will report the preliminary gross domestic product data (GDP) for the January-to-March period on May 12, Thursday.

A BusinessWorld poll of 17 analysts yielded a median estimate of 6.7% in the first quarter. If realized, this would mark the fourth straight quarter of annual economic expansion but is slower than the 7.8% growth in the fourth quarter of 2021.

Economists said the Omicron surge in January, as well as the impact on spending of rising commodity prices caused by the war in Ukraine, likely slowed economic growth in the first quarter.

BSP Governor Benjamin E. Diokno has said policy makers might consider a rate hike at their June 23 meeting, taking into account whether economic growth is more entrenched as reflected by GDP and unemployment data.

Meanwhile, Mr. Ricafort said the market would be on the lookout for the results of the national elections.

Former Senator Ferdinand R. Marcos Jr., the son of the late dictator, is still the frontrunner for the presidency based on the latest round of surveys. However, Vice-President Maria Leonor G. Robredo, the second leading candidate for the top post, is seen to be more favored by the market, based on a Bloomberg poll of analysts.

The market is closed this Monday in view of the special non-working holiday declared for the national elections.