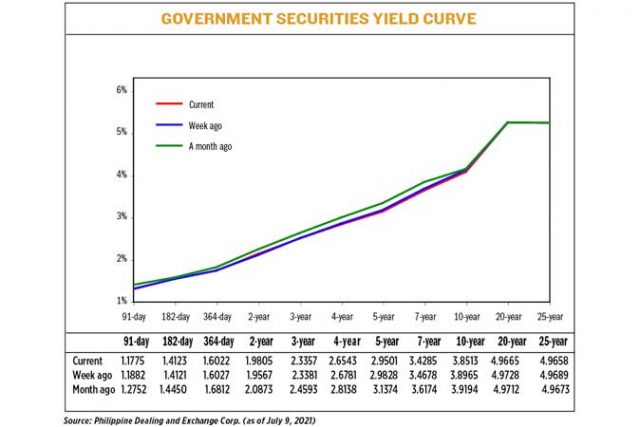 YIELDS on government securities (GS) traded in the secondary market ended flat last week as the market reacted to the peso’s depreciation, bond auctions, and the release of the minutes of the US Federal Reserve’s June meeting.

Debt yields fell by an average of 1.27 basis points (bps) week on week, based on the PHP Bloomberg Valuation Reference Rates as of July 9 published on the Philippine Dealing System’s website.

“There were multitude of factors for the past week: June’s CPI (consumer price index) inflation printed better than expected at 4.1% and then US Treasury yields traded lower on a week-on-week basis as COVID-19 (coronavirus disease 2019) variants may have fueled some concerns about a possible slowdown in global economic growth,” the trader said.

The bond trader also noted improved sentiment for bonds after the minutes of the Federal Open Market Committee’s June 15-16 meeting released last week showed that while there were discussions on reducing asset purchases, US central bank officials expressed the need for patience in unwinding its pandemic-driven easy monetary policy.

“On the other side of the spectrum, some profit taking was seen on the recently reissued seven-year paper which cheapened by 7.5 bps week to date. Some market players were also vigilant on the rise of the [peso-dollar] exchange which already moved past the P50.00 handle,” the bond trader added.

“[T]owards the latter part of the week, market focus shifted towards the sharp peso depreciation and supply inflow via the 20-year auction [this] week. Yields adjusted back up to close the week largely flat with a decent portion of the week’s volume focused on seven-year and longer tenors with players freeing up some space prior to the auction,” Mr. Liboro said in an e-mail.

Meanwhile, the Bureau of the Treasury on Tuesday raised P35 billion as planned via the reissued seven-year T-bonds with a remaining life of six years and nine months. The offer was nearly two times oversubscribed with tenders reaching P61.175 billion, causing the Treasury to open its tap facility to raise an additional P5 billion from the tenor.

The reissued bonds fetched an average rate of 3.576%, 10.8 bps higher than the 3.468% quoted for the seven-year tenor at the secondary market prior to the auction.

On the other hand, the government reported last week that headline inflation eased to 4.1% in June, the slowest rate in six months. It brought the six-month average to 4.4%, above the central bank’s 2-4% target and 4% forecast for the year.

“We expect it to clear around 5% where it will have decent value given the recent deceleration in inflation. While there may be some short-term pressure higher on yields, we expect yields to gradually run lower from current levels as inflation drops below 4% by year-end,” Mr. Liboro said.

The Treasury will auction off P15 billion in T-bills on Monday and P35 billion in fresh 20-year T-bonds on Tuesday. — B.T.M. Gadon