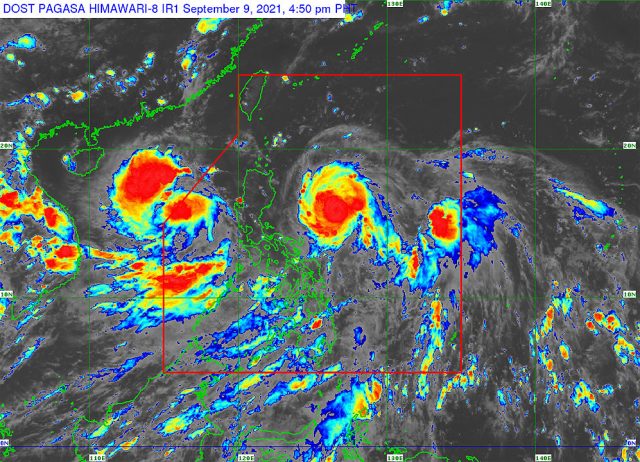 ANOTHER SEVEN people were reported missing, bringing the total to 19, and more than 79,000 were affected in the aftermath of tropical storm Jolina (international name: Conson), according to the national disaster management agency.

In its Sept. 9 report, the National Disaster Risk Reduction and Management Council (NDRRMC) said 12 fishermen from Samar and three from Biliran have been confirmed to have gone out to sea despite warnings from authorities. Four other persons from Masbate reported missing are still being verified.

NDRMMC said 79,062 people were affected by the 10th typhoon to hit the country this year, including about 7,867 who were displaced from their homes across the regions of Central Luzon, Mimaropa, Calabarzon, Western Visayas, and Eastern Visayas.

More than 120 road sections were rendered impassable due to landslides or damage, but most of these were already reopened as of Thursday morning.

The Philippine Coast Guard also announced Thursday that shipping and fishing operations in all seaports have resumed.

Damage to agriculture has reached P299.40 million compared to the previous estimate of P179.57 million, affecting 62,052 farmers, according to the Department of Agriculture (DA).

The DA’s Disaster Risk Reduction and Management Operations Center said in a bulletin on Thursday afternoon that Jolina affected 57,649 hectares of farm areas in the regions of Calabarzon, Bicol, Western Visayas and Eastern Visayas.

“These values are still subject to validation,” the DA said in the bulletin.

Damage to fisheries amounted to P662,000 while livestock and poultry losses, consisting of 171 combined heads of goat and duck, reached P58,000.

“The DA, through its regional field offices, is conducting further assessment and validation of damage and losses brought by Typhoon Jolina in the agri-fisheries sector,” the bulletin said.

As of 5 p.m. Thursday, weather agency PAGASA said Jolina was already 410 kilometers (kms) west of Dagupan City and was expected to be out of the Philippine area by Friday morning. — Marifi S. Jara and Revin Mikhael D. Ochave

Livin’ in a surreal world

Banana exports projected to decline 20% in 2020

Nine of 10 Filipinos worried of infection as cases top 14,000