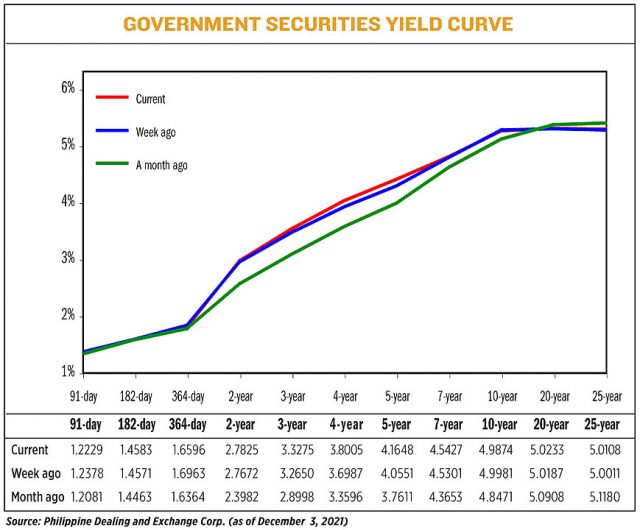 Bond yields, which move opposite to prices, rose by an average of 2.32 basis points (bps) week on week, based on PHP Bloomberg Valuation Service Reference Rates as of Dec. 3 published on the Philippine Dealing System’s website.

“The market continues to price in the substantial increase in government debt and its impact on the country’s credit ratings,” Mr. Neri said in an e-mail interview.

ING Bank N.V. Manila Branch Senior Economist Nicholas Antonio T. Mapa noted that GS yields rose higher, particularly in the belly of the curve, as “the anticipated trading of the RTB took center-stage…which may have affected trading sentiment with some investors taking profit.”

“Meanwhile, concerns over the potential negative impact from the Omicron variant may have given the market additional trading color,” Mr. Mapa said in a separate e-mail interview.

The Bureau of the Treasury (BTr) last week said the government raised P360 billion through its offering of five-and-half-year RTBs, which was launched on Nov. 16 and ran until Nov. 26.

Broken down, the BTr secured P330.5 billion in fresh funding, while P29.5 billion came from the bond exchange program. The retail bonds carry a coupon rate of 4.625% due 2027 and were issued on Thursday.

These retail bonds are offered to small investors that want low-risk, higher-yielding instruments for as low as P5,000.

Meanwhile, the Philippines is ramping up its vaccination program as the threat of the latest variant of the coronavirus disease, which was first detected in South Africa, looms.

The Omicron variant has yet to be detected in the country but has closed its borders to South African countries as well as other Asian and European countries where such cases have been recorded.

Analysts said the release of November inflation data and the auction of reissued 10-year T-bonds, which have a remaining life of nine years and seven months, on Tuesday will drive yield movements this week.

The Bangko Sentral ng Pilipinas expects November inflation to settle between 3.3% and 4.1%, slower than the 4.6% clip in October, amid a stronger peso and oil price rollbacks.

“We could have a positive December movement from potential window dressing and relatively lower issuance for the month by the Bureau of the Treasury. The curve could flatten favoring long dates similar to US Treasuries,” he added in an e-mail. — Abigail Marie P. Yraola

Yields on government debt decline across the board

Yields on government debt drop on hints of RRR cuts