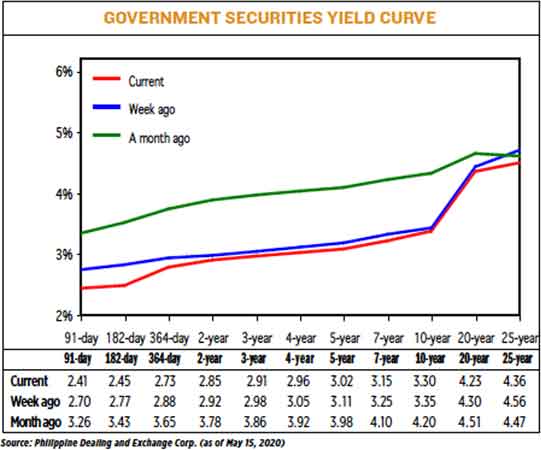 GS yields declined by 13.6 basis points (bps) on average week on week, according to the PHP Bloomberg Valuation Service Reference Rates as of May 15 published on the Philippine Dealing System’s website.

“Local GS yields have been declining across the curve, tracking the drop in US Treasury yields,” a bond trader said in an e-mail, which is due to the “lingering market fears” on the impact of the coronavirus disease 2019 (COVID-19) pandemic on the global economy.

“US Treasuries yields are also declining at the back of weak US jobs data and US Federal Reserve Chairman Jerome H. Powell’s cautious tone when he said the US economic outlook was ‘both highly uncertain and subject to significant downside risks’ amid the COVID-19 pandemic,” the trader said, noting the US central bank chief said more stimulus will be needed to offset a downturn in the US economy while rejecting the possibility of negative interest rates.

“While not a key driver, a slight move lower in global yields was supportive of the adjustment in local yields as well with strong buying interest persisting,” he said in a separate e-mail.

On a virtual event on Wednesday, Mr. Powell warned of an “extended period” of weak economic growth after the US Department of Labor said the unemployment rate jumped to 14.7% in April, above the post-World War II record high of 10.8% in November 1982.

The US central bank has slashed key interest rates to near zero, a level not seen since the Global Financial Crisis of 2007 to 2008.

At home, earlier reports show domestic headline inflation easing to 2.2% in April from 2.5% in March. Meanwhile, economic output shrank by 0.2% in the first quarter – the first since the three-percent contraction in the fourth quarter of 1998 at the height of the Asian financial crisis.

BSP Governor Benjamin E. Diokno said the country still has “ample fiscal and monetary space” amid the COVID-19 pandemic as he expects a full-year contraction which could be less severe than other economies in the world.

The central bank already reduced interest rates by a cumulative 125 bps this year, with benchmark rates now ranging from 2.25% to 3.25%.

“The momentum in the market is difficult to deny; volumes continue to be strong with bulk of interest still on the buying side. However, we feel that the market is fairly priced at current levels and has partially priced ahead potential for further BSP action as well. Given this, we feel that risks are tilted towards potentially higher yields in the short term,” ATRAM Trust’s Mr. Liboro said.

“We see the future BTr (Bureau of the Treasury) auction schedule as a potential catalyst. While we believe the market could readily absorb the additional supply, given current levels, issuances on longer tenor securities may cause some retracement higher, particularly since the yield curve is very flat at the moment,” he added.

On the other hand, the bond trader is “anticipating bond yields to go down further (looking at 10-15 bps on the average) as concerns on the coronavirus continue to pose a threat to global economic growth.”

“Too much liquidity in the market and given the situation, there is a strong demand among investors for safe and liquid securities amidst the pandemic,” the bond trader said.