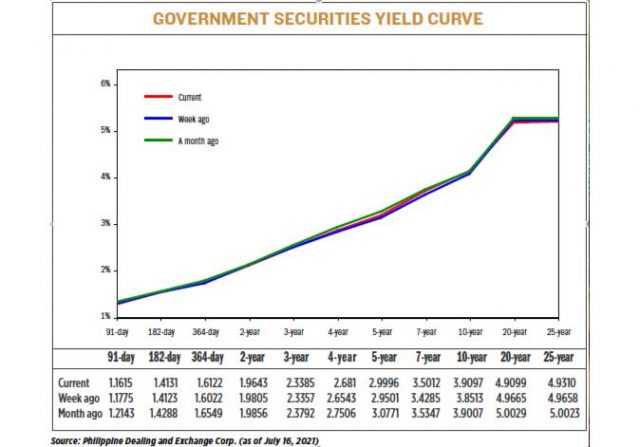 GS yields, which move opposite to prices, rose by an average of 0.88 basis point (bp) week on week, based on the PHP Bloomberg Valuation Service Reference Rates as of July 16 published on the Philippine Dealing System’s website.

“This brought some defensiveness initially and heading into the 20-year auction last Tuesday,” Mr. Ladaban said. “However, following a relatively tame bond auction and with global yields staying largely range bound, we eventually saw some bargain hunting which generated some buying interest towards the end of the week, particularly in the short end of the curve.

Fitch last week revised its outlook for the Philippines to “negative” from “stable,” while keeping its “BBB” credit rating for the country.

The “negative” outlook means Fitch may downgrade the Philippines’ credit rating if it reverses reforms or departs from the prudent macroeconomic policy framework that leads to continued higher fiscal deficits. A weaker macroeconomic outlook over the medium-term and “diminishing policy credibility” may also lead to a downgrade.

Fitch has kept the Philippines’ rating at “BBB,” which is one notch above the minimum investment grade, since December 2017.

Meanwhile, the Bureau of the Treasury (BTr) raised P16.799 billion via its offer of fresh 20-year T-bonds on Tuesday, less than half of the programmed P35 billion, after yields increased following Fitch’s move. Total bids for the bonds reached P63.069 billion, making the offering nearly twice oversubscribed.

On the other hand, a bond trader attributed the yield movements last week to Federal Reserve Chairman Jerome Powell’s semi-annual testimony to the US House of Representatives last week.

“Yields were actually higher until Mr. Powell’s dovish statement, which then put a cap on yields. Most benchmark bonds are mostly unchanged from last week’s levels,” the bond trader said in a Viber message.

Mr. Powell said the US economy “is still a ways off” from the levels the central bank’s expectations before narrowing its support to the economy, Reuters reported.

In testimony, Mr. Powell also said he is confident higher inflation was connected with the country’s post-pandemic reopening and will ease in the coming months. Data showed that consumer prices increased by the most in 13 years in June while producer prices accelerated to the largest annual increase in more than a decade.

The bond trader expects yields this week to move “sideways with a downward bias.”

“We shall monitor the presence of Delta variant [of the coronavirus] and its effect on phase of reopening,” the trader said.

“[This] week, market players will likely look towards the results of the 10-year auction for some direction although I expect yields to stay generally range bound,” Mr. Ladaban added.

Recognition and enforcement of foreign judgments in the Philippines

Asian universities and UP Diliman chancellorship